If Appsplit is any indication, either crowdfunding is the future of everything or there’s a crowdfunding gold rush. I’m going to bet it’s a little of both.

This new service allows programmers to crowdfund their projects. Why not use Kickstarter, you ask? Beats me, but here’s what’s up. Appsplit is first and foremost a place to put your app campaigns. You tell folks what you’re building (“An app that tells you what time it is in Fiji.”), how you want to be funded (an “Open” project allows you to keep the money even if the project isn’t funded), and how much you need. You then do a little marketing, tell your friends, and you’ve got an app. 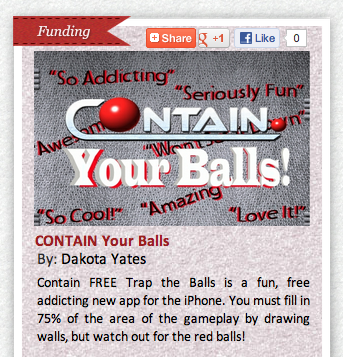 You can also sell the rights to certain apps or even sell shares in a company. Finally, you can find freelancers who might be interested in working with you on your idea.

The site, founded by Hussein Yahfoufi, recently relaunched as a crowdsourcing play and it’s running a handful of campaigns. Originally Yahfoufi planned the site to be a marketplace for app ownership and source code.

“Appsplit is a new platform meant to help those working and developing apps to move their app business forward. Whether they need to raise some cash, find someone to help them or just sell a piece of their app, appsplit can help. We are a new, small and very dedicated to helping each campaign owner succeed,” he said.

Now look: I think this is a good idea but is it really necessary? We have plenty of strong crowdfunding platforms already and one more – even one dedicated just to apps – might be overkill. However, you can presumably set up shop at multiple spots and keep raising money ad infinitum. I’ll give Yahfoufi credit for maintaining razor sharp focus on his niche and sometimes niches are the best places to be. I worry, however, if too many things become the Kickstarter of X we’re going to exit the golden age of crowdfunding and enter the bubble age.