Max Schrems, the Austrian founder of Europe Vs. Facebook, has forced Facebook to put proposed policy changes up for a vote by all its users. By mobilizing his privacy group to flood Facebook’s Site Governance page with pasted messages, many more than 7,000 comments were received on the proposal — the threshold for triggering a vote. Europe Vs. Facebook is demanding sweeping changes to Facebook’s product rather than the small policy changes found in the proposal

Today the one-week voting period opens on a set of a relatively benign changes and Facebook will notify users by web and mobile. If over 30% of Facebook’s active users, or 230 million people, vote for the changes they’ll go into effect, and if they vote against they’ll be scrapped. Otherwise Facebook will take the changes “under advisory”. Facebook’s Chief Privacy Officer for Policy Erin Egan told me yesterday the company will consider changing its site governance voting system to discourage votes being triggered by low-quality comments and adapt to the growing size of Facebook’s user base.

Users can check out the proposed changes to Facebook’s Statement of Rights and Responsibilities and its Data Use Policy, and an explanation of the changes, then vote until 9am PST on June 8th.

“I really don’t think any of our changes were controversial. [Max Schrems} is interested in us changing our product, but these revisions are about our policy. We can’t please everyone”, Egan told me. “We did reach the threshold because a viral meme was created [by Schrems asking users to blindly paste in the comment “I oppose the changes and want a vote about the demands on www.our-policy.org“], and unfortunately the result is a vote.” When the feedback period ended on May 18th, we noticed over 42,000 comments, most without any actual qualitative feedback, had been filed and a vote was inevitable.

This is only the second site governance vote in the history of Facebook. It set up the voting system in 2009 when it had just 200 million users, so the 7,000 comment threshold and the 30% required to make a vote binding seemed more appropriate. Now Facebook will consider upping the comment threshold, or even possibly doing away with the voting procedure.

Egan told me “Max is a user of ours and we appreciate his feedback, but we worry the voting threshold number may be incentivizing quantity over quality” in the policy comments Facebook receives. A new system would seek to get users actually reviewing the changes themselves and giving their own opinion, rather than being used as pawns by privacy activists.

I recommended Facebook employ a system similar to the agreements users approve when they install new software, where people need to actually have scrolled through the entire policy document before being allowed to vote or give feedback. Facebook’s director of corporate communications and public policy Barry Schnitt said “that’s a really good idea”. 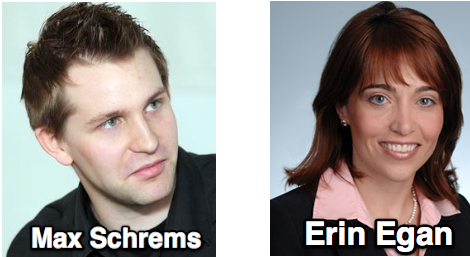 Instead, its demands include “We want Facebook to implement an ‘Opt-In’ instead of an “Opt-Out” system for all data use and all features” and “We want Facebook to limit the use of our data for advertisement“. These are much grander changes that would seriously hamper Facebook’s ability to launch new features and make money, and are unlikely to be adopted. There’s simply no way all 900 million+ users would be willing to constantly approve every little change Facebook makes.

By creating the “I oppose the changes” meme, Europe Vs. Facebook showed it would rather obstruct progress, even progress it had lobbied for, than provide real constructive criticism. While its allegiance to strict privacy could be viewed as admirable, its tampering with the commenting system cannot.

It’s important to note that despite flaws in the system, Facebook offers its users much, much more control of site governance that any other major website. When asked if it would like to see other sites adopt a policy feedback system, Schnitt said “Absolutely, we think users should demand this kind of thing, and they deserve it too.” When asked if Twitter and Google+ were giving people enough control, Schnitt replied “That’s for their users to decide.” 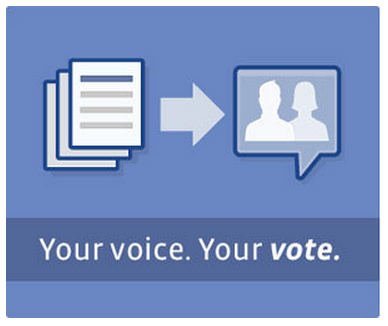 Facebook’s users will have until June 8th to vote on the Statement of Rights and Responsibilities and Data Use Policy changes. Users will be directed to the voting page from ads in the sidebar of Facebook’s website, and a banner at the top of its mobile interfaces. The most significant changes users will be voting on are: