If you hate accidental auto-sharing, you’re in luck. Now you have to be watching or reading something for at least 10 seconds before Facebook apps can auto-share the activity to your Timeline. That should drastically reduce the amount of crappy click-bait articles and video clips you see in the news feed and ticker.

Video apps must also now inform you that they auto-share and provide an option to opt out on the page where a video is watched. These rules could deflate the user counts of apps like Viddy and Socialcam.

It also recently added more requirements to its comprehensive checklist auto-sharing apps must follow. The debate rages on about whether “frictionless sharing” is the future of discovery or the death of curation, but at least Facebook is taking decisive steps to keep the worst content from spreading friend to friend. 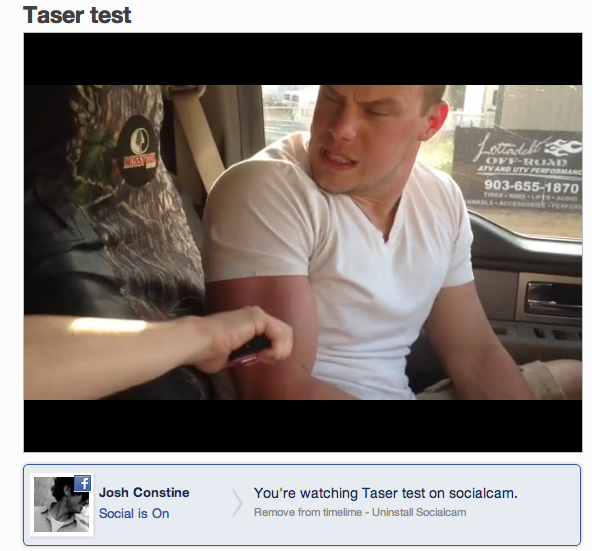 Facebook launched its Frictionless sharing apps eight months ago, where users authorize an app once and it can then publish on their behalf when they take certain actions. But rather than firm requirements for privacy controls it has merely encouraged best practices that developers “should” follow.

Unfortunately many developers only care about maximizing referral traffic and user counts, not the health of the Facebook experience. Back then I said Facebook might need to come up with a solution on its end rather than relying on the good hearts of developers. Now its is finally getting tough on spam, making the 10-second rule a firm requirement for news and video apps.

Here’s the exact text, with my emphasis added in bold: “Built-in watch and read actions can only be published after someone engages with the content for 10 or more seconds. If a video is shorter than 10 seconds, the viewer must watch the entire video.” For contrast, Facebook’s policy on providing sharing controls for most apps only says “You should allow people to turn sharing on or off for the content in your app, and the setting a user selects should persist.”

Thankfully, video apps are now more tightly controlled. That’s important because unlike utility apps or news readers where most content is professionally made or there’s little opportunity for deception, video apps like Viddy and Socialcam often feature user generated content that can be misleadingly titled. Spam and link-bait are in the eye of the beholder so some 15 year old might really want to share a “Sexy Girl’s Top Comes Off” video, even if others find that video of a girl putting down the top of her convertible to be misleading spam.

For instance, I was pissed off when Socialcam auto-shared that I had watched “Lil Wayne Fights A Basketball Player” when it was really a video pulled from YouTube of the rapper celebrating a NBA team’s win by chest-bumping with one of the athletes. A lack of regulation and suspected favoring by Facebook’s EdgeRank news feed sorting algorithm led video apps to grow like weeds during April. In fact, they’re springing up and growing so fast they can’t moderate their user generated content in real-time, so Facebook minimizing the spread of low-quality content is critical.

Now for video apps, “You must provide users with the ability to remove any video stories you publish to Facebook, and include this option on the same page where you host the video content” and “You must give the user clear, ongoing, and in-context messaging that their watch actions will be published on Facebook.” That means even if you get tricked into clicking, it will be obvious that your viewing activity will be shared and you can instantly nuke the story.

If Viddy and Socialcam’s traffic have been propped up by accidental views under 10-seconds each, the new rule could be a huge blow to their growth potential, and make their big funding rounds and enormous valuations seem even more ridiculous.

Beyond policy changes, Facebook has been tweaking how its displays auto-shared stories. It switched to a Trending Articles design that shows a blurb about a news article and not just link bait-prone headlines. Expect more product changes as Facebook adapts to emergent developer behavior. 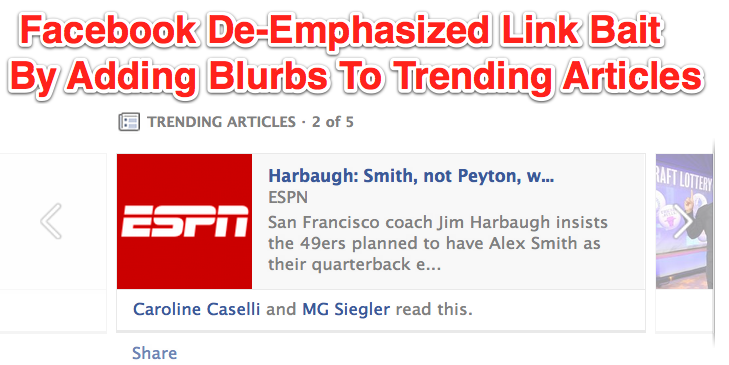 Frictionless sharing and the Open Graph platform are hugely ambitious moves for Facebook. They could provide the content and ad targeting necessary to grow its revenue such that it can justify its $104 billion IPO price, or at least its current $81 billion market cap. But they also push the limits of privacy and fundamentally change how we share from an explicit to an implicit action.

Developers can’t be left to police themselves, or many will be as spammy as possible. If the average user is going to get comfortable with auto-sharing, they need to know an impulse or accidental click won’t instantly share something awful with all their friends. A 10-second grace period is a good start.