Once something is on the Internet, it’s typically pretty hard to delete it. Unless somebody retweets a posting to Twitter, though, a deleted tweet is pretty much gone forever. With Politwoops, however, the Sunlight Foundation is now preserving some of these tweets for posterity. Politwoops follows all the 433 official Twitter accounts for members of Congress, as well as President Obama’s and Mitt Romney’s.

As Tom Lee, the director of Sunlight Labs, noted in today’s launch announcement, “in politics, Twitter is part of the ever-present ‘spin room’ of the digital age. But unlike other mediums, the record of events can be edited; tweets deleted from twitter.com are hard or impossible to see after the fact.”

Politwoops doesn’t just preserve these deleted tweets but also tells you when it was deleted and how long it took the politicians (or their staff members) to delete it.

The reasons why politicians would delete a tweet are often pretty obvious, as in the case of Senator Chuck Grassley from Iowa, whose account was hacked a few months ago. Some of the deleted tweets were probably just a bit too off-topic or controversial (or in all caps), but for the most part, they just include bad links, typos or other common mistakes.

This project, it is worth noting, was first developed by the Open State Foundation of The Netherlands. The U.S. version of Politwoops is actually the thirteenth local version of the service, which is already live in a number of other countries including Canada, Denmark, the Netherlands, Spain, Germany and France. 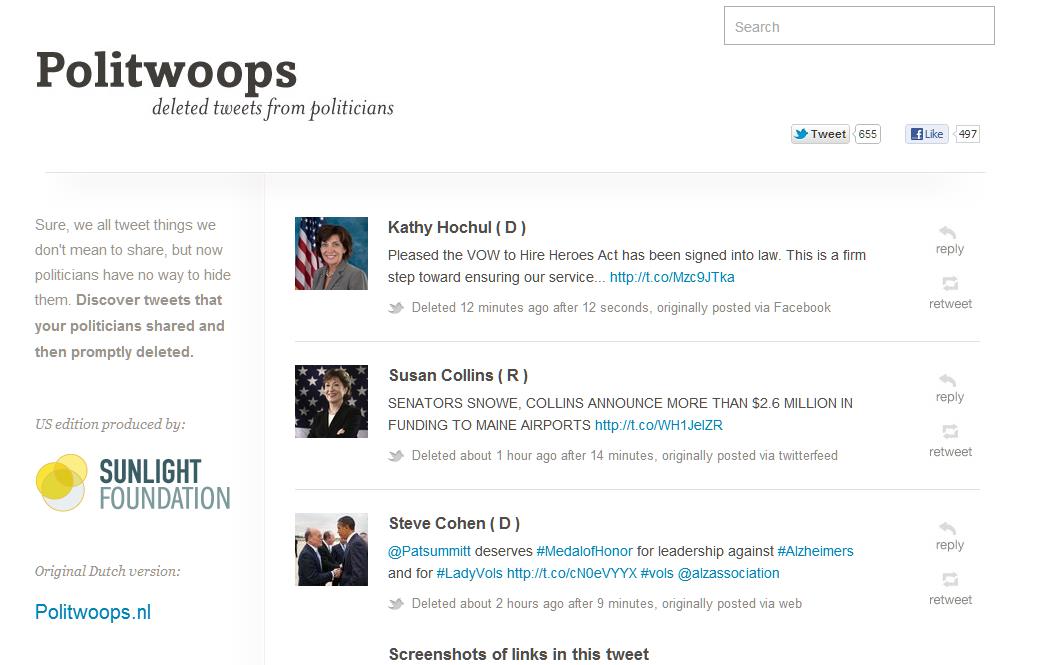