The startup previously raised $1.2 million from angels including Ron Conway, Chris Sacca, and Ashton Kutcher, but this is its first venture round. Co-founder and CEO Dan Siroker (who was director of analytics for Barack Obama’s presidential campaign in 2008) says he isn’t disclosing the amount — which is the exact thing that a tech journalist doesn’t want to hear — because he doesn’t want to get into a competition over valuation and “vanity metrics.”

So what are the numbers that Siroker thinks really matter? Revenue, for one. Optimizely says its revenue has increased 1,266 percent year-over-year. Percentage increases can be a little deceptive for young companies (Optimizely launched in 2010) since they’re starting from zero, but that’s still a pretty good sign. The company also says it’s now being used by more than 2,000 enterprises, including Starbucks, Disney, and Salesforce.com. And Siroker sent me the chart below (via BuiltWith), which shows percentage adoption among websites in a few categories. Overall, he says Optimizely has pulled ahead of Google Website Optimizer and is now gunning for market leader Omniture, specifically its Test & Target product.

Optimizely’s goal is to make it as easy as possible to run A/B tests on your websites. You just add a few lines of JavaScript to any page that you want to test, and you can use a graphical interface to change the layout, images, and text.

Siroker says the company’s next big launch will be a mobile product — he notes that smartphone screens have “limited real estate,” making it even more important to optimize the layout. More broadly, he says Optimizely sees a big opportunity in expanding beyond A/B testing altogether, into personalization. 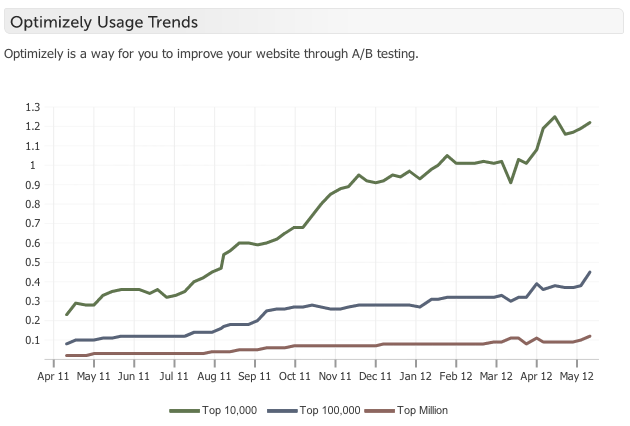