Google, together with its partner Samsung, launched a new Chromebook and its first desktop Chromebox today. The most important change to the new Samsung Series 5 Chromebook is that it is significantly faster. While earlier versions featured a battery-friendly Intel Atom chip, these first Chromebooks often felt underpowered. This new version features an Intel Core chip, as well as 4GB of RAM, an HD camera, two USB 2.0 ports and a 1280×800 display. Pricing starts at $449 for the WiFi-only version. While this is a nice update, what’s more interesting here is the launch of Google’s first Chromebox ($329), a Mac Mini-like desktop version of the Chromebook that features more ports than the Chromebook, though it is missing an SD card reader. Otherwise, though, its specs are pretty similar to the laptop version. This is the first time Google is officially putting ChromeOS on a desktop machine, something it hopes will make the browser-centric operating system more appealing to business customers.

The new Chromeboxes will come to Best Buy in the U.S. in the coming weeks. In the U.K., they are now available at PC World and Currys stores.

Besides all of this, Google also brought its more Windows-like version of ChromeOS to its stable release channel today. This new “app-centric user interface” features a more traditional window manager than the previous single browser-only versions. This new interface will be the default on the new ChromeOS devices and will also replace the current UI on existing Chromebooks. 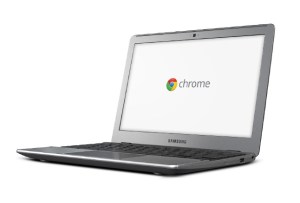 Google argues that ChromeOS’s “ease of setup and deployment results in a total cost of ownership for Chromebooks that’s less than half of that of traditional PCs. ” Google says the average 3-year saving per Chrome device when compared to a regular laptop is over $4,500. To emphasize this point, the company also announced a number of ChromeOS success and deployment stories today, including the fact that Dillard’s Inc says that it will deploy Chromeboxes in “hundreds of their retail locations” and that the California State Library system is making 1,000 Chromebooks available for checkout in public libraries across the state.

With this release, Google is also launching new pricing for its business and education management and support services. Businesses now pay a one-time fee of $150 and schools $30 per device to get a management console, 24/7 phone support and an extended hardware warranty. Google previously sold support as a monthly subscription, but now these prices are for the lifetime of the device.

Until now, the fact that Google Docs didn’t feature an offline mode made many potential users shy away from ChromeOS. Now, however, it looks like offline Google Docs support is coming soon. Google says that it will roll this feature out “over the next few weeks.” To bridge the gap, the new Chromebooks now also come with 12 free sessions of Gogo Inflight Internet.