Insta-who? Today Facebook begins rolling out Facebook Camera for iOS to English-speaking countries, a standalone photos app where you can shoot, filter, and share single or sets of photos and scroll through a feed of photos uploaded to Facebook by your friends. Developed by Facebook’s photos team without the help of Instagram because the acquisition deal hasn’t closed yet, Facebook Camera looks a lot like the app TechCrunch leaked images of a year ago, and is designed for quicker publishing than Facebook’s multi-featured primary mobile app.

Facebook Camera lets you rapidly pick one or more photos, apply filters, tag friends and locations, add a description, and post. While its 14 filters, batch uploads, and streamlined interface are a big step up from Facebook for iOS, the design isn’t as beautiful as Instagram and neither are the photos you’ll see in it. When asked if Facebook Camera would become a direct competitor to the photosharing network it bought last month, a spokesman told me “As Mark asserted, we’re committed to building and growing Instagram independently, so I anticipate some healthy competition.”

[Update: See why I think Facebook Camera could backfire and get us using all of Facebook’s apps less]

Though for now Facebook Camera is just for iOS in English-speaking countries (and will become available as soon as Apple can populate the App Store with it, if you don’t see it already) it will roll out internationally over the next few weeks as Facebook gets it translated. As for versions for Android, BlackBerry, and Windows Phone, I’m told “While we don’t comment on future products we are carefuly looking at what might make for agood Facebook photos experience across other platforms.”

But now Facebook has three apps for consumers — its primary app, Facebook Messenger, and now Facebook Camera (plus Facebook Pages Manager for Page admins). That means users might have to choose which to keep on their home screen, or could end up sticking all three in a folder and become less likely to use any of them.

The app’s homescreen includes a camera button for shooting new photos, and quick access to the last few images in your camera roll for instant uploading. By default you’ll see a feed of photos from your friends that’s basically your news feed but only photo posts. You can also view a feed of just photos you’ve taken or been tagged in. The feeds update in real time, you can Like with a single click, and the comment button pops up as an overlay rather than forcing you to load a separate screen. The browsing experience is smooth, though browsing can only be done in portrait mode so standard photos appear square with their sides or top and bottom cut off. You have to click them and sometimes turn your device to view them in full.

The best feature of Facebook Camera and its one real selling point over Instagram is multi-photo uploads. This helps you tell a story or share the best photos from a day’s outing in a single post. It’s great for if you can’t decide which shot is best and don’t want to go through the sharing flow over and over. The feature basically steamrolls Batch, a photosharing app specifically designed for uploading sets. Browsing multi-photo stories is smooth too, as they appear as one story in the feed showing the first photo, but you can swipe side to side to view the rest of the set. 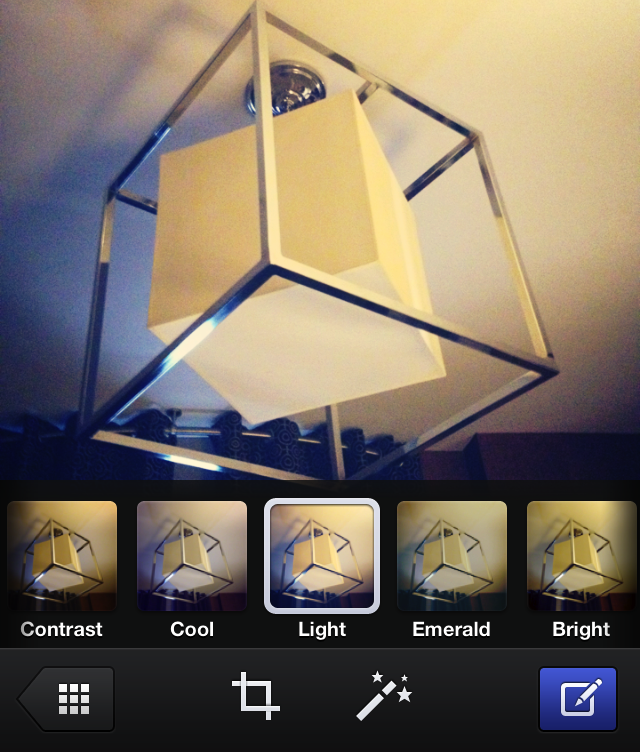 Rather than having to wait for a photo to load when you browse by like on Instagram, it appears as a blurry placeholder at first and then sharpens up, which is nice. Facebook Camera’s 14 filters are also more sensibly named with titles that describe how they change photos, such as Bright, Emerald, and Copper, rather than Instagram’s less indicative Hudson, Sutro, and Brannan. Facebook’s photos product manager Dirk Stoop tells me “We do hope to bring the best stuff from Facebook Camera to the other app” so filters, cropping, and batch uploads could appear in the main Facebook app soon.

Unfortunately, there are several flaws in the current version of Facebook Camera that seem especially glaring compared to Instagram. Like and comment icons and counts are overlaid on the photos, disturbing their appearance. When you click to view existing comments on a photo they take a few seconds to load, which can fool you into thinking they aren’t there. Instagram also has more filters, 17, plus light adjustment and tilt-shift that Facebook’s new app lack.

But the first thing you might notice is the photos are decidedly less beautiful than what you’ll see on Instagram. Most weren’t uploaded with Facebook Camera but rather through Facebook’s web interface, primary app, or other third-party apps, so they’re unfiltered, and weren’t necessarily taken with artistry in mind.

While Facebook may be late to the standalone photo app scene, you have to remember that while Instagram has hit 50 million downloads, Facebook has over 500 million mobile users, and somewhere around 220 million on iOS and Android. As the social network’s user base shifts to mobile, the app will be crucial to keeping people engaged.

Facebook Camera may not be perfect, but for those who don’t want to start a whole new social network for photosharing on Instagram, and want an app that sucks in photos shared by their Facebook friends from anywhere, including Instagram and Path, Facebook Camera could earn a spot on the homescreen. 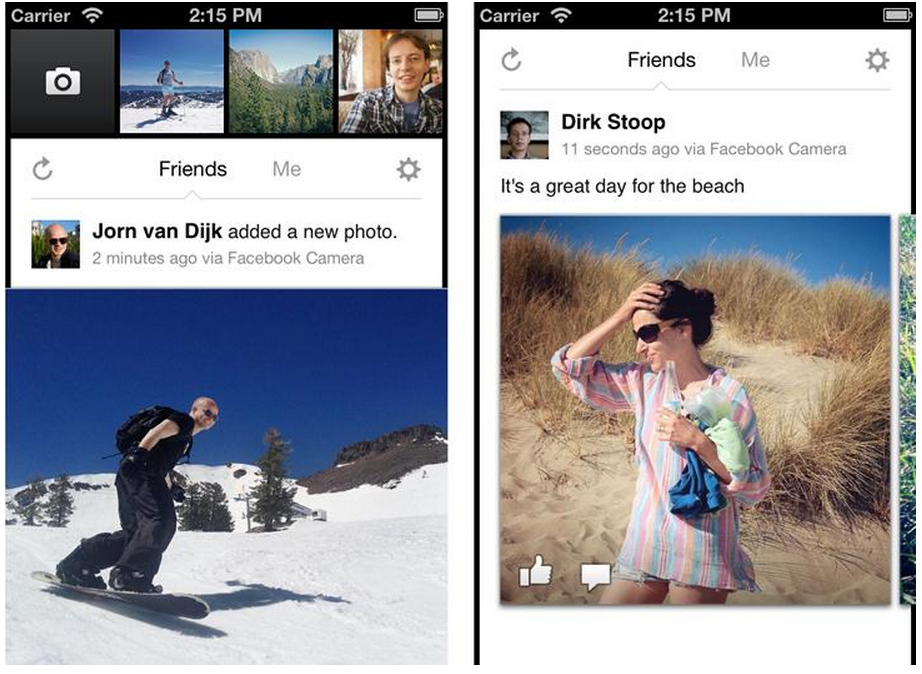