One of the hot companies at TechCrunch Disrupt in New York this week was the real-time people-powered translation service Babelverse. Quite often, though, Google Translate-style machine translation is good enough and there is clearly a huge market for all kinds of translation services. SayHi Translate, a $0.99 iOS app that focuses on machine translation, just announced that it has now translated over 10 million phrases since its launch just four weeks ago. To celebrate this milestone, SayHi is releasing version 2.0 of its app today, which features a redesigned and easier to use interface, as well as new controls over how its spoken translations sound. 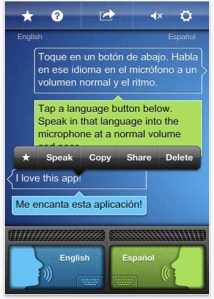 SayHi Translate speaks 33 languages and dialects, including English, Spanish, French, German, Mandarin and Russian. The app can translate between all of these. One of the nicest features of the services is that it uses a Nuance-powered voice recognition engine for 24 of the languages it supports. Thanks to this, you and the person you are talking to don’t have to write text into the app, which makes for a significantly more natural interaction if you are trying to get directions in a foreign city, for example.

With today’s update, the app now features an improved user interface and it also gives its users more control over how spoken translations sound. You can now also choose between male and female voices and adjust the speed of the spoken translations.

SayHi Translate’s CEO Lee Bossio tells me that the service uses a blend of “translation magic” on the backend, meaning that it using its own engine as well as a number of third-party services.

In my tests, the translations were surprisingly fast and accurate. Like most of these services, it works better with short sentences, but it also did a pretty good job with longer and more complex sentences as well.

Before launching SayHi Translate, the company focused on providing a similar service to enterprise customers in corporations, hospitals and government organizations. Since March, however, the company has focused on its consumer app and given that it’s been used over 10 million times now, this strategy is clearly paying off.