David Lawee, Google’s VP of Corporate Development, sat down for an informative chat with MG Siegler at Disrupt NYC this morning, and it wasn’t long before the conversation turned to Google’s track record with mergers and acquisitions.

Doing the math, that works out to roughly 40 deals that didn’t quite pan out the way the folks in Mountain View had hoped. Of course, some them are more pronounced than others. When asked about Slide — the social gaming company that Google picked up for a cool $228 million only to shutter their services a year later — Lawee noted that Slide was “definitely” in that bottom third.

But what does it actually mean for an acquisition to fail (or succeed) for Google?

When pressed on the issue, Lawee pointed out that each deal has its own particular metrics that Google weighed before they chalked it up as a success or failure. Widevine, the streaming video DRM solution that Google acquired in late 2010 is measured for instance in how many devices it’s reached (and Lawee noted that number has doubled in a year, firmly ensconcing it that top tier of wins for them).

The teams attached to these acquisitions moved on to different roles within Google (and often very fruitful ones), but they ultimately didn’t meet the “four or five” key goals that Google had in mind when they inked their deal. Aardvark was a prominent example — Lawee mentioned that M&A team felt very strongly about the role social Q&A would play in search, but Google’s search organization felt differently. Though the Aardvark team (including co-founder Max Ventilla) found a new home working on Google’s Knowledge Graph, the acquisition is still considered a failure because those original goals were never met.

The pair also tackled Google’s recently-completed Motorola Mobility acquisition, and Lawee was quick to shoot down the notion that it was a spur of the moment deal. He was, though, a bit more hesitant to tackle the notion that the Motorola deal was put together because of their bid to nab Nortel’s patents.

“It’s a complicated area, and it’s not an area that one can just dabble in.” Lawee said.

Oh, and just in case you were wondering, he says Google still doesn’t want to buy Twitter. 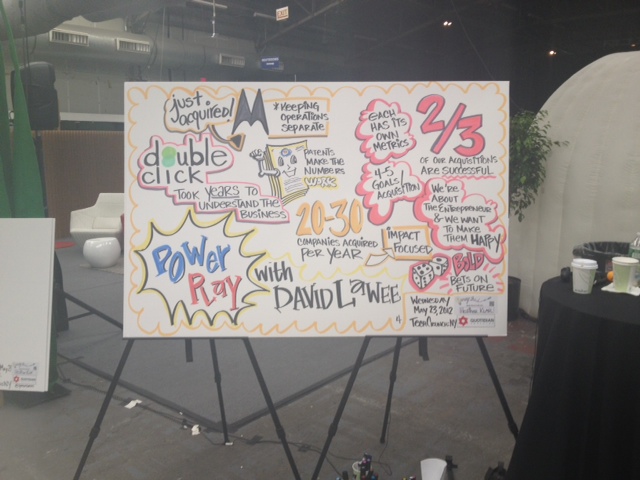