Pulse, the popular free mobile news reader for iPhone, iPad and Android, could soon get ads. Until now, Pulse, which launched its first app in May 2010, was ad free and the company focused more on user acquisition than monetizing its service. A new job posting on Pulse’s site, however, clearly spells out the company’s plans to start making money through advertising in the near future. The company is currently looking for its first sales executive and says that it is “building innovative and disruptive ways of empowering brands to share their content and tell their story in a way that’s natural and native to Pulse.”

Even though it’s now been more than two years since its launch, the company never revealed its monetization plans beyond a few glimpses here and there. Now it looks like some form of advertising is definitely coming to Pulse. Judging from this announcement, though, those ads won’t be standard mobile ads.

The job posting stresses that Pulse is not looking to sell standard ad units and is instead “reinventing what marketing can be and should be on mobile devices.” Pulse notes that, in the long run, it plans to build a global sales organization, but for now, the new sales executive’s job will be to establish the company’s relationship with brands and agencies and to evangelize the Pulse platform and the company’s approach to marketing. 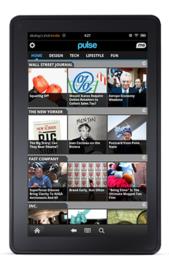 Asked about the job posting, Pulse CEO Akshay Kathari told us that Pulse ads won’t look and feel like ads. Instead, they will “resemble the high-quality content that keeps users coming back to the app.” As the product is still a work in progress, though, he wasn’t in a position to say more about it at this time.

So far, Pulse has raised $9.8 million. Its mobile apps had about 11 million users by the end of 2011 (up from just 1 million a year ago) and the company was seeing a new download every 2 seconds. Pulse also comes pre-loaded on a number of devices, including Amazon’s Kindle Fire.

It’s worth noting that, for a short time in 2010, Pulse was actually banned from the App Store for a few days after the New York Times complained that the app was using its content and making money off it (at that time, Pulse for iPad was still a $3.99 app). It’ll be interesting to see how Pulse plans to avoid similar issues once it starts selling its own ads.