It’s almost here. The big day. Can you feel the excitement? Yes, if all goes according to plan on Friday, Mark Zuckerberg will ring the NASDAQ bell in a hoodie, the big blue social network will go forward with one of the largest IPOs for an Internet company in history, the markets will hit a fever pitch, the Four Horseman of the Apocalypse will update their statuses — and the rest of us will just go back to using Twitter.

Nonetheless, Facebook is expected to go public at a valuation between $92 and $103 billion. As such, it’s pretty clear what Facebook is worth to us (really, to the market), but the real question is: How much are you worth to Facebook? Hmm?

Thanks to online privacy company Abine, we now have a simple tool by which we can calculate our monetary value to Facebook. In good old dollars and cents.

To illustrate the potential for Facebook to lose sight of the importance of the individual (and his or her privacy) amidst the pressure to maintain its ridiculously high valuation/metrics, Abine has created a quiz called the “Val-You Calculator,” which, based on your answers to seven questions, determines the dollar value you represent as a user.

These questions ask you where you live (most of Facebook’s ad revenue comes from North American companies), how many friends you have, whether or not you play Zynga games, for example, all in an effort to demonstrate that your personal data comes with an implicit dollar-value.

According to Abine, its Val-You Calculator uses data from Facebook’s S-1 filing, as well as “independent financial and market research analysts, Facebook advertisers, and our own internal modeling and estimates.” A little bit of magic, and presto, you can see how much revenue you generate for the little blue social network. 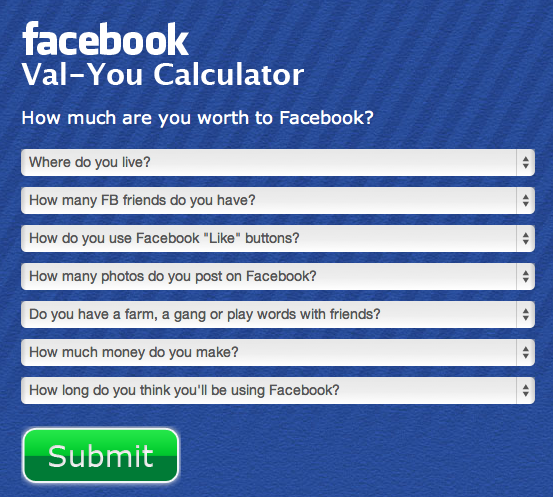 Of course, when it comes to IPOs, with a ton of financial information being disclosed for the first time, naturally the magnifying glasses come out, books are scrutinized, business models molested, etc. For better or for worse. Regardless of the hot air that gusts from pundits, privacy will continue to be a serious concern for Facebook users going forward. In fact, just last week, Facebook launched a major update to its privacy policies in compliance with an audit by the Irish Data Protection Commissioner.

Among those changes, Facebook one-upped Google and created the “Facebook Terms and Policies Hub” to bring its 10 critical privacy policy documents under one roof. As the social network explained in a blog post, the changes are being made in an effort to increase the level of transparency around its handling of users’ personal data. And, as Josh details, for the most part, these changes seem logical, user friendly, and anything but suspicious, as some might have you believe.

That being said, with a scary-big user base creating even scarier amounts of big data, and considering that its model revolves around revenue derived from targeted, personalized ads, privacy advocates believe that the coming pressure to beat projections in the public markets leaves our personal data in a precarious position. The shortest line between A and big quarterly gains is a straight line to selling our private data to marketers.

In a recent survey, Abine found that 75 percent of its users wouldn’t leave Facebook alone in a dark room with their data, a sentiment that was confirmed by an independent AP-ABC poll in which nearly 60 percent of respondents had “little to no trust in Facebook to keep their information private.”

By updating its privacy policies, Facebook is working to allay those concerns, and it’s made progress. Yet, as Josh points out, privacy policy won’t be its only concern. Beyond making moves to stay on the right side of the law, down the road Facebook may face government regulation in regard to privacy. If a governing body were to place restrictions on how the company launches products, or displays features, for example, it could become increasingly vulnerable to the competition.

As it feels the pressure to drive big returns, Facebook may be forced to devise more clever ways to utilize data. It can think bigger, and will, but then it has to worry about mobile. As it has itself admitted, mobile is a big threat, and the company’s growth may be impeded as it works to keep up adequate transparency and has to show fewer ads per user as a result.

Whether or not this will significantly affect revenue in the long-term remains to be seen, however, thanks to Abine and Val-You, at the very least, Facebook will know exactly how much ad revenue each of its users represent. And that, my friends, is priceless.

Sadly, I was only worth a little over $50 to Facebook. Clearly, I’m not a good customer. What about you?

For more on Abine, find them here, or get your own Val-You appraisal here.