My first-ever Disrupt was a year ago, almost exactly. I had just started working for TechCrunch and Disrupt NYC 2011 was my initiation, of sorts. I had heard of Disrupt before — but witnessing the Battlefield first-hand, from the front row no less, is a totally different beast.

Every uncertain moment or slip-up during a presentation left me worried, and each triumphant joke or wondrous moment made me clap as loud as the folks in the back. Looking back on that time, a handful of startups are still locked safely away in my memory, the most prominent of all being Sonar.

That’s because the second I heard the concept, I knew it would be a big deal. Considering a host of new apps on the market that do similar things, like Highlight and Crowded Room, I was right. But as Disrupt NYC 2012 (tickets here) draws nigh, I couldn’t help but wonder what life has been like for Brett Martin and his social proximity company since launching on the main stage just a year ago.

I set out on a mission to find out the answer, and Brett Martin was kind enough to oblige.

Here’s the interview in its entirety:

TechCrunch: So tell me what it was like to launch at Disrupt last year.

Sonar: Well, first of all, Disrupt is an amazing, unbelievable, could-not-have-imagined-a-better platform for launching a company. Like all the startups involved, we hadn’t told anyone what we were doing until the moment Sonar launched. We didn’t know what to expect, or if the reaction would be good. But the response was amazing.

We had all of these people talking to us about how excited they were about what we were doing. Whether it was advertising or recruiting or PR, people picked up on the fact that Sonar would change industries. The platform gave us the opportunity to get out and start fast.

TC: So what have you been up to since then?

Sonar: More of the same. We get to meet the leading VCs, and brands are knocking down our door trying to partner with us. We’ve done a couple select partnerships with companies we really like that fit our vision. One was a partnership with Wired Magazine, where we provided personalized product recommendations in their pop-up store for anyone based on their online identities.

SXSW was amazing this year. Because of the press we got early on at Disrupt, everyone already knew what we were doing and wanted to talk to us. Our space really heated up, but everyone knew about us as the early proximity social network because of Disrupt.

Another thing we noticed about launching at Disrupt is that it offers a huge mobile platform. We launched at the Battlefield, and by the next day, when we went on stage for the finals, we were being used in 35 different countries. And what’s awesome is that that global reach has persisted through today. Because of the way Sonar works, people from everywhere are using it trying to connect.

We’ve also been growing. We went from a three-person staff at Disrupt to nine people now, and we’re still hiring developers for back-end, front-end, and mobile.

TC: So what do you think a Disrupt launch did for your company?

Sonar: Simply put, it gave us the opportunity to cement ourselves in proximity social networking. It was the first time people had heard about this type of thing. We have some more exciting stuff in the works that’s not ready to go out. 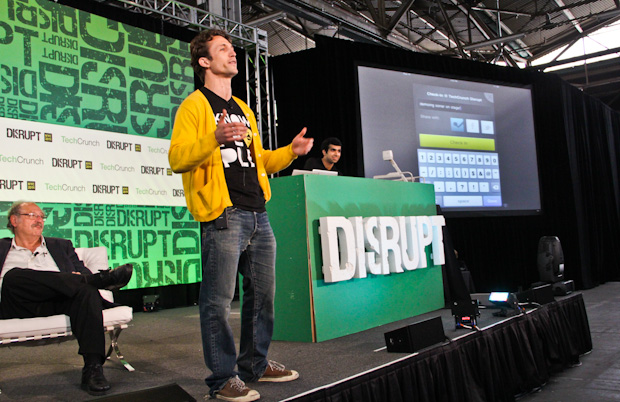 TC: I think one of the greatest things about the Battlefield is the Q&A. It can make or break a presentation, and with hard-hitting judges like Michael Arrington and Marissa Mayer up there, it can probably be a really stressful moment. Do you feel like the Battlefield Q&A helped you refine your product, or would you say it was a hindrance in any way? In short, how did you feel about the Disrupt Q&A during your launch?

Sonar: This is how I see it: if you’re a startup CEO or founder, it’s your job to be able to answer difficult questions on the spot in front of thousands of people. Disrupt is a great place to separate the weak from the strong. It really is a battleground — a rite of passage. If someone didn’t have a great launch it won’t kill the company. Companies aren’t built on a launch.

And one more thing: Arrington is a big teddy bear. I don’t know why people are so scared of him. He’s big and cuddly.

TC: How would you say Disrupt participating played into your platform with the media?

Sonar: Disrupt got the ball rolling. Every major media outlet out there covers us. A few weeks ago we got a call from MSNBC to talk about the JOBS act.

I find that the most common thing people say when they meet me is “Oh, I’ve heard of Sonar. I saw your video from Disrupt.” That video is a lot of people’s first perception of Sonar. So it’s a good thing the pitch went well.

TC: I guess my last question is more for new entrepreneurs than for you specifically, but there are hundreds of young entrepreneurs and startups headed to the city this week to be a part of Disrupt, whether they’re in the audience, in Startup Alley or on stage for the Battlefield. What advice would you give to them?

Sonar: Know your pitch. Practice what you’re going to say, of course, but don’t forget to listen.

Listen to the judges, listen to the announcers and the way you’re being presented, and listen to the crowd’s reaction. There are so many interesting, thoughtful people out there, and Disrupt is the opportunity to get in front of them.