Mozilla was late to the mobile revolution and is still playing catch-up with Firefox for mobile. It’s starting to look as if Firefox for Android is slowly becoming a competitive player on Google’s platform, though. Today, Mozilla is launching its most radical redesign of its browser for Android in beta. This new version features a redesigned interface that, according to Mozilla, “blends in with the Android user interface.” The beta now also features support for Adobe’s Flash plugin, as well as the usual performance improvements and bug fixes. 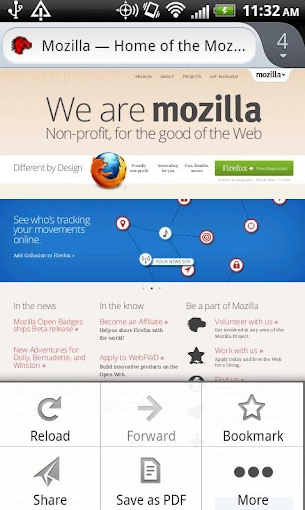 Firefox for Android Beta is now available in Google Play and unlike Google’s own impressive Chrome for Android, it will work on any phone running Android 2.2 and above (including, of course, Ice Cream Sandwich). For now, it’s only available in English, though.

The highlight of this release is, without doubt, the new native user interface. This new update, however, also features an improved version of what Mozilla calls the “Awesome Screen,” its smart mobile homepage for Firefox.

In addition, the Firefox team has worked on improving startup and response times for the browser, as well as the browser’s overall graphic performance. Thanks to hardware acceleration, web apps and games on the browser should now also run significantly more smoothly on Firefox for Android. Redoing the user interface, of course, should also give the browser a bit of a speed bump.

The fact that this beta now supports Flash will likely raise some eyebrows. It’s worth noting, though, that by default, plugins are only loaded on touch.