Big mobile plans afoot for Baidu, the Google of China that leads in search and has launched a host of other services in the wake of that business. The company today unveiled the first smartphone to be built on its own platform, the Changhong H5018. And while that device is designed on a “forked” version of Android — forked Android devices being very popular in China — Baidu says that it doesn’t want to stop there: the idea is to take its platform, the Baidu Cloud Smart Terminal, to other operating systems like Windows Phone and iOS.

“We want Baidu’s Cloud Smart Terminal to function as a platform that sits on top of all operating systems, such as Windows Phone and iOS,” Kaiser Kuo, a spokesperson for Baidu, told TechCrunch today.

“We are not yet working on a Windows Phone device but the hope is to make one,” he noted, adding that while Baidu plans to leave no stone unturned in its strategy, “some stones are proving to be more recalcitrant than others.” That is likely a nod to Apple and how Baidu could develop its platform on iOS without completely ruining its relationship with the iPhone giant.

Mobile is a big and growing area for Baidu. In Q1, it noted that 20 percent of all of its search traffic is now coming from mobile — it is already the leading search engine in official Android devices with 80 percent penetration, Kuo noted — and he added that the mobile traffic percentage is “growing rapidly”, almost certainly faster than its more mature traffic on fixed Internet devices. At the same time, mobile continues to boom in China, with the country now outstripping the U.S. and the world’s biggest smartphone market. 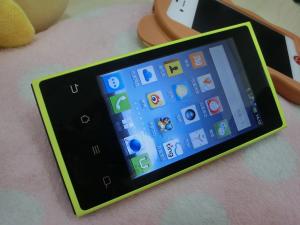 The Changhong H5018 is Baidu’s big strategy to create a device that will appeal to the less affluent demographic in the country. While the iPhone has proven to be hugely popular in China, it is sold at a premium price and that cuts out large parts of the addressable market that cannot afford it. Kuo notes that at the moment there are some 1 billion mobile users in the country still on feature devices. “It’s a market dominated by feature phones that prevent users from taking full advantage of the Internet,” he said. “There is a tremendous market for low-priced but feature-laden smartphones, and this product fits that niche very well.”

It’s understood that while the basic price for the device will be 1,000 yuan (around $159), it will be sold through resellers that will attach data and calling tariffs to the device — the first named carrier is China Unicom — and subsidize the cost of the handset in the process. The phone will start to sell later this year, the company says.

Part of the reason the device will be priced so inexpensively, Kuo said, is because most of the services that Baidu is loading into the device will be cloud-based. That means the device does not need to have as much processing power built into it. “You don’t need a lot of power, just the ability to connect to the Internet because we are shifting the computing from the terminal back to the cloud,” he noted.

Among the services will be a cloud-based storage service, location-based services and Baidu Map, voice recognition and handwriting-based search input, Baidu Music and services to recharge your call and data credits on the device.

In other respects the device sounds like it will be very much on par with other basic smartphones: 3.5-inch touch screen; 3G connectivity; 3 megapixel camera and a 1400mAh battery.

The phone is being made by Foxconn and that in itself is an interesting development and shows how the manufacturing giant — partner to Apple for the iPhone and iPad among many others — also has ambitions to position itself as a mobile brand in its own right.

It also follows on from an earlier model that Baidu had released in conjunction with Dell, which Kuo described as the “precursor” to the phone launched today.

Baidu’s plans to extend its circle of partners for the phones was also indirectly confirmed by its VP of engineering Jing Wang, who noted in a company statement that “The Baidu Cloud Smart terminal platform is a crucial step in Baidu’s overall Cloud strategy in the mobile Internet sphere…it will significantly lower manufacturing costs for many mobile manufacturers and cooperating partners. Baidu is joining hands with hardware vendors, terminal manufacturers, developers and others in the industry so that everyone along the whole value chain is a winner.”

Although Baidu certainly has a lot of ambition, for now it looks like most of the mobile plan is limited to China. Although Baidu has “dipped its toe” into other countries such as Thailand, Vietnam, Japan and Egypt, there are currently no plans to offer Baidu’s new phone in markets outside of the mainland. “The whole point is that it is supported by Baidu’s cloud services and all of these are currently in Chinese and not supported outside of China,” he noted. “When we have robust cloud offerings outside of China, only then would it make sense to offer terminals there.”