If social media mattered in elections, Ron Paul would have a realistic shot at being the Republican nominee and Barack Obama would be on track to crush Mitt Romney in the biggest landslide in American history.

Despite the hype over follower counts, a new study shows that there’s no credible evidence that Twitter can be used to predict how elections will turn out. “It can be concluded that the predictive power of Twitter regarding elections has been greatly exaggerated,” writes computer science professor, Daniel Gayo-Avello, in an unusually strident rant (for an academic). Gayo’s conclusions are intuitive: social media users are an unrepresentative slice of voters, and tweets may not accurately reflect how voters behave.

And, his principles apply not to just Twitter, but to all social media. In reality, much of a candidate’s social media “fans” are a composition of individuals who are not swayed by campaigns: reliable supporters, opposition spectators, and the growing army of non-voting 20-somethings.

Let’s look at the numbers: Paul has five times more Facebook fans than Rick Santorum (950K vs. 189K) and about 50% of the current front runner, Mitt Romney (1.67M). Yet, Santorum narrowly lost to Romney, and Paul lost by a landslide to both. In other words, the number of social media followers has little correlation with electoral wins.

Aware that raw follower count is an empty campaign asset, social scientists have attempted to analyze whether social media “sentiment,” or tone of the discussion, can reveal how much a candidate is liked, and therefore which candidate would win an election. According to arguably the top social media analytics firm in the industry, Crimson Hexagon, Paul outperformed all of his conservative counterparts as measured by total volume of Twitter mentions. Twitter chatter around Paul was of 26% of the total political conversation in the run up to the New Hampshire primary, while, Mitt Romney, the actual winner, had 22%. Paul, too, had a slight popularity advantage, with relatively more positive comments about him then his duller opponent (12% positive and 14% negative for Paul vs. 9% positive vs. 13% negative for Romney) 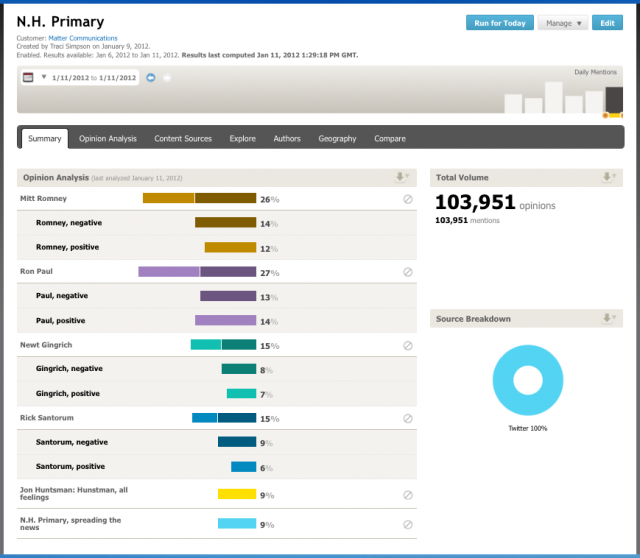 Why is social media such a false temptress for campaigns? First, Twitter is largely a shouting match among a small percentage of of hyper-vocal users: 50% of the most influential tweets are produced by the top 0.05% of users and most users are inactive [PDF].

And, the lopsided political demographic of Internet users doesn’t end with Twitter. For instance, the legalization of marijuana continues to haunt President Obama whenever he’s asked questions from an Internet audience (whether on YouTube or through the giggly Twitter representative of Jimmy Fallon). And, while, yes, the war on drugs is an important issue to discuss (read: please don’t send me hate mail), we get the false sense from the Internet community that legalizing marijuana is more pressing than the combined threat of a recession, terrorism, a broken education system, and a nuclear-armed Iran. In other words, the “vocal minority” drowns out the voices of the “silent majority.”

Second, while young people dominate social media, they vote in negligible numbers. “If no one under the age of 30 had voted, Obama would have won every state he carried with the exception of two: Indiana and North Carolina,” write Chuck Todd and Sheldon Gawiser in How Barack Obama Won. More than any other generation in the past century, Gen Y is inundated with a peculiar brand of politically engaged, non-voting citizen, who would rather pitch a tent in Zuccotti park than schlep to a polling booth on election day (side note: are you listening Occupy Wall Street?! This is why the Tea Party is kicking your political butt).

So, when election day comes around, arm yourself with some healthy skepticism against amateur statisticians stoking the social media hype. For example, In 2010, the Facebook politics page put out a misleading post, “Facebook Fans Help Predict More Than 70% of Key Races.” The statistic is technically true, but correlation does not equal causation. Politicians with more Facebook fans are likely more popular with voters anyways, not because they had a crack social media team who could boost their fan count.

Additionally, while 81% of Senate candidates with more Facebook fans did win their race, 83% of incumbents also won re-election. Incumbents are simply more popular, both because they have the advantage of political office and because opponents want to follow their social media feeds by “fanning” their page. In this case, Facebook fans are paraded around as a key variable, when, in fact, Facebook fans are likely a symptom of popularity, not the cause.

This isn’t to say that social media is an inconsequential player in the political landscape. Candidate Barack Obama did more than broadcast press releases in 140 character chunks; he engaged fans, pioneered tools for organizing, and inspired a culture of viral artistry. However, since 2008, the world hasn’t seen much in the way of election innovation. Ultimately, it isn’t who’s listening, but who’s acting.