KLIK, the real-time, facial recognition iPhone camera app from Face.com, has released its official 1.0 version today. (The previous version, which debuted in January, was a beta). The production version of the app includes significantly enhanced recognition capabilities as well as – you guessed it! – photo filters. (Sigh, thanks Instagram.)

Despite hopping on the photo-filtering bandwagon, KLIK, if you haven’t yet tried it, is kind of cool. The app lets you take a picture of your friends, which it automatically recognizes, using Facebook as its photo-sourcing database. Of course, that means if your friends aren’t active Facebook users, it will have more trouble ID’ing them – but you’ve got to start somewhere. And Facebook’s 900+ million users is probably the best place (outside of Google images, perhaps) to train your face-detecting algorithms. 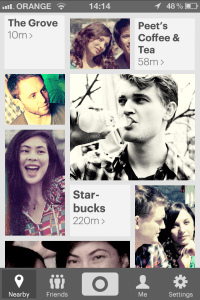 KLIK only recognizes faces’ belonging to your friends, however, so there’s no creepiness in what it’s doing. (Darn. I say bring on the creepy. Creepy is progressive.) But with KLIK, you already know the people in the photos, so it’s  just helping you tag them faster. After tagging the photos, they can then be shared to Facebook, Twitter or via email. The photo also appears in an in-app photostream, which shows you pictures taken by nearby friends. You can comment, like and geo-tag the photos in KLIK, too.

At the end of the day, KLIK probably won’t become your go-to camera replacement app, and you’ll probably forget to use it after some time. And even though it can face-detect folks in your phone’s camera roll, it’s not a batch process – you have to do things one-by-one. Still, the level of accuracy is impressive, and this is, after all, only the 1.0 release. Stay tuned.

You can grab KLIK from iTunes here.