Here’s a heart-warming tale of why you can’t second-guess yourself. Robert Cezar Matei had the chance to work for Instagram long-before it was acquired by Facebook for $1 billion, but followed his passion for knowledge and became the growth hacker for question & answer site Quora instead.

This is his answer on Quora (fittingly) for why he declined Instagram, and why he’s still smiling. “You make a gut call, then you walk into the future with serenity.”

Question – Did anyone decline an offer to work at Instagram?

Answer – Robert Cezar Matei: “Yeah, I had an offer to be the second engineering hire.

Kevin and Mike grew the team very slowly for most of their history: they’d hired only one engineer, Shayne, until just a few months prior to the acquisition, and they’d only made one other offer before me.

They were picky, but they also weren’t taken that seriously as a business by many people. Some thought of Instagram as “just an app”, and apps are made by hobbyists. Some engineers didn’t think it was an interesting place to work, because they did such a good job scaling that they made it look easy. Some people thought they were just a feature that Facebook or Twitter could co-opt. Some people had cofounder-level equity expectations because of the small size of the team. Some people didn’t see a long-term vision.

So they unveiled an API. They wrote about the engineering challenges they’d solved. They launched on Android. Growth kept up. Hiring picked up. Hindsight got sharper, and they got all the respect they deserved. I guess money talks in the end.

I knew Mike from Stanford, so a few days after they launched, I visited them at their rented desks at Dogpatch. I found them huddled over a monitor, struggling to keep up with the traffic from their first Techcrunch coverage. 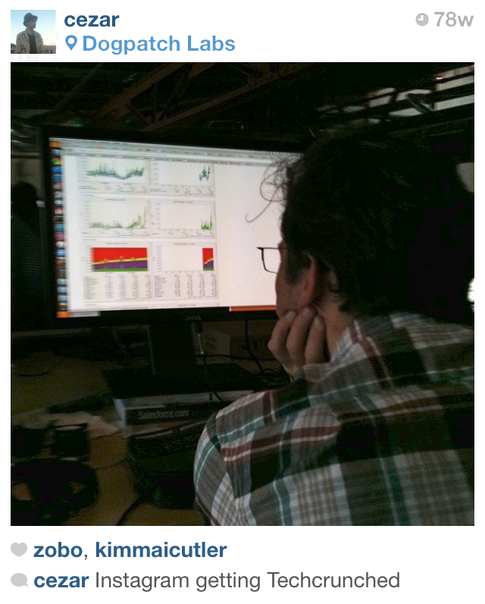 We talked about scaling. Kevin made some overture. I was taking a sabbatical, and wanted to focus on other things. But I spent time with them over the following months, sometimes working late nights out of their office.

When I was deciding where to work next, they made me build a follow recommendation algorithm using their API. I guess they liked it. We talked about their vision. We had sake in the Tenderloin at 1 in the morning. Kevin crafted a lovely letter, peppered with shared experiences and pictures, as he did for every offer. I was touched. 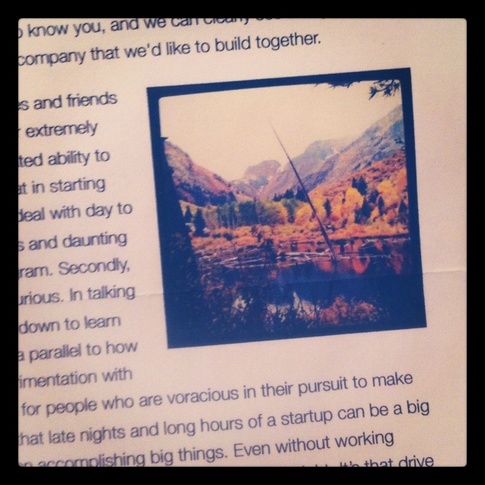 I believed in Instagram – it’s an incredible product. It makes self-expression easy. It makes the world beautiful. I thought it had a real shot at disrupting Facebook. Apparently Facebook thought so as well.

I ended up going to Quora, because I was even more passionate about the vision and the role. I had a chance to help build what could become the platform for all human knowledge, which I thought could be a revolution on the same level as Google. Little else mattered in the end.

If you’re in the Valley for any amount of time, you’ll have missed opportunities. As a sprightly Stanford sophomore, I rode my bike over to Facebook’s first Palo Alto office, back when the company was a handful of people. I walked in unannounced, cornered Dustin, and offered to help. I focused on school instead. I failed to be convinced by Keith and Jack Dorsey back when Square was in its infancy. Add Instagram to that list. Whatever. Opportunities were rarely as close as they might seem in hindsight. There are a million ways my life could have turned out worse, too.

And money doesn’t make that much of a difference. A friend and I* made games on the Facebook platform in its early years. There were days we made five figures. I didn’t do much with it – I bought a Mac and had one $17 martini at the Wynn. But I was high on the validation, and it did little but make me more aloof. The money went back into our company. Most of it’s gone. I’m kind of glad it is.

The morning of the acquisition, I pulled out my offer letter and smiled. I was lucky to be that close in the first place.

You can’t second-guess your decisions. You gather information, you think hard, you make a gut call, then you walk into the future with serenity. I made the decision I did for a hundred different reasons, most of which still hold. Instagram’s still fantastic. I still think Quora’s gonna be huge. And if it isn’t, I’ll still be smiling.

*Animal Apps with Dave Pekar (soon joined by Randal, Bobby, Danny, Diana, Evanand others). We eventually got acquired by Zynga, though I joined Quora instead.