I’ve heard quite a few people describe the first time they use Expensify as almost unnervingly impressive. Compared to what most of us are used to, Expensify’s super slick web and mobile apps make it seem almost too easy to file expense reports. Where before maybe you were very likely to just personally swallow the cost of a few work-related lunches and taxi rides per month to avoid the time-consuming expense filing process, it quickly becomes ridiculously simple to send them right along to your employer with the click of a button.

But even with that already solid user experience, it seems that Expensify is not done with its mission of making “expense reports that don’t suck” quite yet. Today, the San Francisco-based startup will launch new features aimed at making the whole process even easier. Expensify has updated its entire suite of mobile apps with a new feature called “Trips,” which lets people file work-related travel expenses and itineraries with Expensify as they book their trips. 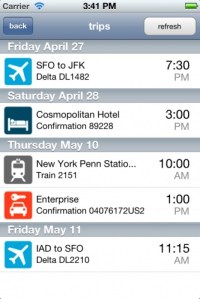 This lets people keep all their work travel expenses — from pre-ordered things such as flights and hotels, to on-the-spot things such as taxis and meals — in one place, organized by trip. Once the trip is done, a user can send the full itinerary off for employer reimbursement from his or her mobile device with one click.

The Overall State Of Expensify

On the whole, Expensify’s founder and CEO David Barrett tells me that the company’s growth has been quite strong since the product first launched to the public several years ago. It now has 950,000 users across 140,000 companies, and is processing $2 million in expense reports each day. The company, which counts hot companies such as Square, Evernote and Uber among its customers, expects to become profitable by the end of 2012.

At four years old, backed with a relatively modest $6.7 million in outside funding (much of which Barrett says is still in the bank), and 17 full-time employees, Expensify seems to punch above its weight in a lot of ways.

So we were pleased to sit down with Barrett at TechCrunch TV to get the rundown in person on Expensify’s growth thus far and its plans for the future. Watch the video embedded above to hear about the new mobile updates, why Expensify prefers to hire engineers that are generalists instead of specialists, why starting Expensify in a relative state of ignorance ended up leading to the company’s current bliss, and more.