Nielsen today became the latest analyst house to call it for smartphones outnumbering more basic devices in the U.S. The company says that in March 2012 smartphones were in use by 50.4 percent of consumers in the country, with Android continuing its domination in the space, accounting for 48.5 percent of all smartphone handsets.

Apple is not a very close second, at 32 percent, but through that percentage it has remained the single-biggest smartphone handset brand.

The 50.4 percentage of smartphones represents growth of about three percent since December 2011, when 47.8 percent of mobile consumers were using smartphones. That seems to suggest that while smartphone penetration continues to grow, the numbers seem to be slowing down a bit in the U.S. 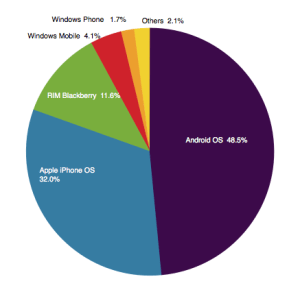 Nielsen also broke out some numbers on how different ethnic groups are using smartphones. Asian Americans, it notes, have the highest usage, at 67.3 percent using a smartphone as their primary mobile handset.

Hispanics were in second place with 57.3 percent of the group using smartphones, with African Americans closely following with 54.4 percent. Whites had the lowest penetration of all, with 44.7 percent.

Nielsen doesn’t really give an explanation for why these percentages play out as they do — but one guess for the lower number among whites is that perhaps they were some of the earlier adopters with previous generations of mobile handsets and so  are therefore slower to convert to the newer devices. 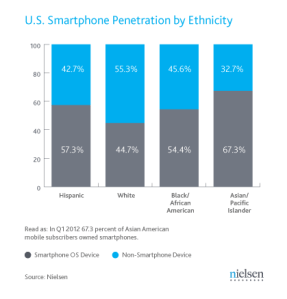 Another interesting point is that apparently women are edging out men a bit when it comes to smartphone usage in the U.S. 50.9 percent of females had smartphones, while among men it was 50.1 percent. Unsurprisingly, younger users are the most smartphone-savvy, with two out of three 25-34 year-olds using more advanced mobile handsets.