As NFC continues to see growing adoption, we are still noticing mobile payment solutions that don’t use the technology picking up more traction — and funding: one of the latest comes from Germany, where a Berlin-based company called Orderbird has picked up a €2.7 million ($3.5 million) round for a service that lets restaurants use iOS devices to take customer’s food orders, send them to the kitchen and act as a “cash register” to process the payments at the end.

The round was led by Alstin, a holding company headed by German financier Carsten Maschmeyer, who invested €2.4 million, with another €300,000 coming from angels and existing strategic investors backing Orderbird. (They include Lars Kamp, Carlo Kölzer and Tom Köhl.) The company has raised €3.2 million ($4.2 million) since opening for business in February 2011.

The funding for Orderbird comes at the same time that companies like Square and PayPal, with its Here service, continue to make inroads with their own non-NFC-based mobile payments services. And the food services side of the equation has seen an equally big push, with Just-Eat earlier this week raising $64 million for its online takeout aggregation service.

A service like Orderbird could become a likely partner for a company like PayPal, which offers the payment piece for merchants but little in the way of customized services to make that payment integrated with other functions. And given that PayPal has not yet expanded Here to Europe, partnering with a company building up relationships and a customer base here could be a useful way for PayPal to make a quick entry.

Jakob Schreyer, the founder and CEO of Orderbird, says there are already 300 paying customers using Orderbird in Germany, Austria and Switzerland, where the service integrates with products from companies like Epsom and Matrix POS (another strategic investor), which are already widely used in point-of-sale services. 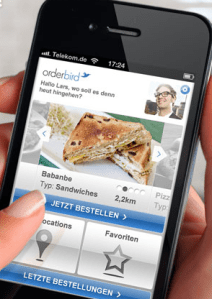 He says the company plans to use the funds to extend that to further European markets like the UK, as well as to start making moves into the U.S. later this year.

Orderbird is hoping that its payment solution, which has been specifically tailored to the restaurant trade — featuring ways of customizing menus and offering other tags that are typical for food ordering, as well as an analytics tool that lets a restaurateur look at all the data that gets collected through the system — will help it compete in a crowded market all competing for the same piece of business from the multibillion-dollar food service industry.

In the U.S. it will face significant competition from the likes of the mobile payment consortium Isis, as well as solutions more specifically aimed at the same restaurant sector Orderbird is targeting, such as POSLavu, among others.

That’s where the funding will also come in handy, in the form of beefing up the product and business to get more competitive advantage. Schreyer says Orderbird plans to hire more engineers and sales people as it looks to expand the kinds of services it offers through its platform. Future products that Orderbird is currently trialling include services that let users order their own food (instead of via a waiter), either in the restaurant itself or as a pre-order ahead of visiting the venture to pick it up.