Japanese gaming giant GREE just acquired mid-core, mobile game developer Funzio for $210 million in an all-cash deal that should boost its ability to build games for Western audiences. Funzio is behind Crime City, Modern War and Kingdom Age, which are graphical RPGs that have had more than 20 million downloads on Apple’s iOS, Android or Facebook platforms.

I had heard a few weeks back that Funzio was in a fundraising process at a $350 million post-money valuation and had also been loosely talking to various buyers in an auction-style process. Apparently, the fundraising efforts helped tip Funzio into a sale, but maybe not at the valuation I had originally heard about. Still, $210 million is not bad at all, considering that the company had raised about $20 million to date from IDG Ventures and Playdom co-founder Rick Thompson. For comparison, Draw Something-maker OMGPOP went to Zynga for $180 million in cash plus an undisclosed earnout.

Why did GREE buy Funzio? GREE is a multi-billion dollar mobile gaming company from Japan that is trying to break into Western markets. Its profit margins put Zynga to shame, but the company is running out of room to grow as its home country becomes saturated. GREE bought a gaming network OpenFeint for $104 million last year as part of that effort.

But the thing about GREE is that it is a dual platform provider and game developer, so OpenFeint only really addressed one side of its needs. OpenFeint was the platform and GREE needs in-house development capabilities, for which it has been hiring very aggressively in the Bay Area. Funzio should help with this after GREE scouted many targets over the past few months. Early-stage talks with at least two other game developers and platforms didn’t work out for various reasons. They had also looked at OMGPOP, but didn’t move fast enough because Zynga’s chief executive Mark Pincus locked that deal down in nine days.

GREE got Funzio though. One thing that almost certainly helped were close ties between executives at both companies. Funzio’s vice president of business development Jamil Moledina worked alongside GREE’s senior vice president of corporate development Shanti Bergel while at EA. Both left EA for GREE and Funzio less than a year ago.

With the deal, GREE brings on some fairly experienced hands in the gaming business. Funzio’s chief executive Ken Chiu had previously sold a company to Zynga and he and Funzio’s chief operating officer Anil Dharni had also helped found another notable mobile game developer Storm8, before they split with the other original co-founders.

Unlike last time, when GREE revealed much of OpenFeint’s cap table and the fact that it only made $282,500 in the previous year, the company is being super-secret(!) about Funzio’s details. It doesn’t say how much Funzio earned in the past year or what the acquisition’s impact will be on GREE’s earnings. It doesn’t say which investors own what, except to say that institutional investors owned 58.1 percent of the company. Another individual investor, presumably Rick Thompson, owns 10.1 percent of the company. That leaves 31.1 percent, or $65.3 million, for founders, minority investors and employees. 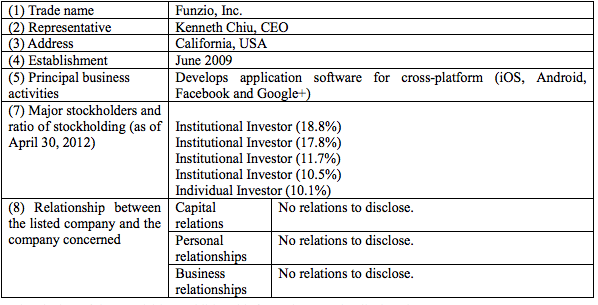 “The team at Funzio is creating some of the best mobile games in the world today. This acquisition allows us to join their talent and expertise with our vision for a mobile social gaming ecosystem.” said Naoki Aoyagi, Chief Executive Officer of GREE International. “We are extremely excited to expand our mid-core portfolio and continue to show how the mobile games market is the inevitable next step for gamers worldwide.”

“GREE shares our vision of a mobile world where people can play together wherever and whenever they are,” said Ken Chiu, CEO and Founder of Funzio. “We feel strongly that our experience in creating unique games for the mid-core market and GREE’s expertise in bringing the mobile games to the worldwide community is a perfect match.”