The race to be the “Instagram for video” is hotter than ever, and Socialcam, the app that spun out of video sharing pioneer Justin.tv last year and was part of Y Combinator’s winter 2012 class, is hustling hard for the lead. The company has raised seed funding from a group of angel investors that reads like a “who’s who” list of tech and entertainment industry heavyweights.

I’ve been hearing whispers about Socialcam’s crazy angel round for weeks now, and I’ve finally verified the full list of the startup’s seed backers. Unfortunately I’ve not been able to ascertain the exact amount of money the company has raised, though — when I reached out to Socialcam CEO Michael Seibel for more detail today, he would only say that “the list speaks for itself.” (Don’t worry, I’ll keep working on getting that dollar amount.)

I’ve pasted the entire list at the bottom of this post, but some of the names include (in no particular order): Tim Draper, Yuri Milner, Ari Emmanuel, Laurene Powell Jobs, Ashton Kutcher, Brian Chesky, Paul Buchheit, Alexis Ohanian, and many more.

The Battle For Users

Socialcam’s chief competitor is Viddy, an app that also lets users shoot, edit and share videos from their smartphones, and the battle between the two companies is fast and furious. Earlier today Socialcam pulled past Viddy as the top video/photo app in the iTunes app store (see screenshot at right) — but it’s been a horse race of sorts, as the two apps have switched spots on the list several times since I started writing this article. 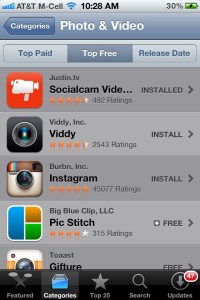 As far as user numbers go, I’m hearing that Socialcam has pushed past the 20 million mark (just last week the number was at around 12 million.) Viddy reportedly just passed 15 million users.

Now, one detail is very important to understand: These user numbers do not represent the downloads Socialcam and Viddy have as apps on mobile devices — they’re the number of people who have downloaded the apps on Facebook. Both Socialcam and Viddy have enjoyed viral growth on the Facebook platform, as people are curious to watch the videos posted by their friends. But that does not necessarily mean they themselves become avid Socialcam or Viddy users. It takes a bit more commitment to download an app to your iPhone or Android device, and neither company has released those figures yet.

More comparisons between the two apps: Socialcam still has just three full-time employees, compared to Viddy’s twenty-some, though Seibel tells me his company is looking to hire “aggressively” in the weeks ahead. Viddy has raised $6 million in Series A funding and is said to be in the process of raising some $30 more at a sky-high $370 million valuation. Socialcam, again, is staying mum on its exact funding numbers.

Silicon Valley Vs. Hollywood? Not Exactly

Socialcam is based in San Francisco while Viddy is based in Los Angeles, so the apps have reputations for attracting different crowds as investors and users: The Silicon Valley set for Socialcam, the Hollywood crowd for Viddy. But that geographical characterization is increasingly inaccurate. Socialcam has nabbed Hollywood power agent Ari Emmanuel as a backer, and Britney Spears apparently just joined the service this past weekend posting a video of her sons dancing around. Viddy meanwhile counts Twitter co-founder Biz Stone as an investor, and Mark Zuckerberg joined the service yesterday to post a video of his dog.

One thing is for sure: The battle here is far from over — and Instagram itself could still emerge as the Instagram for video — but at the moment it’s pretty fun to watch it all play out.

As promised, here is the full list of Socialcam’s angel investors: