The mobile industry will reel in more than $1.5 trillion in revenues in 2012, with 28 percent of that, $400 billion, attributable to mobile data, according to new research out from analyst Chetan Sharma.

He notes that within the revenues expected for mobile data, non-messaging revenues led by apps, mobile web browsing and streaming media have finally overtaken those of traditional messaging like SMS as smartphone usage continues to grow. Non-messaging, he says, will account for 53 percent of the total: in other words, some $212 billion will come from apps, music and video streaming, games and mobile web browsing.

Still voice is still accounting for a huge part of the value in mobile, and “OTT” services provided by third parties — be they Apple or others — are still only a small piece of the pie: 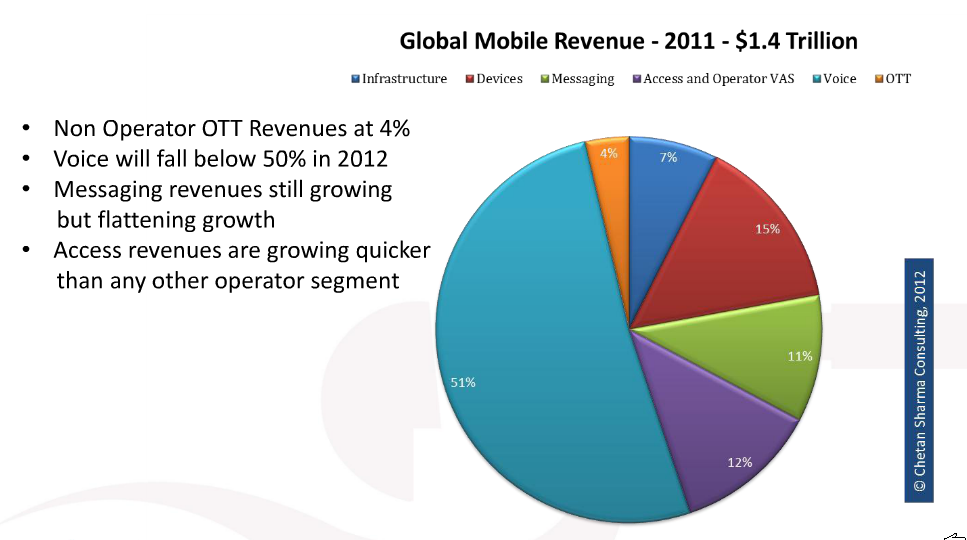 Sharma’s report also notes in the U.S. smartphones now account for 69 percent of all mobiles sold — the highest rate with the global average at about half that, 32 percent. He notes that some operators are even more bullish than that and expect 90-95 percent of all sales to be smartphones this year (O2 in the UK led that charge last year as you can see in the slides below). In the meantime, the adoption rate will lead the U.S. finally to be able to claim that more than half of all consumers will own smartphones. The U.S. is also, overall, accounting for about 40 percent of all smartphone sales worldwide.

The total worldwide base of mobile subscribers now stands at 6 billion, and while it took 20 years to reach the first billion, the speed at which this has accelerated is pretty remarkable: Sharma notes that it took only 15 months for that number to go from 5 billion to 6 billion.

As you would expect, a lot of the growth now is coming from developing countries but still the numbers are astounding. He notes that together China and India are adding 75 million new subscribers every quarter to the global base, and points out that China alone already has 1 billion mobile subscribers, the first country to reach that milestone, and that India currently has the highest subscriber growth rate.

But India may, at best, be an opportunity for the future rather than today. Sharma points out that India monthly ARPU is an “anemic” $2.50. “Even with a signficant subscriber base, there is going to be a general lack of opportunity in the market for the next couple of years relative to other markets,” he writes.

In contrast, the early adopters of Japan have helped that country remain in the lead for mobile data usage, with some 60 percent of ARPUs attributable to data. And because the U.S. has nearly the same proportion, but is significantly bigger, it is currently leading the world in terms of data revenues as well as overall ARPU revenues.

Still, the tide is turning: A number of emerging nations are now in top 10 mobile nations by subscribers, he says. They include Brazil, India, Russia, Indonesia, Pakistan, Mexico, while Korea, UK, Italy and Germany “have dropped off or slipped in rankings.” 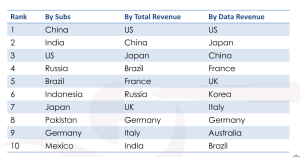 Patents. Although we’ve had a lot of noise about patent acquisitions, purchases and lawsuits around internet and (specifically) social media patents, Sharma points out the mobile continues to lead the field with patent applications, and that mobile companies are filing more in the U.S. than in Europe — on average 1.7 times more. He notes that in the U.S., the biggest patent holders are IBM, Microsoft and Nokia. In Europe they are Alcatel-Lucent, Nokia and Samsung. Nokia also appears in the list for top-three device patent holders, along with Samsung and Sony. And among carriers, AT&T, NTT Docomo and Sprint lead the charge.

That gives pause for thought about what Nokia has and what kind of value the company holds, beyond the cash that has been mentioned several times in the last week as ratings companies continue to downgrade the company.