Just watching TV without also using a tablet or smartphone at the same time seems to be on its way out. Earlier this month, Nielsen launched the first part of its report on primetime TV viewers in the U.S. and today, the analytics company is taking a deeper dive into the demographics of those who simultaneously watch TV and use their tablets. According to Nielsen, 45% of tablet owners watch TV and use their tablet together at least once a day. A whopping 69% say they do so at least several times a week and only 12% say they never do this.

Unsurprisingly, younger tablet users are more likely to use their tablet in form of the TV than older ones. The only activity where older users tend to use their tablets more is checking email. Overall, checking email is also the most popular activity for tablet owners while watching TV (61%), followed by visiting social networking sites (47%) and looking up information about TV programs.

Here are a few other findings from Nielsen’s report: 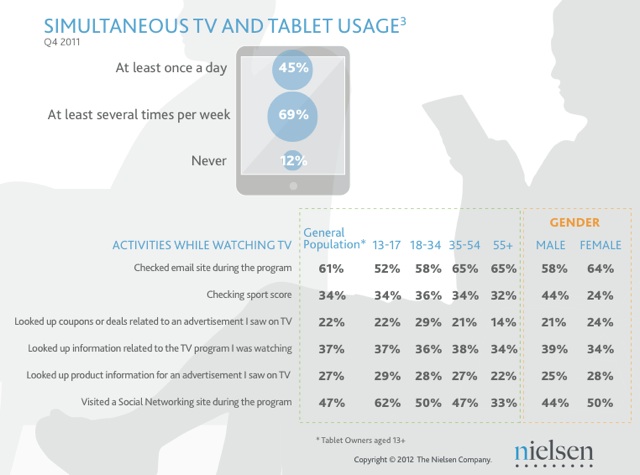