“We must do whatever we can to stop cold calling each other’s employees and other competitive recruiting efforts between the companies.” This quote from Steve Jobs to Palm’s CEO was central to a San Jose court ruling today for why a class-action antitrust lawsuit against Apple, Google, Intel, Adobe, Intuit, Pixar, and Lucasfilm won’t be dismissed and will move on towards a June 2013 trial.

Now lawyers representing five former employees of the tech companies will begin document discovery in hopes of surfacing more damning evidence. While we mean no disrespect to Steve Jobs, his actions could force Apple and these other companies to pay out hundreds of millions of dollars to Silicon Valley employees in a settlement or damages ruling. Check out the full court ruling and our analysis below.

The tech giants put up a flimsy defense at a January court hearing, attempting to secure a motion to dismiss on the grounds that “no poach” agreements between them were isolated and not a conspiracy to keep employee salaries down. But Judge Lucy Koh disagreed, noting there was enough evidence to support the conspiracy charge for her to issue a failure to dismiss ruling.

Back in January, I broke the news when exciting evidence from the Department of Justice’s 2010 antitrust investigation against the seven companies was unsealed. The evidence showed that Steve Jobs and Google’s Eric Schmidt brokered deals with their competitors to not try to steal each other’s employees — peace treaties that prevented bidding wars that could lead these employees to be paid more. Digging through the evidence, I saw strong indicators that a conspiracy between these companies was unfairly keeping engineers from being paid their full market value, and predicted the motion to dismiss would be denied.

A week later I blogged the motion’s hearing from the courtroom, publishing as soon as Judge Koh concluded “This case is moving forward…this case is going to survive the motion to dismiss.” Today Judge Koh formalized those sentiments into an official ruling, as reported by Reuters.

The defendants cited Kendall precedent, where an antitrust case was dismissed because plaintiffs didn’t have evidence showing the “who, what, where, and when” of an alleged conspiracy. However, Judge Koh ruled that the Kendall case was distinguishable from this no-poach antitrust case because here the plaintiffs detail the “actors, effect, victims, location, and timing of the six bilateral agreements between Defendants” to not cold call recruit each other’s employees.

Specifically, the DOJ investigation evidence revealed emails between”senior executives” of these companies arranging no-poach agreements. It also showed the six supposedly isolated agreements were identical, including the “do not cold call” deals between Apple and Adobe in May 2005 and between Pixar and Lucasfilm in January 2005. These deals were shown to have the potential to reduce employee salaries, which is unlawful. 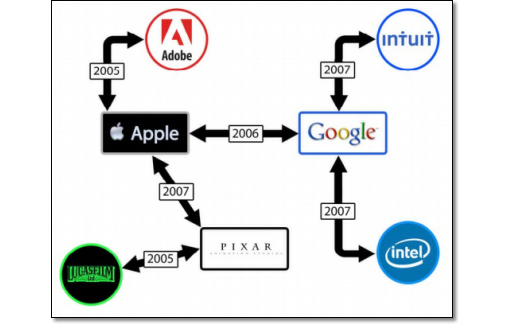 The defendants also tried to claim there was no “meeting of the minds” between the heads of these companies. However, at the time, Steve Jobs was CEO and sat on the board of Pixar, Google CEO Eric Schmidt was on the board of Apple, and Arthur Levinson sat on the boards of both Google and Apple, providing ample opportunity for conspiracy. Judge Koh wrote that “At least one of [these] three individuals had significant influence over at least one party to each of the six bilateral agreements…It is plausible to infer that the overlapping board membership here provided an opportunity to conspire.”

Judge Koh goes on to explain why a conspiracy is “plausible” and therefore the plaintiffs should be given an opportunity to discover more evidence. She also strikes down the defense that since only six agreements took place between the 21 possible pairings of the 7 defendants, employees of one company wouldn’t be injured by agreements between two others.  While not proven yet “it is plausible to infer that even a single bilateral agreement would have the ripple effect of depressing the mobility and compensation of employees of companies that are not direct parties to the agreement” due to negotiations exposing compensation benchmarks, so she refused to dismiss the case.

With the motion to dismiss denied, here’s what happens next. The court will convene on June 28th to hear class certification that will determine which employees are eligible to be represented by the class action lawsuit. That could be all of the defendants’ employees, software engineers and scientists, or just software engineers.

Then the case is set for trial in July 2012. If compensation was suppressed between 5% and 10%, as the plaintiffs lawyer Joseph Saveri estimated, each entry-level software engineer eligible for the class action suit could be entitled to $5,000 to $10,000 for each year they were employed between 2006 and 2009, and more senior employee could be entitled to much, much more.

Here is the full court ruling of the denial of the defendants’ motion to dismiss: