Smoopa, a mobile commerce startup co-founded by a longtime ex-Googler, a defense scientist and a former Massachusetts state trooper (yes!), is landing on iOS today with a price-scanning app that pays shoppers to find bargains.

The app capitalizes on a trend that has started to roil brick-and-mortar stores over the last year. Armed with smartphones, consumers are comparing prices in physical stores to ones online in a hunt for the best deals.

While there are already apps like this out on the market (most notably from Amazon and eBay with the Red Laser app they acquired), Smoopa’s spin on this is that they reward shoppers for sharing price information back from real-world stores. Every time a consumer scans an item and enters in price data from a physical store, there’s a random chance they’ll be rewarded with credits that can either be put towards gift cards, rebate checks or charitable donations.

“We’re at an inflection point with local shopping and there’s an opportunity to change the landscape that hasn’t existed before,” said Smoopa co-founder Mendel Chuang, who worked on AdSense after joining Google in 2004. He co-founded the company with a former defense scientist Charlie Sharp.

And here’s the super cute part of the story (which hopefully I’ll get to writing a post about later), the iOS app was actually built by Chuang’s husband, Derek Langton. He was a Massachusetts state trooper for 18 years who has picked up coding over the last year and a half.

“He’s been mad-driven,” Chuang said of his 42-year-old husband. “The more I told him that iOS development was hard, the more he wanted to prove me wrong.”

Langton added, “[Chuang] now admits the iOS app is even a little better than the Android one.” Smoopa went Android-first in an unusual decision. Chuang thought Android shoppers were probably more price-sensitive than iPhone owners. That app has gotten more than 100,000 downloads on Google Play already. 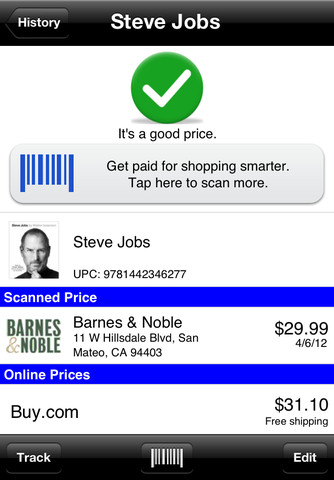 In the app, a consumer scans a barcode, then the app displays a list of matching products from the company’s 20 million item database. It also shows a list of nearby stores. The user picks one and gives the local price in the store on the item. They might be presented with a special offer or a randomly generated reward of around 50 cents in credit toward a future purchase. If they find a better price online through the app, they can buy the item directly through app. Smoopa factors in shipping costs too, so a buyer can tell whether the overall price will be better offline or online.

Smoopa earns affiliate revenue when consumers buy items through the app. They can also earn revenue through targeted advertising (which in this case is especially valuable because the app is so close to a person’s point of transaction).

There are little viral hooks built into the app, like a $2 referral bonus for every friend a user adds.

The company, which has raised a little over a half-million dollars in angel funding, is based out of AOL’s incubator space, First Floor Labs, in Palo Alto. They’ve taken funding from Dennis Hwang, the original Google doodler, SimplyHired co-founder and chief technology officer, Peter Weck and Nate Johnson, who leads consumer product marketing at LinkedIn.