PowerInbox, the email platform that lets you run apps for Facebook, Twitter, Groupon and Google+ inside your inbox, is today launching its new “Connect API” which allows its service to be directly integrated into third-party mail clients without requiring users to install the PowerInbox software.

To kick off the launch, PowerInbox has partnered with a few lesser-known email brands (sorry, no Gmail), including UnifiedInbox, SMAK, and Fuser. In addition, the service has expanded its lineup of email apps to now include Instagram, Pivotal Tracker, and a Boston-based restaurant called Boloco.

For those unfamiliar with PowerInbox, the startup is building an email platform that, until now, worked via a web browser extension. Once installed, the emails sent to you from third-party services were turned into mini-apps that let you do things like comment on a Facebook post, send a tweet, follow a user, add someone to a Google+ circle, see the status of a Groupon deal, and more. The idea is that instead of clicking the links in the email to respond to whatever the company sent, you could quickly interact with the service in question without ever leaving your inbox.

However, raising awareness about PowerInbox and the hassle of having to install a browser add-on, could have limited PowerInbox’s adoption. That’s why the introduction of the Connect API today is so critical to the company’s future growth. Now, email providers can implement PowerInbox on their end, making it available to all their users at once.

CEO Matt Thazhmon tells us that the Connect API is but one step the company has been working on to create this new market for email apps. Going forward, PowerInbox will also be working to integrate with ESPs like MailChimp, email marketing agencies and businesses to send out more interactive emails. They will also work with developers to build apps for the platform and help promote those apps to consumers.

Currently, PowerInbox supports Facebook, Twitter, Google+, Groupon, and now Instagram, PivotalTracker and Boloco. With Instagram, you’ll be able to see comments in your emails and then comment back, plus like photos and see tag and location information about them. For Pivotal Tracker emails, a service popular with developers, you’ll see story details and all the comments inside the notification emails, see subtasks, and accept and decline stories right inside the emails. 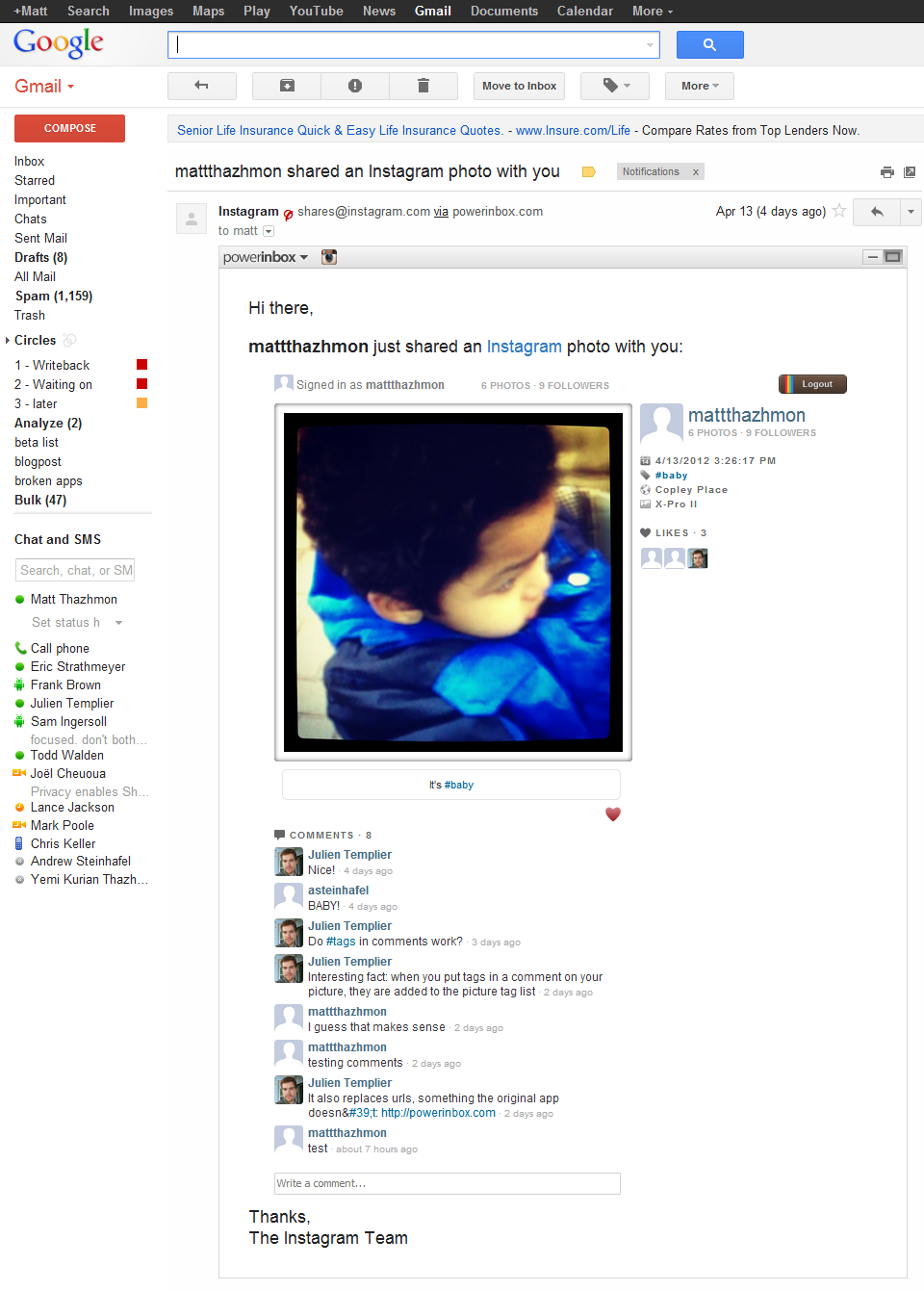 Boloco is a bit of an odd one – it’s a burrito company  – which makes it the first business to sign up for PowerInbox. The restaurant is active in social media and wanted to make their customer emails more interactive. Thazhmon says they got the business up-and-running on PowerInbox in about an hour.

PowerInbox is now working on integrating other popular services next, including Pinterest, Netflix, Amazon, Southwest, Turntable.fm and more. And they’re reaching out to other email client makers, to hopefully integrate their new Connect API into those services, too.

Thazhmon says he knows there are challenges ahead for PowerInbox, given its goal of creating a market for email apps. “The email app market today is similar to the mobile phone app market from seven years ago (basically non-existent). Five years from now, email apps will be at the same level as mobile and social,” he says. “But it’s a long journey ahead to create that ecosystem of senders and email clients and killer apps and thought leaders and so on. It’s not a technical problem. Market creation is a very, very hard nut to crack.”

Boston-based PowerInbox has $1.9 million in funding, with both VC and angel backers.