Keeping your calendars, contacts and tasks in sync between all of your devices is still a bit of a hassle – especially if you use different operating systems and vendors. Germany-based Fruux, which was founded in 2010, offers a simple and elegant solution for keeping your contacts and calendars in sync between all of your phones, tablets, laptops and desktops. Sure, you could use iCloud or Google’s services to sync your data between your devices, but that locks you in to one vendor and once you throw in apps and operating systems from different companies, things can get complicated fast. Fruux aims to simplify this process by offering a unified syncing service based on open protocols and the CardDAV and CalDAV standards.

Thanks to using these standards, new users don’t have to install any new apps on their devices. To get started with Fruux, you simply register for the service and start setting up your devices. Fruux offers step-by-step walk-throughs for iOS, OS X, Android, Nokia N9, Thunderbird and Evolution. 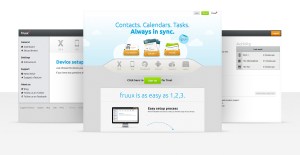 The company also offers a basic web service to manage your devices, but you can’t currently manage your calendars or contacts there. Fruux uses Amazon’s web services to host its data and uses standard security procedures to protect its users’ information.

As the company’s co-founder and CEO Dominik Tobschall told us earlier this week, the idea behind the service is to “liberate the user’s data from specific vendors and device and make it unified.”

For the near future, the company plans to improve the web component of its service and focus on making its tools easier to use for teams. Indeed, Tobschall told us, quite a few companies have already asked for these features and some small teams are already using the service, despite the fact that the current version wasn’t really designed for this use case.

With more and more businesses moving toward a “bring your own device” policy, offering an affordable and standards-based approach that isn’t tied to a specific vendor does indeed sounds like a good idea. To fund the development of these new features, Fruux has also been working on getting more funding for its product. Just last month, Fruux secured its first round of venture funding, with two of Germany’s leading funds – High-Tech Gruenderfond and netSTART Ventures – investing in the company. The terms of the investment were not disclosed.