A big domestic market of 92 million people, English as an official language, a large IT talent pool, and a strategic location in South East Asia: the Philippines surely has the potential to become the next web powerhouse coming out of Asia. I traveled to the country last month (on a private trip) to realize that the startup scene is still in its infancy – but that’s poised to change very soon.

One pioneering startup from the Philippines is Twitmusic, a Twitter-based social music service aimed at artists and their fans. As an artist, having an account on Twitter is one thing, but Twitmusic allows them to upload and share songs (and other content) through Twitter in a matter of minutes. 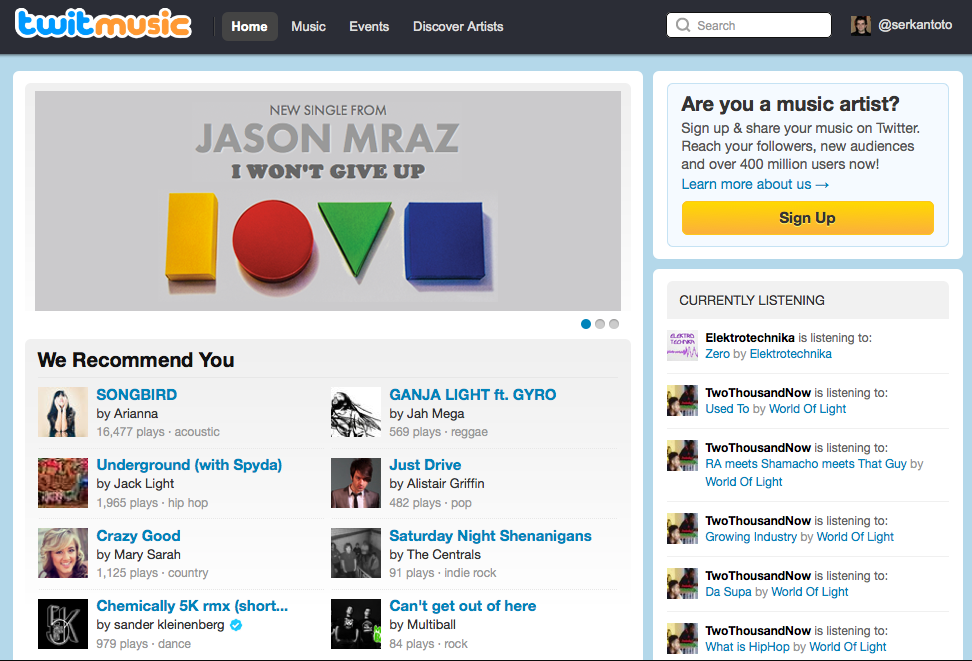 The obvious idea here is to provide artists with a more efficient viral promotion and distribution channel to reach, engage with and sell music to fans – seamlessly integrated with Twitter. Users can listen to songs for free on Twitmusic, discover new tracks or artists, and share content with followers without having to register for a new site.

And Twitmusic’s concept seems to work: MC Hammer is actively using the service (here is his Twitmusic profile page), as are Bryan Adams, Bow Wow, Jon Secada, Jason Mraz, and over 4,000 other artists currently. Adams even chose to release his latest single exclusively on Twitmusic.

Here’s how a dedicated page for a song (in this case Jason Mraz’s “I won’t give up”) looks:

With the initial traction, the eponymous Manila-based startup behind the service has seen interest from investors around Asia, but co-founder Stefano Fazzini told TechCrunch exclusively that the core team has moved to the US a few days ago.

As the first company from the Philippines, Twitmusic was accepted into 500 Startups, the Silicon Valley-based accelerator and capital fund (which just raised another US$50 million). Twitmusic has become part of 500 Startups’ 4th batch just ten days before the program started (on April 2), with Fazzini saying the demo day will be held around the end of July. (His brother and fellow co-founder Christian Fazzini now also resides in the US.)

This should be encouraging news for many startups in Asia with a global focus, especially seeing how young the service is: Twitmusic was launched in October 2011 (AngelList entry).

For more information about Twitmusic, hit this link for a recent, in-depth interview with Fazzini and Twitmusic marketing director Sandra Seifert. The Huffington Post UK covered Twitmusic in February.