The appeal of social music platform Turntable.fm has been its synchronous music listening in public dance rooms. Anyone can become the MC, playing the tunes and playlists of their choice, just as each listener can choose their own avatar, or chat with other music junkies in realtime. And now tech and startup geeks have a new feature to get excited about: Turntable quietly announced via blog post today that users can add stickers from their startup of choice to their laptops while dropping those mad ill beats.

That’s right. For those unfamiliar, when Turntable.fm users choose to DJ in a particular room, their avatar is set up at the DJ station at the front of the room behind a laptop. Previously, those laptops were vacant beyond an Apple logo. But now, simply by going to “Settings,” and clicking on “Laptop stickers,” users can now add stickers to their laptops while they play.

Users can add 20 stickers from a slew of startups, and arrange them as they please on the back of their laptops. 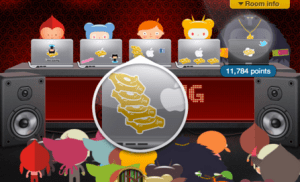 The stickers will also show up on listener profiles, and users can mouse over the stickers for a zoom function to take a closer look, according to Turntable’s blog post.

It looks like the feature isn’t fully live yet for public consumption, but you can check out the sticker launch party landing page here. There are only 11 startup logos to choose from at this point, but we’re hoping it’s not too long before TechCrunch’s logo shows up, as well your startup of choice.

There are still a few bugs in the new sticker feature, but the startup is working those out. Check out their Twitter stream for updates.

We’ll update as we learn more.