Spotify wants to make it easier for anyone to legally soundtrack their websites, oh, and get links to its own download page plastered all over the Internet. So today it launches the embeddable Spotify Play Button for news sites that when clicked starts playing a designated song, album, or playlist in your Spotify desktop app. Rolling Stone, The Huffington Post, and the Guardian are amongst the marquee launch partners that will start featuring the button today, and Tumblr bloggers can instantly add Spotify music to their posts straight from the audio dashboard.

While Spotify tells me this is all about improving music discovery and the listening experience, the real benefit for it comes when someone without its desktop app clicks the button — they’re prompted to download Spotify (shown below). The company’s user acquisition costs are supposedly sky high, so free promotion through the Play Button could be key to making its business model hum.

The Spotify Play Button solves a big problem for publishers looking to stream music from their websites. Normally they’d have to embed a YouTube video with often crappy audio quality, host a questionably legal MP3, hotlink to another blog’s file that could get taken down, or dig around on sites like SoundCloud for a legal streaming version. Spotify’s Play Button gives them a quick, stable, reliable, high-quality, and legal way to soundtrack their site and make sure artists get paid for their work.

To configure the Play Button, publishers can right-click any song, album, or playlist in Spotify, copy its special Spotify URI, and paste it into https://embed.spotify.com/. Then they copy the embed code for a compact button or one that shows album artwork, and paste that into their website’s code. Music can even go viral as other publishers can grab a widget’s embed code by hovering over a Play Button.

Other sites you can check it out on include ShareMyPlaylists.com, FanRx, Popdust, The Independent, Time Out Group (New York City, Paris, London), NME, Mashable, FanBridge, Wonderwall, The Fader, Chegg, ELLE , Noisey.com, Entertainment Weekly, People.com, and SPIN.com. The color and size of the button can be customized by messing with the code, and Spotify says more options will eventually be added to the configurator.

Tumblr users have it even easier. The post composer’s audio dashboard now lets you search for Spotify content, and with a click an optimized player is inserted into your post — no embed code necessary. The Play Button makes it easier for heavy Spotify users too. Instead of having to pause your current Spotify jam before clicking some other music stream on a website to avoid having two songs playing, Spotify will automatically override what’s already playing on your app. 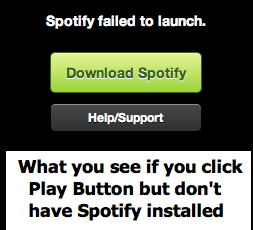 Spotify has clearly taken a lesson from the march of Facebook’s Like Button across the web. Not only will the Play Button increase engagement and retention of existing users, and drive signups from new users, it will help make Spotify a household name. AppData shows Spotify as having 17.7 million monthly users, and 7.1 million daily users, and some peg its U.S. subscriber count around 3 million, though Spotify denies this as a lowball. In any case, it needs more subscribers and ad listeners to pay for the high initial and licensing fees the record labels demand for their content.

The question now will be whether serious music bloggers will be willing to show Spotify Play Buttons instead of their old streaming sources even though they might exclude some readers who don’t want to download the app. Otherwise the unfamiliar Play Button could end up playing second fiddle to YouTube and SoundCloud streams.