Fragmentation isn’t just a problem reserved for mobile operating systems, it’s inherent to our online identities as well. Our digital identities exist in a loose and fragmented consortium of usernames, email addresses, scree names, social media accounts, passwords, and sitekeys. Many have tried to capture the single sign-on holy grail, and most have failed, because as much as we are inconvenienced by fragmentation, no one wants to hand over their personal information to one entity.

Last month, we covered the beta launch of OneID, a San Jose-based startup founded by Steve Kirsch, a serial entrepreneur, Silicon Valley veteran, and one of the co-inventors of the optical mouse. With OneID, Kirsch is looking to topple the current username/password digital identity paradigm and replace it with a system that uses public key cryptography to assert users’ identities across PCs, smartphones, tablets, and more.

There are already a number of services which attempt to handle the single sign-on problem, and while OneID wants to eliminate passwords from memory, oftentimes these identity plays just end up in offering one more competing standard, rather than achieving the opposite. (See Randall Munroe’s humorous take.) If the service can offer real value to the end user, and reach the kind of scale required to make a difference, there’s hope — but that’s a tall order.

Kirsch says that OneID’s value prop is that it operates like a secure Facebook Connect, keeping payment and address info secure by encrypting it in its distributed architecture, which is only then readable by your particular mobile device. As with single sign-on plays, the goal is to reduce friction and fraud inherent to authentication (and security) that is part of every digital financial transaction. That, and on the consumer side, it comes with the benefit of speeding up the sign in and check out process by way of single-click purchases — like Amazon one-click without the login.

While it’s a big infrastructure play and a tall order, OneID has some help. Kirsch developed OneID’s technology with veteran engineers Jim Fenton, Adam Back, and Bobby Beckmann, and today the startup is bringing on veteran security executive Alex Doll as CEO. Before coming to OneID, Doll was most recently an executive-in-residence at Khosla Ventures, where he was working on new approaches to the digital identity problem. Before Koshla, Doll was a founding executive at PGP Corp, the makers of public-key cryptography tech, which he led from zero to its integration with Symantec’s anti-virus technology. As a result of Doll’s appointment, founder Steve Kirsch will become acting CTO.

OneID’s new leadership, coupled with this significant infusion of capital, should be a serious leg-up as the company expands. As mentioned, for OneID to work, it’s going to need a significant user base, because there isn’t a whole lot of value for other sites in adding this tech, even if it’s something consumers are dying for. According to Kirsch, OneID is currently live on over 1,000 sites (that reach over 100 million users), and we can expect that the new leadership to focus on adding zeroes to that number.

Stay tuned. For more on OneID, check out the company at home here. 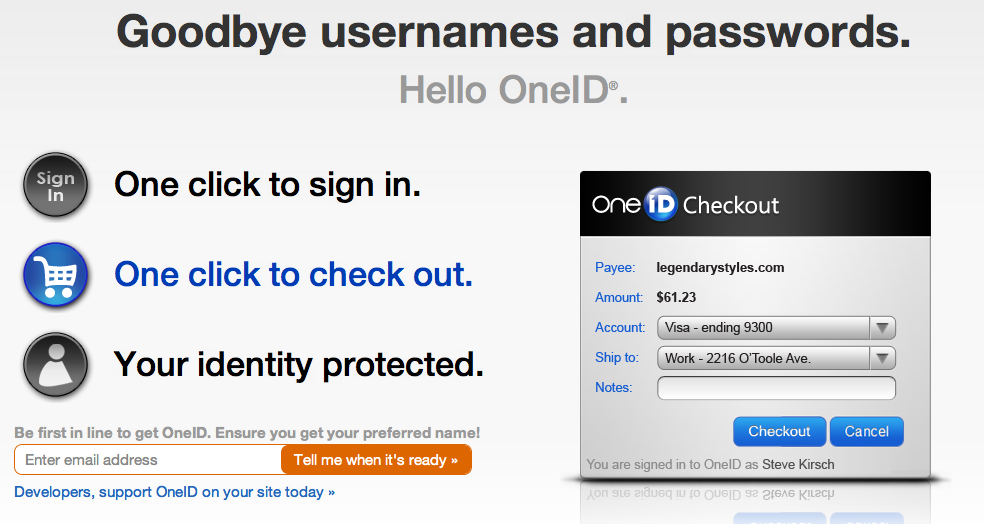