Remember last month, when StatCounter noticed that Chrome surged to briefly (for one day only!) become the world’s most popular web browser? Well, another key finding in its report had to do with the time of day Chrome usage peaked – according to StatCounter, Chrome seemed to be used more on weekends. The implication, of course, was that people were forced to use Internet Explorer at work, and used Chrome when they had the freedom to choose.

Today, new data has emerged to dispute StatCounter’s specific claim of Chrome’s jumps in weekend usage, but that backs up the overall claim that Chrome is the people’s choice when outside of work.

Of course, Microsoft took issue with StatCounter’s earlier claims, delving deep into the methodology of various services providing insight into browser share. As many of you know, StatCounter’s methodology can skew the data a bit. For example, StatCounter doesn’t adjust for pre-rendering (loading pages in the background which the user never sees and may never even click on), nor does it “geoweight” the data to paint a more accurate picture of worldwide usage.

Instead, with StatCounter, it’s all raw data. Microsoft said that if browser share had been weighted appropriately, it wouldn’t have been such a close race – IE would be at a 45% share for the month, not 35%, compared with Chrome’s 24% share, not 30%.

While it’s important to note the discrepancies in how share is measured, Microsoft failed to note that no matter how you slice the pie, IE’s share has been steadily dropping over the years.

(I believe they also said wah, wah, wah, but decided to edit that part out before posting).

Well, today, there comes a bit more data to throw into the mix from search-targeted ad network Chitika’s network, which took a sample from its network of hundreds of millions of unique impressions across the U.S. and Canada. Specifically, the firm was interested in whether or not, as StatCounter had claimed, Chrome was a popular weekend browser.

As it turns out, in Chitika’s view, the answer was no.

To be clear, this data set looks only at two North American markets, making it less of an apples-to-apples comparison with StatCounter, which based its data on 15 billion page views (4 billion in the U.S.). 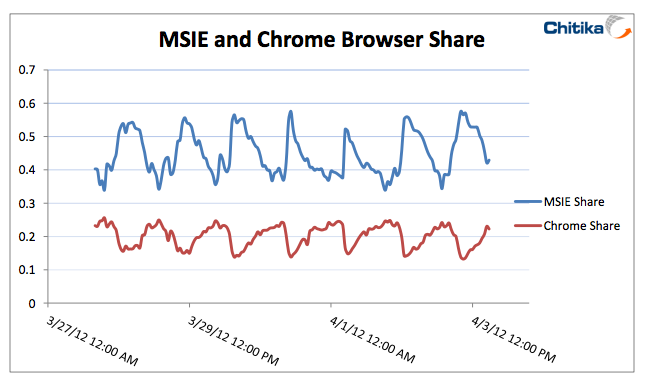 Still, some interesting findings, whether or not you fully buy into whether Chitika sees things all that accurately. For starters, the firm could not prove that Chrome’s popularity spiked on weekends. But it did discover that IE saw peak use from the beginning of the day (EST) towards the lunch hour and early afternoon, when its share of browsing would sit above 50%. Chrome, meanwhile saw pickup in the late afternoon, maxing out in evenings, often peaking above 20% at these times.

Chrome’s peak use was 24.6% throughout the week to IE’s average peak use of 55.3%. And no, Chrome never – even briefly – topped IE in terms of overall share.

While Chitika couldn’t back up StatCounter’s findings specifically, its differently sourced data does back up an overall emerging trend here: IE is still the browser often used at work, while Chrome is popular when you clock out. Tear apart the methodology if you will, but now that’s multiple sources showing that IE’s dominance still seems to come from business use, not choice.