It’s hard to say how popular Chrome OS, Google’s browser-centric operating system, really is. There can be little doubt, though, that Google is quite serious about this initiative. Today, Google launched the latest developer version of Chrome OS and this update sports the first major redesign of the operation system’s interface since its launch in late 2010.

In this new version, Chrome OS almost looks like a traditional OS, with a full-blown desktop and window manager instead of just a browser and tabs. Aura, as this hardware-accelerated window manager is known, is Chrome’s next generation user interface framework and it is making its public debut in this new developer version of Chrome OS. 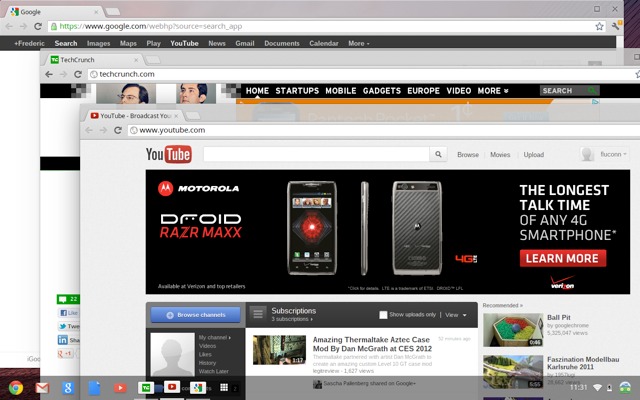 This update is quite a departure from Chrome OS’s origins. Until now, Chrome OS basically just gave users access to a single browser window at a time (you could already have multiple browser windows open on separate virtual screens) and launching new apps meant you first had to open a new tab and then look for the app you wanted to start. Now, Chrome OS features a Launchpad-like app launcher, as well as a Windows-like taskbar (Google calls it a “shelf”). Apps, it is worth noting, still start in a browser tab and not as stand-alone windows, though.

In short, Chrome OS now looks and behaves a lot more like the desktop operating systems it set out to challenge.

In a way, this almost feels as if Google is admitting defeat here. When Chrome OS launched, Google’s Sergey Brin argued that traditional PC operating systems were “torturing users.” Chrome OS was supposed to be all about “speed, simplicity and security” and Google wanted to use it to “re-think what operating systems should be.” This new version, however, does away with a bit of this simplicity in favor of greater functionality. That’s not necessarily a bad thing, though, and may just help Chrome OS gain more mainstream acceptance as new users will surely find it to be a more familiar experience.

While Aura is obviously the star of this update, it’s worth noting that the latest version also introduces support for files compressed in the .tar, .gz and .bzip2 formats, as well as better support for multi-monitor setups.