Yep, I’m writing another post on the Lumia 900. It’ll be my fourth in the span of 24 hours, but there’s just so much to talk about.

So after receiving a fly and a die, getting checked out by our camera crew, and being weighed by yours truly, we’re putting the Lumia 900 up against baby brother Lumia 800 and the titan of smartphones: the iPhone 4S.

Which will come out victorious? Well, that all depends on what you need and want, so let’s not beat around the bush any longer.

If you’re new to the world of smartphones, the Lumia 900 was built specifically for you. Sure, I’d prefer a smaller display to go along with that resolution (480×800), and the specs themselves are what you’d find on a phone from last year, but I can promise you that performance is a dream on this bad boy.

Plus, Windows Phone brings a welcome option to those of us who are sick of Android and iOS. Oh, and did I mention that you can nab this phone for $100 on-contract from AT&T, complete with 4G LTE connectivity? Nokia and Microsoft have managed to strike an astounding balance between performance and price with the 900.

But perhaps you prefer a smaller display. The Lumia 800 has everything that the 900 has save for a 4G radio, however, the Lumia 800 display measures in at 3.7-inches as opposed to the 4.3-inch Lumia 900. The only catch is that you’ll have to pick up the Lumia 800 at a Microsoft store as a part of a ridiculously pricey bundle.

For $899, you’ll get an unlocked handset, along with a Nokia Play 360 Bluetooth speaker, Nokia Purity HD headphones and a Luna Bluetooth headset. If you actually want all that stuff, the value proposition isn’t so bad, but otherwise I’d say to pass.

Then, of course, there’s the iPhone 4S. What can be said other than that it’s an exceptional device? But, there are plenty of us who are ready for a change in the OS department, and the iPhone 5 will be out in a few months anyways. That will significantly downgrade the iPhone 4S’s cool point status. Past that, the most basic iPhone 4S costs double what the 900 does — prices start at $199 for the 16GB model.

Obviously, the decision is yours, dear readers. But I depart with one final request: please just consider Windows Phone. You don’t have to buy it — hell, you don’t even have to like it — but giving it a chance in your mind will allow for the emergence of a third mobile ecosystem. And as competition grows, our phones will only get better and better. 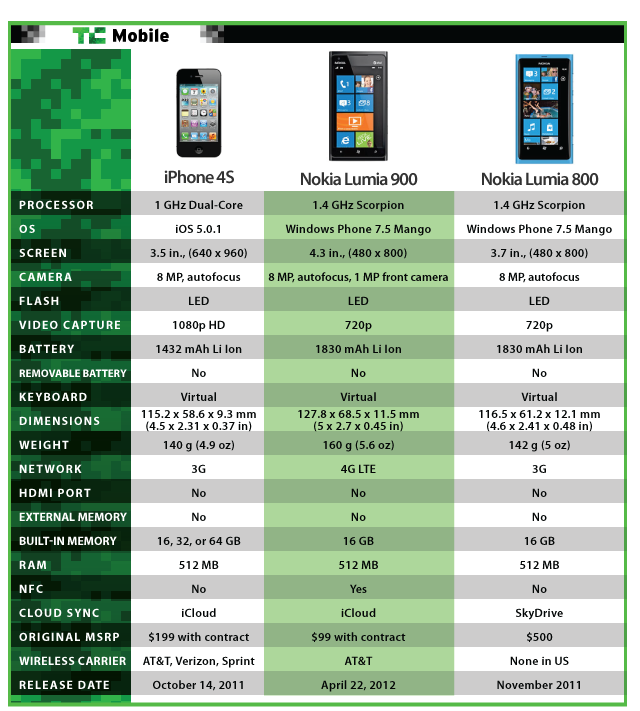 Check out all of our Lumia 900 review posts here.