If you were to make a list of the business models most popular among tech startups today, a snail mail-based subscription service probably wouldn’t be at the top of the list. On that level, the Los Angeles-based Quarterly is somewhat of an outlier, having created a design-oriented subscription service and accompanying web platform, which allows anyone to sign up and receive receive curated, physical gifts from influential contributors like President of the Rhode Island School of Design, John Maeda, Behance Founder Scott Belsky, and Alexis Ohanian of Reddit, Breadpig, and Hipmunk fame — by mail.

Tapping into the piping hot collaborative consumption movement, with notable designers and tech entrepreneurs contributing original products, it appears that Quarterly’s quirky cause has not gone unnoticed among investors. Today, we’ve uncovered a SEC Form D filing, which shows the startup recently closed a $1.25 million round of Series A financing, led by Tony Conrad and True Ventures as well as Craig Shapiro’s Collaborative Fund.

We first covered Quarterly back in December, when it launched its subscription service into the wild. At the time, founder Zach Frechette (formerly Editor-in-Chief of GOOD Magazine) told us that Quarterly sprung out of our increasing reliance on digital technologies to interact and communicate with each other.

With digital blinders on, people forget the pleasure of tangible, more traditional interaction and sharing, so Quarterly wanted to bring the tastemakers of digital technology and social networks into the real world to facilitate an old school connection between influencers and the people who “follow” them. And, because it’s essentially a universal truth that people love to receive cool stuff in the mail from people they love, or are inspired by, Quarterly naturally chose the United States Postal Service as its distribution service.

Having worked in media, Frechette draws an analogy to magazines, explaining that, instead of subscribing to receive words on a page, Quarterly users pay $25 every three months to receive packages that “tell a compelling story crafted and narrated by the contributor.” What kind of “packages” do subscribers actually receive? It depends, but they are meant to help you better understand or connect with them, as well as to support the “process of creatives,” so if the contributor is a novelist, a user might receive the same kind of notebook they used to plot their bestseller.

With revenue models still in development, the startup raised a round of seed funding pre-launch to help it get off the ground. Investors included Craig Shapiro, Behance Co-founder and Pinterest early investor Scott Belsky, CEO of Sugar Inc. Brian Sugar, and Co-Head of IDEO NY, Ryan Jacoby, among others.

Quarterly isn’t giving any details at this point on its Series A raise, so it’s not clear what other firms, if any, participated in the raise beyond the follow-on contributions of Collaborative Fund and first-time investor, True Ventures.

The team is also being tight-lipped about its progress since launch, but at the time, it was adding a new subscription every 5 minutes. Quarterly’s website does give some indication, however, saying that “due to high demand,” it has temporarily closed the service to new subscribers. The website also seems to make mention of some new contributors on deck, so we’ll update when we learn more.

Readers can check out Quarterly at home here. 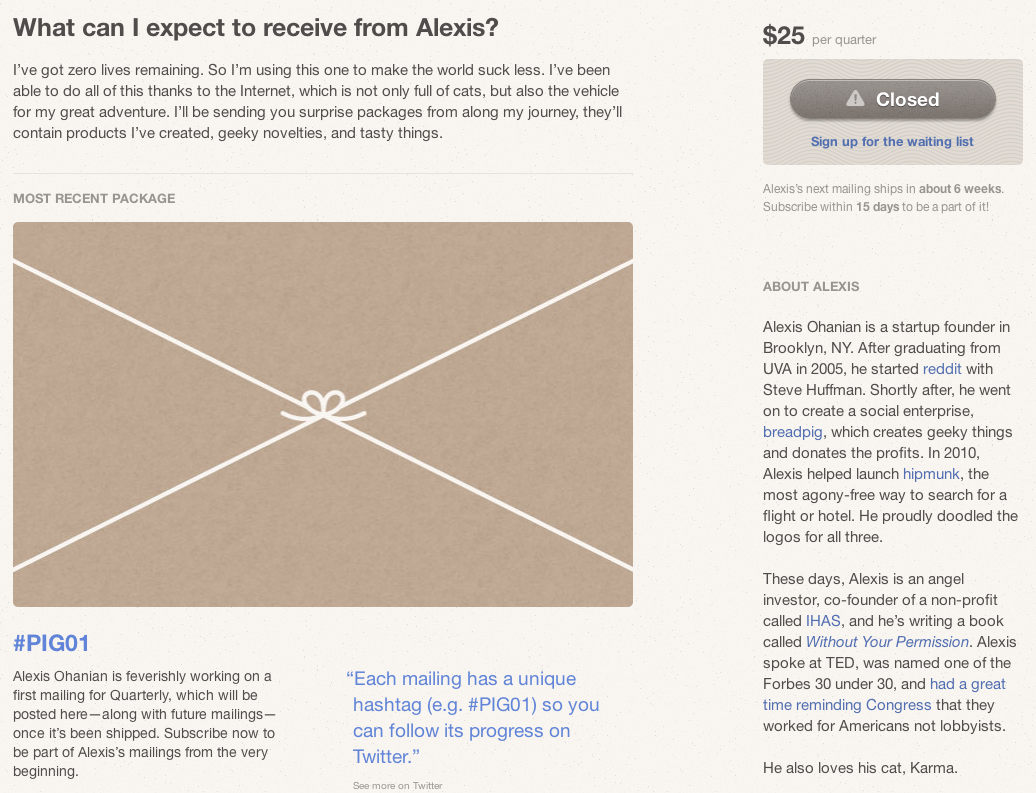