It will be virtually impossible to succeed in the new reimbursement model without recognizing what has long been said, but little done about it — “the most important member of the care team is the patient.”

Having implemented or reviewed over 100 health IT systems, there is one common purpose at the core of the architecture of these systems — how to get as big a bill out as quickly as possible. That has been an entirely rational response to the flawed reimbursement model at the heart of healthcare’s hyperinflation (here’s a not-so-fun fact: Since the ’60s, while all non-healthcare expenditures increased 8x, healthcare increased 274x).

While there is much uncertainty about the future of healthcare, there is one certainty: healthcare will be paid based on some blend of value/quality/outcome and a shifting away from the “do more, bill more” reimbursement model. It’s hard to overstate the scale of this change and what it means for healthcare providers and the organizations that support them. This will make the shift from analog to digital media look trivial. One similarity to the analog-to-digital media shift, however, is healthcare will also face deflationary economics that will produce many winners and losers. It is also changing what has long been been said – healthcare is where tech startups go to die. Instead, there are exciting new opportunities exploding all around the healthcare continuum. 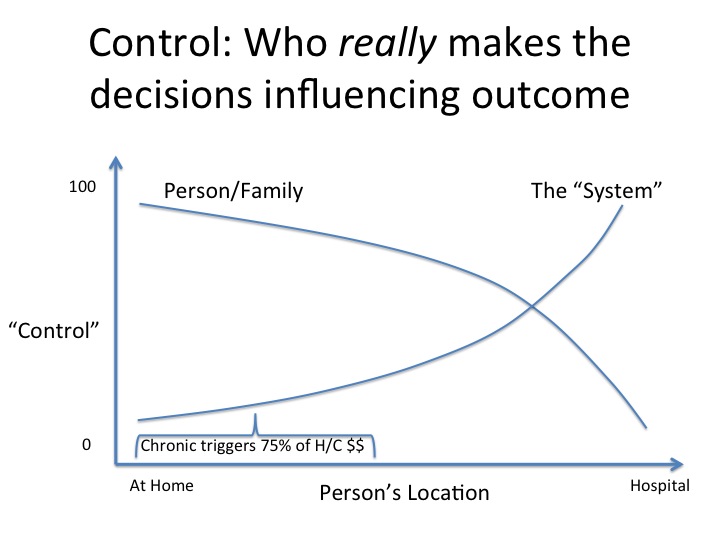 Who is in control of decisions driving outcomes. Adapted from the Nuka System of Care.

The chart above speaks to the importance of the individual (or family member) in the care process. There are two curves. One is the degree to which the healthcare system is in control while the other is the degree to which the individual (aka patient) is in control. Clearly, when an individual is in a hospital — perhaps unconscious after an accident or during surgery — the healthcare system is in control (appropriately so) of the decisions that drive the outcome. In contrast, the situation is different when one is managing a chronic condition which represents roughly three-quarters of all healthcare spending. In those situations, it is the patient who is control. They decide whether they’ll fill prescriptions, take the pills, change exercise or diet habits and so on. Their actions will be the determinant of the outcome.

Top health systems perform extraordinarily well when there is the medical equivalent of a big fire. However, it is individuals who are the key player in keeping small fires from growing bigger and fire prevention. Just speaking to the technology side of the equation, health systems have invested massive sums of money to fight the big “fires” that take place in hospitals. The opportunity for healthtech startups today is to develop the equivalent of CO2 alarms, fire extinguishers, keeping fires from reigniting, fire inspections, and better communication systems that snuff out small “fires” or prevent them from happening all together.

While single digit savings translate into big money in healthcare, there are a few organizations who have had double-digit cost reductions and outcome improvements. In earlier pieces, I have highlighted two organizations that have had impressive results by developing new care models.

There are two others that have particularly demonstrated the importance of individuals and behavioral science. Their leaders are continually looking for ways to improve. As word spreads about their accomplishments, others are seeking to replicate their success.

Iora Health’s Rushika Fernandopulle was highlighted in Atul Gawande’s famous “Hot Spotters” piece from the New Yorker. The graphic below demonstrates their results. Iora Health is one of the pioneers in the Direct Primary Care Medical Home movement  and received $6.3M of funding recently. 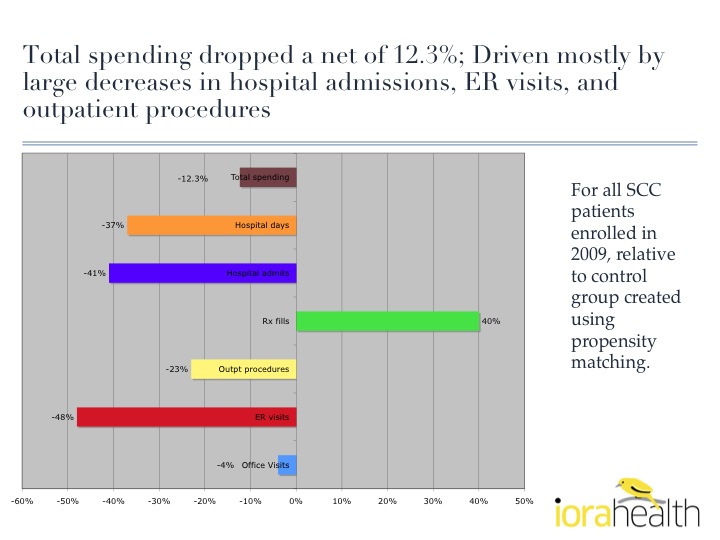 The SouthCentral Foundation in Alaska has demonstrated that it is possible to turn around a government-funded health system (Indian Health Service, Medicare & Medicaid provide 95% of their funds). Their “Nuka System of Care” is a great example of DIY Health Reform driven at the grassroots level. The core insight that has led to truly impressive outcomes has been that for 75% of healthcare spend (chronic disease management), it is the individual or their family who is in control of the decisions that drive outcomes. The graphic below depicts this.

Who is in control of decisions determining outcomes

The video below is from Mark Begich (Representative from Alaska) describing the results of this model. If you are interested in an in-depth perspective, leaders from the SouthCentral Foundation explain how they do it in two parts.

Some nominal efforts have been made to weave in the individual into the care process. Even simple secure messaging has been held up as a great breakthrough in medicine. I liken the limited efforts to invite the patient into the process to seeing a muddy puddle of water in the Sahara Desert — it’s a welcome improvement but far from optimal. The healthcare organizations that will not just survive, but will thrive, are recognizing that a tweak to a system that was designed around the patient as billing vessel won’t get the job done.

As we’ve seen in many areas, tweaks to an architecture designed around a different model never succeed in the new paradigm. If they did, Yahoo or AOL would be the leaders in social media. Expect to see the equivalents of Facebook and Foursquare emerge in healthcare.