Mobile ad network Millennial Media just debuted on the New York Stock Exchange under the symbol “MM,” and saw shares pop 97 percent in the first trade of $25. The company initially priced its IPO at $13 per share last night, after increasing the range on Tuesday. At $25 per share, Millennial’s valuation jumps to nearly $2 billion. Trading reached as high as $27.90 in early trading. UPDATE: Millennial closed at $25 per share.

Millennial which filed its original S-1 in early January, raised over $130 million in the offering, which is up from $75 million originally stated in earlier filings.

Founded by Paul Palmieri, the Baltimore-based company has raised $65 million in venture funding from Charles River Ventures, NEA, Bessemer Venture Partners, Columbia Capital and others. Palmieri issued this statement today: “Today is an exciting day for our company, and also a significant milestone in the maturation of the mobile advertising industry. We have spent the last six plus years helping create what’s now a multi-billion dollar mobile application advertising market and we look forward to continuing to drive growth and innovation in the space.”

In 2010, Palmieri jokingly called Millennial the quiet giant as competitors like Quattro (acquired by Apple) and AdMob (acquired by Google) stole the spotlight. Clearly that’s no longer the case. 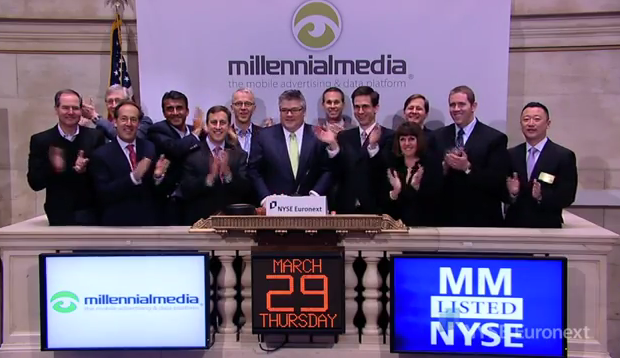