On March 1st Facebook let the world feast its eyes on Timeline for Pages, and today after a month of voluntary migration it will force all Pages to switch to the redesign. But don’t worry,  it doesn’t significantly impact the rate of new Page Likes, and 95% of Pages who’ve switched have seen more Likes of their posts and people talking about them according to a study that social marketing platform Wildfire gave TechCrunch an early look at. Only megabrands with over 10 million Likes have seen reduced engagement, but this was in part due to a lull following press exposure during the Timeline launch. Note that these are early results and it will take a while for the exact impact of Timeline to be clear. We’ll be following up as data emerges.

There’s more good news for smaller Pages. A study shared with us by enterprise marketing platform Hearsay Social shows local business Pages with fewer fans get 5x more exposure in the news feed, and 8x more of the fans reached will engage with a post. That means big brands with lots of local branches can get 40x the engagement by having a Page for each store.

In the first week after Timeline for Pages launched 8 million Pages voluntarily switched over, but limited early data showed the migration significantly reduced the rate at which big pages were gaining fans. But data from Wildfire’s much more comprehensive study of 43 brands had rosier results.

First, fan growth rate was only down between 0.02% and 0.06%, which is essentially insignificant. That’s no win for Facebook’s design team but at least growth didn’t plummet. Small Pages with under 1 million fans are seeing engagement soar. People Talking About This, a measure of total mentions of a brand, is up 67.4%, comments per post is up 40%, and Likes Per Post is up 60.3%. Middle to large Pages with 1 million to 10 million fans are also doing alright with PTAT up 28.858, Likes per post up 13.56%, though comments per post is down 17.43%. Another study by social marketing platform Vitrue of a dozen mid-size Pages including Harley Davidson showed that their posts received 38% more likes and 3.5% more comments after launching Timeline.

As some of our commenters have noted, the switch to Timeline shouldn’t necessarily have such a big impact on the engagement with posts which are predominantly viewed through the news feed. There are few possible reasons for this. 1. Facebook may have artificially ratcheted up the news feed visibility of Pages who’ve switched. 2. The launch of Timeline for Pages may have led businesses to concentrate more on Facebook marketing and publish higher quality posts. 3. Those users visiting Page Timelines may be leaving significantly more Likes and remember the Page more leading to additional mentions. 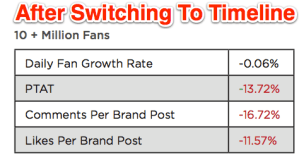 Megabrand Pages with over 10 million fans  (think Michael Jackson, Coca Cola, Disney, and MTV) faired worse after Timeline. PTAT was down 13.72%, comments per post down 16.72%, and Likes per post down 11.57%. This data was confounded, though, as all 7 of these Pages that Wildfire studied were promoted by Facebook in press around the launch of Timeline, and saw rapid returns to pre-press engagement levels that looked like declines. However, we’re also hearing from some other Facebook Page management platforms that some megabrand Pages are seeing engagement increases too, so we’ll need to wait for more data to confirm the impact of Timeline.

So most Pages should be excited about the new Timeline features. You can now also download the full report in exchange for an email address

As for the study commissioned by Hearsay Social from independent researcher Mainstay Salire (Update: now publicly available for download in exchange for an email address and there’s also a blog post of insights and an infographic), the 40x value of local fans should alter the Facebook marketing strategy of brands with locations around the US or the world.

Hearsay Social’s CEO Clara Shih tells me Having a massive, multi-million fan count “might be good bragging rights, but from a fan’s perspective they’re not as special, they’re just one of millions rather than part of a personalized community.” If brands willing to invest the time and money to manage all their local Pages it can give directly boost to their business. That’s because some of that 8x engagement comes from more link clicks to ecommerce sites that drive social marketing ROI.

What should brands with just one big Page do now? Hunt down unofficial Pages that represent their local stores and either claim them or have them shut down, then start official ones. Hearsay’s Rogue Page Finder can help. Then establish local admins for each Page or use a corporate/local-focused Page management software like Hearsay Social to syndicate updates from your main brand Page to that of each store.

Timeline and managing local Pages sure doesn’t make Facebook marketing any easier, but it does make it more effective. For these reasons, expect the Page management software industry and importance of trained community managers to keep growing.

Check out my in-depth guide “How To Use Facebook Timeline For Brand Pages: New Feature Details” to learn how to market using Timeline.

[Note On Updates: This article has received several updates to include additional disclaimers, studies, and context. These updates include a note that these are early and not necessarily conclusive results, the potential reasons the switch to Timeline is impacting news feed post engagement rates, that some social marketing platforms are seeing increased engagement on megabrand Pages that have switched to Timeline, and Vitrue’s study which concurs that small and mid-size Pages are seeing benefits after switching to Timeline.]