Advertisers looking for higher ROI from their Facebook self-serve ads may soon see some new tools. Facebook tells us its testing new features like “Objectives” which lets advertisers ask Facebook to “Show this to people who are more likely to: [Like my Page] or [Install my app] or [Click on my ad or sponsored story]”. It’s also trying a simpler interface and allowing more targeting options to be layered.

The test is a response to comments from advertisers who wanted “more guidance on how to optimize their campaigns based on their marketing goals.” By using it’s data of which users frequently Like Pages or install apps to help advertisers, Facebook could get them better results and encourage them to spend more.

With the test features, advertisers can specify the action that they want to their ads to achieve. Most advertisers go into the self-serve interface with particular goals in mind, and this lets them communicate these goals to Facebook. Also, the current interface only allows ads to target precise interests (for example, hiking) or broad categories (say, outdoor activities) in one campaign, the new interface would allow them to do both.

This is only being tested with a small group of advertisers for now, Facebook says, but presumably it will expand the program if the test goes well. This comes after Facebook made some bigger ad announcements a month ago at its first Facebook Marketing Conference, including the introduction of ads in the mobile news feed.

Facebook doesn’t want to deliver clicks and impressions, it wants ads to be content that achieve advertisers actual goals. With over 845 million users, reaching the right ones with ads can feel like digging for buried treasure. The new “Objectives” tool could give advertisers a metal detector. 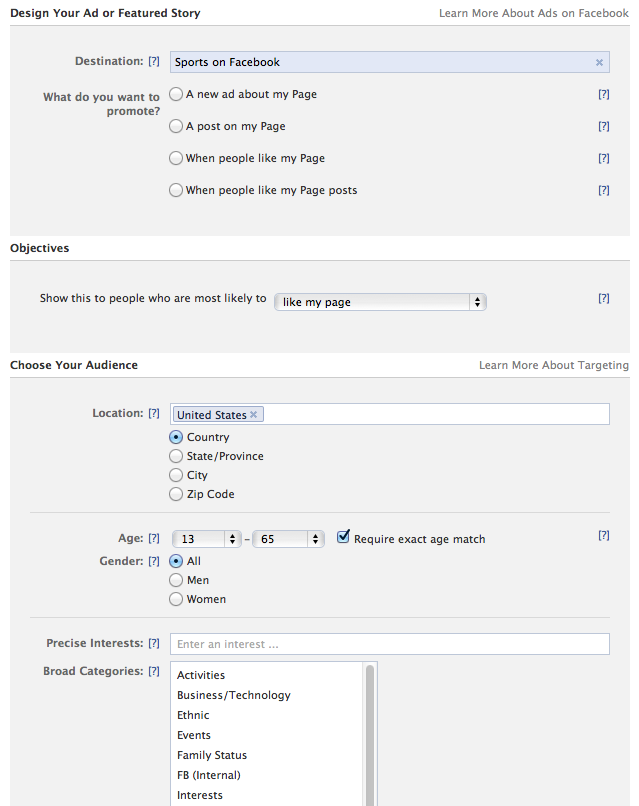 [Additional blogging by Josh Constine, thanks to HasOffers for the first screenshot]