The LG Spectrum has spent a long while with me. In fact, LG’s asking for it back, saying that my review period has come to an end. I didn’t get around to the full review until now because (to be perfectly honest with you) I didn’t really want to sit down and talk about the LG Spectrum for X amount of hours.

True, there’s nothing necessarily “wrong” with the phone. It’s got solid specs, performs alright (I guess), and has a downright gorgeous display. But at the same time, there’s a long list of issues that I have with the phone, and most center around design. 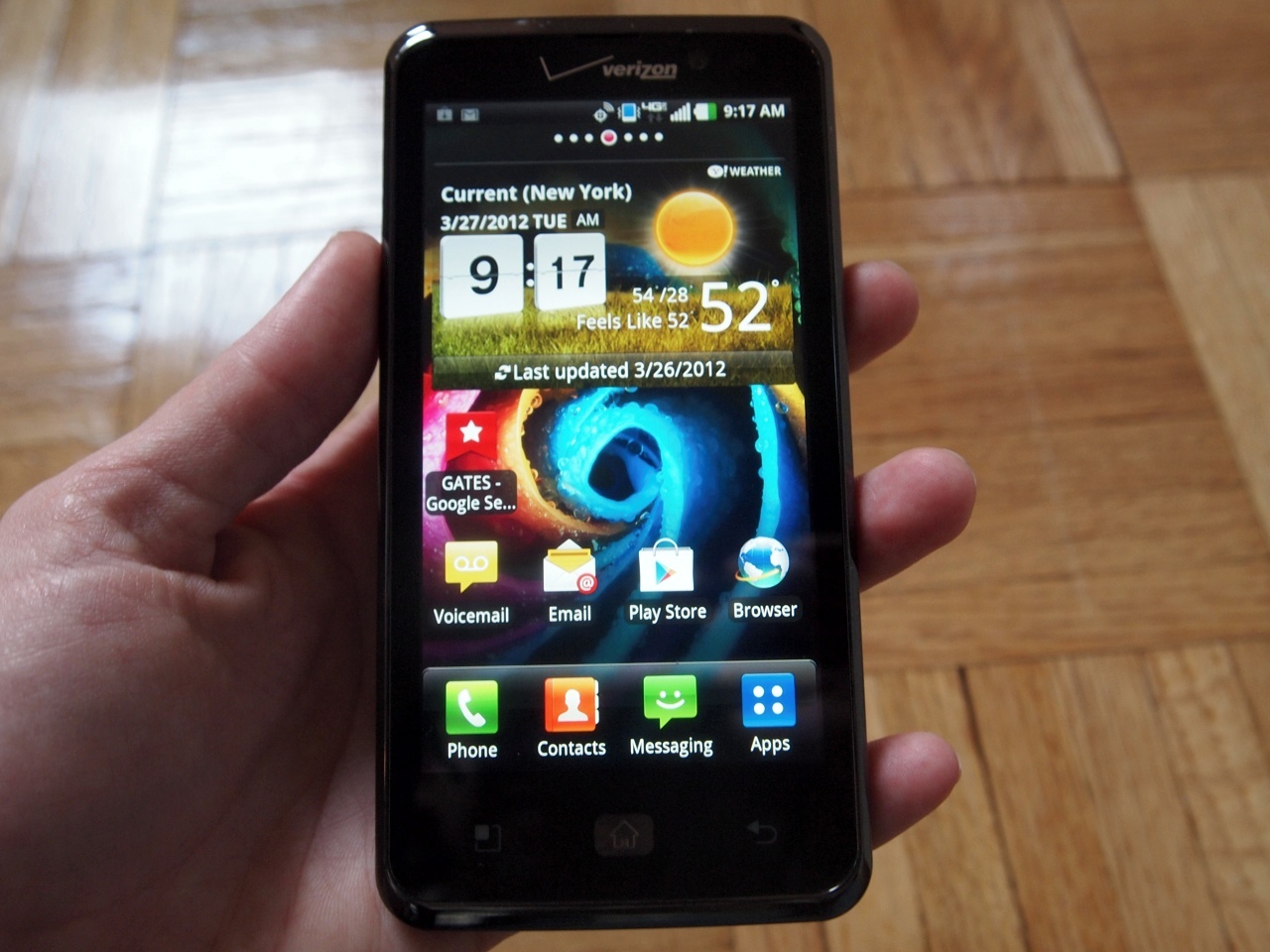 Ah, where to begin?

The LG Spectrum isn’t the prettiest phone I’ve ever laid eyes on. In fact, it doesn’t even really compete. In a world of sexy iPhones, captivating Galaxy Notes, and compelling Nokia Windows Phones, the LG Spectrum likely won’t even get your attention. It sports some of the same design language as the Nitro HD, but for some mysterious reason LG chose to put a nasty plastic panel across the backside. It has a little textured print on it, but feels slick and cheap like plastic. The 4.5-inch display is surrounded by a black bezel and gunmetal silver tapered edges.

Every part of it soaks up your fingerprints like that’s what it was built to do. This, of course, only lends to that cheap feel I mentioned before.

Then there’s build quality. The Spectrum creaks and bends when stressed in a way that makes me highly uncomfortable. People have dealt with cheap-feeling phones for a long time now, and if you’re upgrading from something two years old that may not bother you so much. But if you’re moving from an iPhone or any of Samsung’s or HTC’s newer devices, you may be disappointed at just how creaky this little guy is. 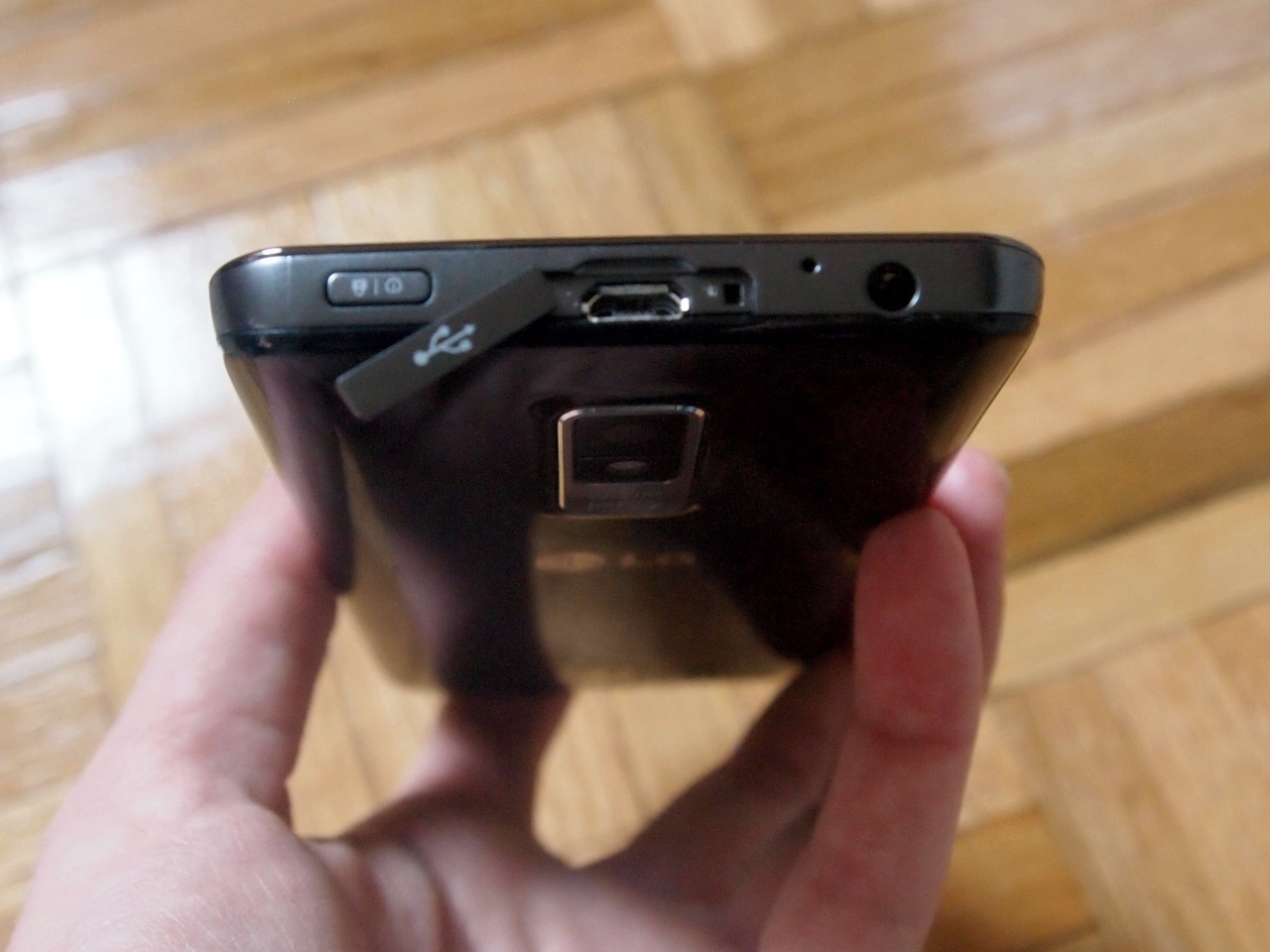 MicroUSB access is square on the top of the phone, along with a 3.5mm headphone jack and the lock button. The volume rocker can be found on the left hand side, and three capacitive home buttons are down at the bottom. I’m not a fan of this plastic cover LG likes to put on the MicroUSB port — it’ll surely break off at some point — and it doesn’t help that the port is right where your hand would be if you chose to play around with the Spectrum in landscape while plugged in.

We usually reserve a place in our reviews for that extra something special a phone has. The Note had its S-Pen, the Droid 4 had its amazing QWERTY keyboard, the GalNex had ICS and NFC, and the list goes on and on. Almost every phone has some extra umph, whether it’s by way of a really cool feature, interesting design, extra hardware or a first-of-its-kind spec.

The Spectrum has nothing like that, and thus I’m left filling up a review section with nothingness.

Let’s just start out with LG UI. I’m going to be upfront when I say that all of the manufacturer overlays are awful. I’d say that Samsung’s TouchWiz (or whatever they’re calling it these days) and HTC’s Sense are the most visually appealing and useful, while Motorola’s is meh. LG’s sucks.

Everything’s bubbly, round, and it looks like a children’s version of a user interface. Of course, these are just aesthetic preferences, so if you like the look and feel of LG UI then boo on me. The only problem is that it has no real use. The trick with a custom UI is adding value. Users will get over the fact that you’re snatching away their pure Android if you give them something cool like HTC’s weather widget or Samsung’s special contacts scroll feature. It’s the little things that count.

With LG UI, the only “little thing” I can find is that apps are automatically categorized by type. Unfortunately, I would rather arrange apps on my own and keep the little headers out of it. LG also included a little media carousel in the UI, which would be much more pleasing if it wasn’t the laggiest thing on the phone.

Pre-loaded apps include Netflix (which should be nice on that gorgeous display), ESPN ScoreCenter, Amazon Kindle, BlockBuster, NFL Mobile, and a handful of Verizon apps like VZW Navigator, V CAST, and Verizon Video. 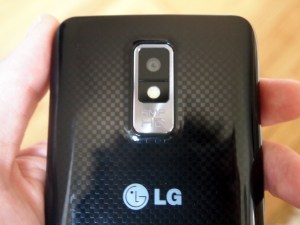 I’m actually quite impressed with the Spectrum’s 8-megapixel camera. It seemed to reproduce color slightly better than my iPhone 4S, which was a pretty big shock after dealing with this phone for a couple weeks. The shutter’s not nearly as fast, and I’m not a fan of the camera app UI, but I still give the Spectrum camera a fly.

It does have more trouble in low-light than my iPhone 4S, but perhaps not in the way you’d expect. Sometimes you take pictures in a dark environment to recreate that eery, dark look. In fact, that’s the only reason you should take pictures in a dark environment. The Spectrum tends to brighten pictures automatically, even with the flash off, and it makes anything taken in a cloudy bar or dark room look awkward.

Video capture was fine, but nothing to call home over. Switching between low and well-lit areas takes some time, and playback was a bit grainy for what I was expecting. But on the whole I think the LG Spectrum camera is just fine.

Comparison shot between the LG Spectrum (left) and the iPhone 4S (right): 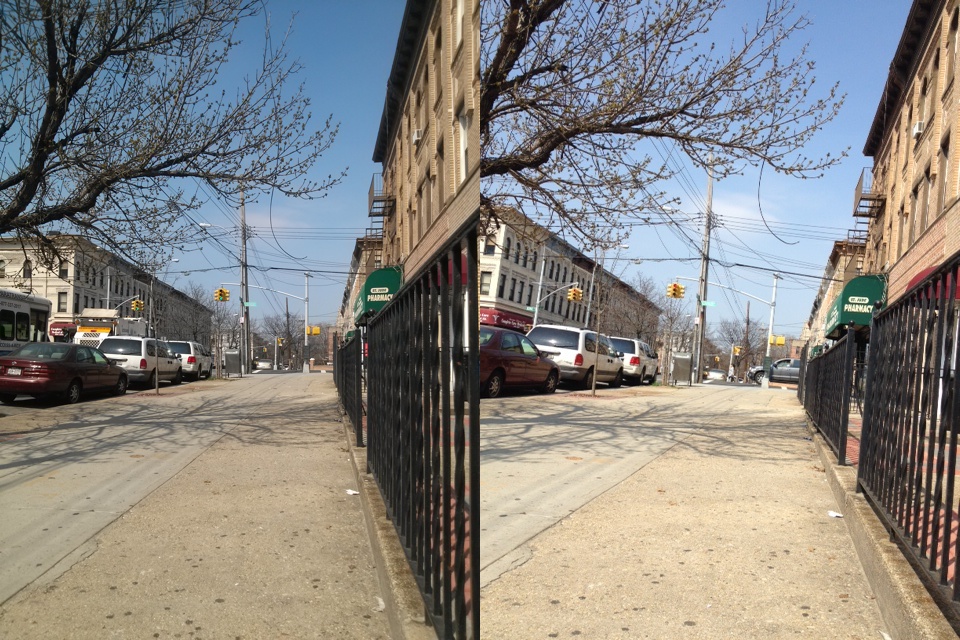 Go ahead. Breathe a sigh of relief — you’ll get all love and no hate while we chat out the display.

The Spectrum’s 4.5-inch 720p display is everything and more. I tend to lean toward Samsung’s displays, especially of the Super AMOLED Plus persuasion, but LG’s TrueHD screen is seriously beautiful. Blacks are sharp and deep, text is crisp, colors feel real… I mean honestly, it doesn’t get much better. 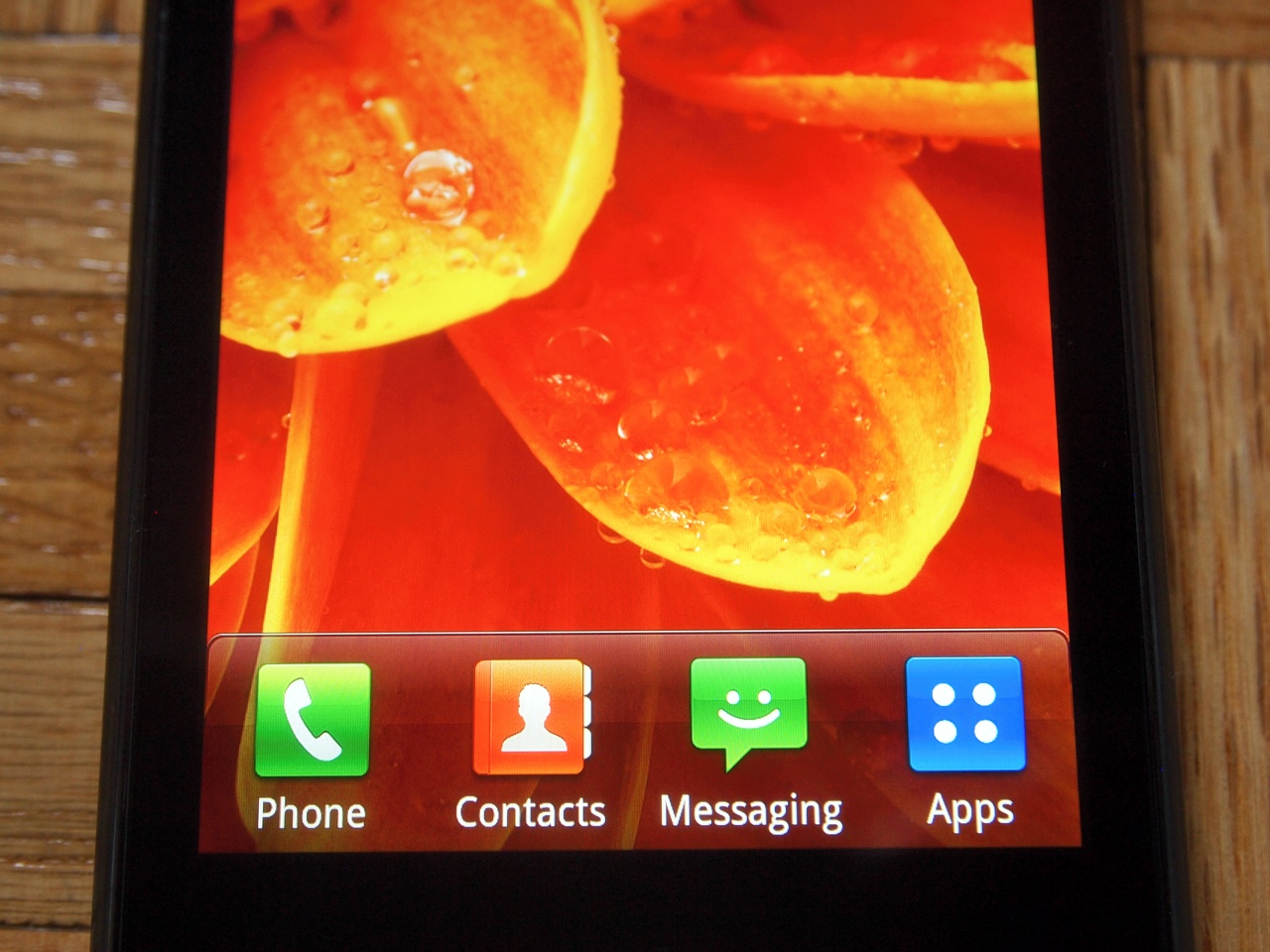 There is one thing that’s sticking out to me, but it’s not necessarily make or break. The display sports a 16:9 aspect ratio, and while many phones share this trait, the Spectrum display seems awfully long and skinny. This wasn’t so apparent when watching videos in portrait (and you’ll have to excuse the fact that I’m coming off of a Galaxy Note review, which obviously makes a difference), but I just thought it worth noting.

The display is coated with Corning Gorilla Glass so there shouldn’t be any huge scratching issues, but as I mentioned before, you’ll be hard-pressed to keep your finger prints off this thing.

Generally speaking, this phone didn’t live up to my expectations in the performance department at all. Laggy? All the things!

Let’s just start with the most basic actions, scrolling between home screens and opening apps. More than once (in fact, more than a handful of times), I clicked the apps icon… waited… and clicked it again. Of course, this led to the app tray opening and closing in a flash. It was so slow, that I had closed it before I opened it.

This is the kind of stuff that happens over and over with the Spectrum. Pinch-to-zoom… wait… double-tap to zoom… zoom in and out in a flash. It’s hella annoying.

But it gets worse.

There’s some strange flaw in the Spectrum that has to do with Car Mode. Basically, the Spectrum decides when you’re in a car, whether you’re actually in a car or not. When it makes this decision, as displayed by a tiny steering wheel icon up top, the phone reverts back to the home screen and flashes black. Repeatedly. To make matters worse, you can’t really access the car mode app within Android as far as I can tell.

Oh, and I’m not the only one to notice.

The problem persisted so much that I couldn’t complete my testing. Usually, I like to run each of my three tests three times each, just to be fair, but this Car Mode bug made that impossible. So unfortunately, I’m going to have to hit you with the results from the first of each test. In Browsermark, we saw a score of 57573, which is nice compared to the Note’s score of 48,610. The Spectrum unfortunately did not test better than the Note on Quadrant (a full-fledged benchmark program), scoring 2448 compared to the Note’s 2703.

In the data department I was seeing an average speed of 4.5Mbps down and 1.6Mbps up on Verizon’s 4G LTE network. That’s not so hot knowing how fast Verizon 4G can be.

And as we migrate into the battery department, the disappointments only persist. I was shocked to find that the Galaxy Note, with its massive HD Super AMOLED screen and 4G LTE radio could hang with me all day. After reviewing the Note and the Droid RAZR Maxx, I had hoped that phone makers were starting to figure out how to make 4G a viable option with solid battery life. I was wrong, at least about LG. 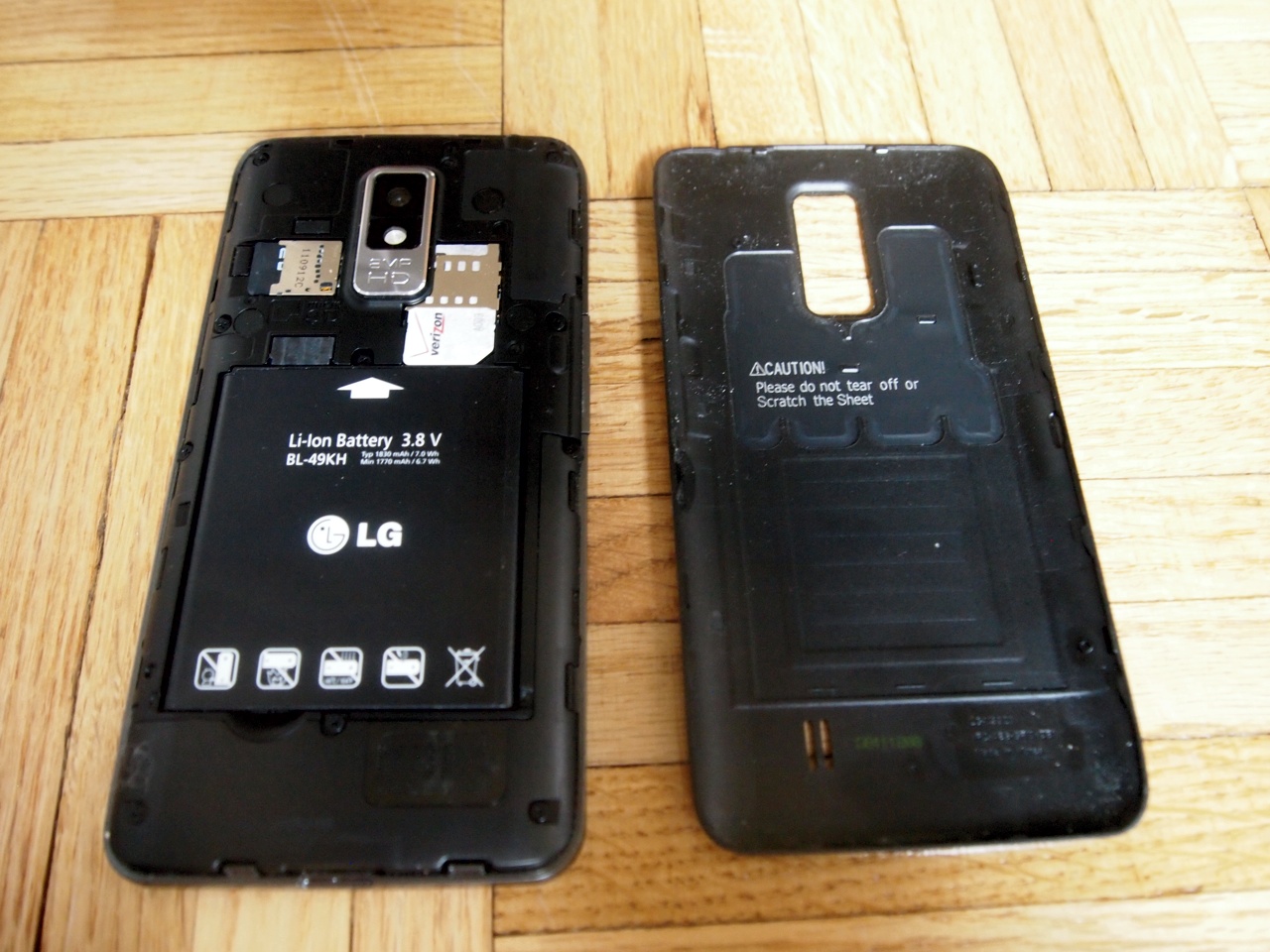 The Spectrum doesn’t last all day with me. In fact, it barely makes it to dinner time. I’ve been fiddling with settings for the past few days and I noticed I can get just a little bit of extra life with certain services, like location services, shut down, but I’m still not pleased. And on top of that, I don’t know where the hell I am.

When we did the official battery test, we found that the Spectrum only lasts a little over three hours. Of course, this is a restless workout for the Spectrum. We run it through a program that constantly loads Google Image search pages, but at any time I can pop out of the browser and play a game, make a call, etc.

Still, I’d like to have seen more out of the Spectrum. The Droid 4 only hung in there for three hours and forty-five minutes while the Droid RAZR Maxx (Motorola’s battery beast) stayed with me for a staggering eight hours and fifteen minutes.

Head-To-Head With The Galaxy Nexus And Nitro HD: 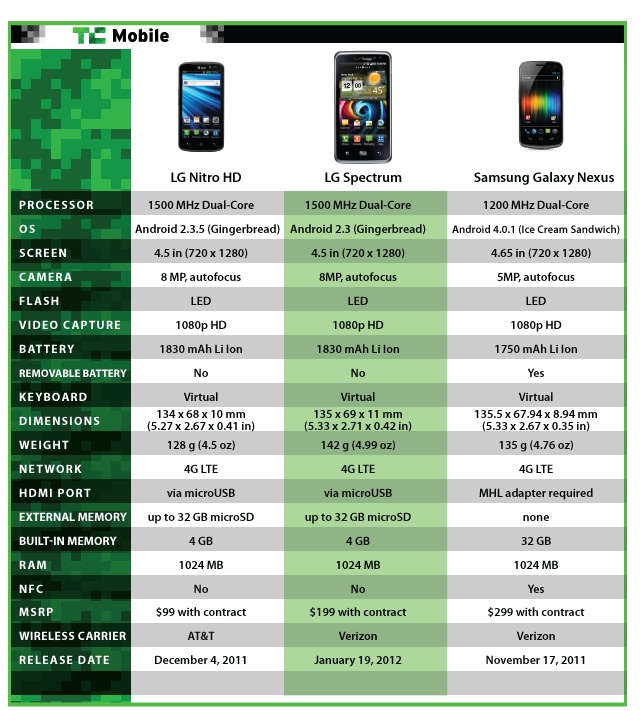 The problem with the LG Spectrum is that it’s a sheep dressed in wool. I hoped against hope that the performance of the phone paired with an amazing display and 4G connectivity would rid me of my desire to hurl something so freaking ugly against a wall. But it did not. There was a bug that lasted through the entirety of my two weeks with the phone, it soaks up prints, lags like a fat man in a marathon, and is just plain ugly.

The phone looks cheap, and performs like it’s cheap, and no one deserves to live through two years of frustration like this.

Check out all of our LG Spectrum review posts here.