Editor’s Note: This guest post is written by Nir Eyal, a founder of two startups and an advisor to several Bay Area companies and incubators. Nir blogs about technology and behavior engineering at NirAndFar.com.

In advertising, marketers reinforce a behavior by linking to the promise of reward. “Use our product,” they claim, “and you’ll get laid”; it’s the gist of many product pitches from soap to hamburgers.

But online, feedback loops aren’t cutting it. Users are increasingly inundated with distractions, and companies find they need to hook users quickly if they want to stay in business. Today, companies are using more than feedback loops. They are deploying desire engines.

Desire engines go beyond reinforcing behavior; they create habits, spurring users to act on their own, without the need for expensive external stimuli like advertising. Desire engines are at the heart of many of today’s most habit-forming technologies. Social media, online games, and even good ol’ email utilize desire engines to compel us to use them.

At the heart of the desire engine is a powerful cognitive quirk described by B.F. Skinner in the 1950s, called a variable schedule of rewards. Skinner observed that lab mice responded most voraciously to random rewards. The mice would press a lever and sometimes they’d get a small treat, other times a large treat, and other times nothing at all. Unlike the mice that received the same treat every time, the mice that received variable rewards seemed to press the lever compulsively.

Humans, like the mice in Skinner’s box, crave predictability and struggle to find patterns, even when none exist. Variability is the brain’s cognitive nemesis and our minds make deduction of cause and effect a priority over other functions like self-control and moderation.

If you’ve ever asked someone a question while he or she was engrossed in a video game, only to receive a mumbled “sure, ok, whatever,” you’ve seen this mental state. Players will agree to almost anything to get rid of distraction and keep playing. Variable rewards seem to keep the brain occupied, removing its defenses and providing an opportunity to plant the seeds of new habits.

Bizarrely, we perceive this trance-like state as fun. This is because our brains are wired to search endlessly for the next reward, never satisfied. Recent neuroscience has revealed that our dopamine system works not to provide us with rewards for our efforts, but to keep us searching by inducing a semi-stressful response we call desire.

Though it pains us at times, it’s this mental hardwiring that kept us alive as a species. We are the most relentlessly curious species on the planet, having made more sense of our surroundings than any other animal. But it is this same impulse, to search endlessly, never satisfied, that creates habitual behavior from many new technologies.

Variable rewards come in three types and involve the persistent pursuit of: rewards of the tribe, rewards of the hunt, and rewards of the self. Though the tools have changed, the basic motivation for each is the same as it was 200,000 years ago. 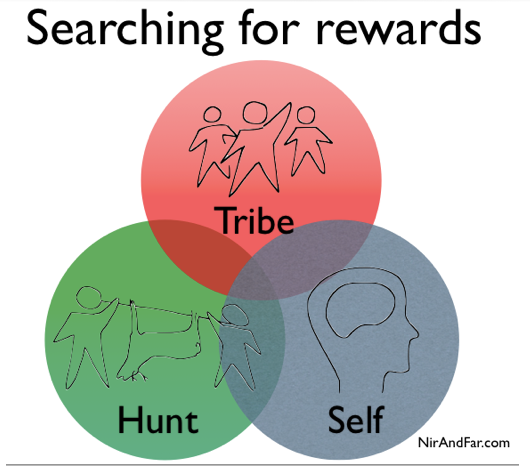 REWARDS OF THE TRIBE

We are a species that depends on each other. We have specially-adapted neurons to help us feel what others feel, which provides evidence that we survive through our empathy for one another. We’re meant to be part of a tribe so our brains seek out rewards that make us feel accepted, important, attractive, and included.

It’s no wonder that the use of social media has exploded over the past few years. Facebook and Twitter, to name just two of the most popular examples, provide well over a billion people with powerful social rewards on a variable schedule. With each tweet and post, users wonder how much social validation they’ll receive. We even measure our clout with Klout to put a number on our level of influence.

REWARDS OF THE HUNT

But as sociable as we are, our individual need for sustenance is even more crucial. The need to acquire physical things, such as food and supplies, is part of the brain’s operating system and we clearly wouldn’t have survived the millennia without this impulse. But where we once hunted for food, today we hunt for deals and information.

The same compulsion that kept us searching for food coerces us to open emails from Groupon and Appsumo. New shopping startups make the hunt for products entertaining by introducing variability to what the user may find next. Pinterest and Wanelo keep users searching with an endless supply of eye candy, a trove of dopamine flooding desirables.

To see an example of how the hunt for information engages users, look no further then the right side of this page. There, you will find a listing of popular posts. Using intriguing images and short, attention-grabbing text, the list is a variable reward mechanism designed to keep you hunting for your next discovery.

REWARDS OF THE SELF

Finally, there are the variable rewards we seek for personal gratification. For example, from birth, things that stimulate our senses mesmerize us. Babies put everything in their mouths for the same reason there are flashing neon lights in Las Vegas. We love novel sensory stimulation.

We also seek mastery of the world around us. Game mechanics, found everywhere from Zynga games to business productivity apps like to-do lists, provide a variable rewards system built around our need to control, dominate, and complete challenges. Slaying new messages in your inbox stimulates neurons similar to those stimulated by playing StarCraft.

Almost all of the technologies mentioned above combine the three types of variable rewards, increasing their effectiveness in creating user habits. Email, for example, is addictive because it provides all three reward types at random intervals. First, we have a social obligation to answer our emails (the tribe). We are also conditioned to know that an email may tell us information about a potential business opportunity (the hunt).

And finally, our email seems to call for us to complete the task of removing the unopened item notification in a sort of challenge to gain control over it (the self). Interestingly, these motivations go away as soon as we’ve actually opened all our emails and the mystery disappears. We’re addicted to checking email while there is still variability of reward and once that’s gone, emails languish in our inboxes.

As B.F. Skinner discovered over 50 years ago, variable rewards are a powerful inducement to creating compulsions. Today, technology companies are creating new habits by running users through a series of desire engines—and variable rewards fuel the chain reaction. Understanding what moves us to action allows us to build products that are aligned with users’ interests and gain greater control of our own technology-induced behaviors.