Palo Alto-based Who’s Near Me Live, abbreviated as WNM Live, is a two-year-old company that’s found moderate success by launching first on Windows Mobile and Windows Phone, before porting its mobile app to the iPhone, where it arrives today with a more limited feature set. The service, essentially a location-based chat similar in some respects to the newly acquired Yobongo, now boasts 400,000 users across its mobile, web and Facebook applications combined. Almost all of that user base is coming from mobile, however.

The most unique thing about this app is one of its least-used features: on Windows Phone, it supports 3G/Wi-Fi calling. Yes, with phone calls with strangers. The new iPhone version, unfortunately (fortunately?) won’t have the same option at launch, so it’s safe to use for now.

The decision to grow WNM Live’s user base first, before heading to the iPhone, was a conscious strategy on the part of founder Brian Hamachek.

“I knew if I had launched this on iPhone right from the get-go, you have to have a user base or it’s just not interesting,” he says. “Instead of launching on iPhone and Android as most people were doing, we looked at Windows Mobile and Windows Phone 7 because we knew there wouldn’t be any competition, the users would probably be a little more forgiving and would put up with having a little bit smaller user base for the time being.” 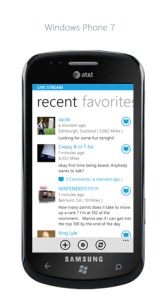 The app, which lets users post updates and reply to those posted by others, is differentiated from the new “ambient location” (i.e., people-stalking) apps like Banjo, Highlight and Glancee, because it’s not about aggregating and tracking check-ins or geotagged tweets, nor is about running the app in the background to ping you when friends are nearby.

In fact, it’s not about tracking your friends at all – it’s about meeting new people.

No, not that either.

It’s also heavily moderated with a zero tolerance policy for spam and inappropriate content to help keep the crazies out, too. This hasn’t apparently been much of an issue so far, as they’ve only had to ban around 1,700 users to date.

Users can post updates which can be cross-posted to Facebook, plus engage in one-on-one IM-like chats and picture message exchanges, although with the latter, the app requires first that at least five text messages have been sent without the sender getting blocked…you know, to cut down on the “here’s a picture of my junk” kind of thing.

There’s also that above-mentioned, pretty out-there feature (or maybe I’m just old) that lets users actually phone other users via the app. There’s no toggle for this, either. You can accept, reject or block a caller, but you can’t turn the setting off. When the app is open, you’re open to calls. On Windows Phone, the calls go over both Wi-Fi and 3G, but Hamachek expects restrictions when they get around to porting this feature to iPhone. It will probably only support Wi-Fi calls at that point, he admits. The feature doesn’t seem very popular right now – the app sees less than 1,000 voice calls per day.

One thing (OK, besides getting calls from strangers) that does concern me about WNM Live’s direction: Hamachek says he doesn’t use the app himself.

“Myself, personally…this isn’t something I have a need for in my life,” he says. “There are use cases for me, like finding a tennis partner. But on a day-to-day basis, I don’t need to find a tennis partner,” he explains. “There’s a use case for someone like myself, but my personal motivation is to build something that’s used by so many people.”