From personal experience, losing your phone (especially a smartphone) can be both frustrating and expensive. Lookout, a company that offers security services for a number of smartphone platforms, has conducted a phone loss study, which revealed that lost phones, if unrecovered, could cost U.S. consumers more than $30 billion this year. As part of the study, Lookout is debuting Mobile Lost & Found, a site for people to discover the places where phones are most often lost, the likelihood of losing a phone by region, and the financial impact of lost phones.

Lookout’s missing device technology for Android and iOS helps locate your lost or stolen phone on a map or sound a loud alarm to find it nearby.

Lookout’s analysis, which parsed through data from more than 15 million users, found that demographics and behavior are the largest factors influencing phone loss. Over the course of 2011, Lookout’s phone locater technology located 9 million lost smartphones, which equals one phone every 3.5 seconds. In total, Lookout found that U.S. consumers lose their phone about once a year. If unrecovered, that could cost every smartphone owner more than $250 a year each.

Interestingly, Philadelphia residents lose their phone two times more than New York City dwellers, while San Franciscans and New Yorkers lose their phones three times more than Chicagoans. Lookout says that many of the cities with highest rates of lost and stolen phones also were in the top ranks for the FBI’s most recent crime statistics, including Cleveland, Detroit, Oakland and Newark.

The study also showed that specific locations were more popular with lost phones than others, with coffee shops and bars topping the list. In addition, people lose their phone most often at night; 67 percent of phones are located between the hours of 9 p.m. and 2 a.m. local time. 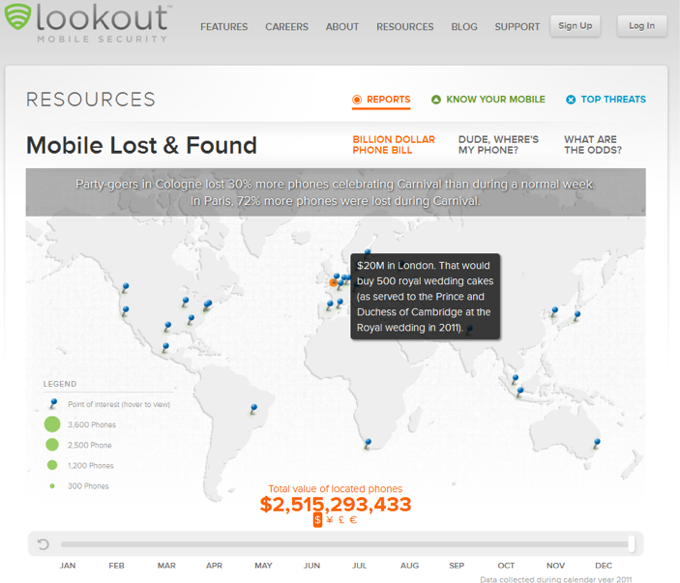