There are plenty of companies trying to create new forms of group texting or social networking. There are far fewer who are trying to offer a messaging service that crosses the web, email and mobile devices in a seamless way. Facebook is perhaps the most obvious example, but its utility is social — you might not want to use it for work, or for organizing your kids’ little league game, or for communicating with the parents of a class you’re teaching.

Enter SendHub, a startup in this year’s Y Combinator class, that has already started to get some serious traction by focusing on professionals. The company offers a clean interface for creating and organizing groups of people, and communicating back and forth with them over their desired format.

The result is that it has been growing fast. When Sarah Perez covered SendHub in February, the company was sending 30,000 messages a month. Now, it’s sending around that amount per week. Check out the graph below. The numbers are still small, but they’re in the right direction. YC partner Paul Graham says that its growth looks like AirBnB’s in the early days. 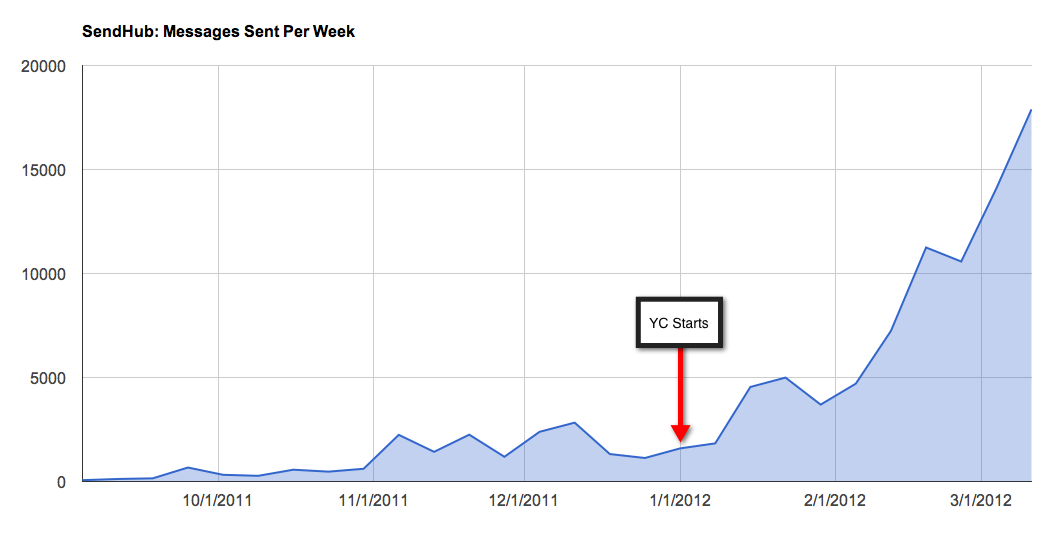 What types of users are causing this growth? A few big partnerships are helping, including one with Teach For America and another with the Florida Department of Education, cofounders Garrett Johnson and Ash Rust tell me. But some people are using it for social purposes as well, including a group of cross-fit trainers who coordinate times to work out. And there’s a variety of folks who veer into Facebook Messaging territory by communicating with each other to keep social activities like beer crawls together.

How does the app work? You’ll need to go to the website, sign up with Facebook or Google or a new user account, then enter the information of the people you want to share with. You can do it manually, or import CSV docs from Gmail, Outlook and other email clients. You’ll also get a new local phone number (the company uses Twilio’s voice messaging platform on the backend).

Then you can start writing messages and texting them out to people. Other users can also join using a keyword you choose. So a local business could invite existing customers via uploading its CSV file of them and asking new users to text in to sign up (which is how most people are joining). You get a unique new phone number, and you’re asked to either add contacts manually or via a bulk importer.

Users who receive the texts are also sent a link to go back and rate the message or block the sender. So if a local business starts spamming too many deals, they’ll be able to get feedback quickly.

But why did the growth take off? The founder joined YC with a product in hand, but they tell me they got a bunch of design help that has made the site easier to use for people. Other cofounders with specific technical skills have also helped them with scaling their services for new waves of users. And, they also got encouraged to focus on every single user who called in. Right now, they’re sleeping shifts so they can respond to any issues 24 hours a day.

Where to next? “Email and social will be our primary focus in the short term, Rust says, but we expect voice will be an important frontier for us to develop.”

“We did a basic integration and we’re seeing over 3,000 calls a month. IM is attractive, but it’s not requested nearly as much.”

These types of messaging apps are inherently viral, but sometimes have trouble making money as a result of too much success (see: GroupMe, Beluga). SendHub provides a set of premium features instead. If you want to go above 1,000 messages a month, you’ll need to pay at least $10 a month. If you want more than three groups, larger API requests, the ability to bring your own number, phone support, or a branded profile page,  you’ll need to buy more expensive options.

The team still has a couple things to work out. In testing it out, the bulk importer had some trouble uploading my contact list. And the interface has some oddities, like an error message telling you that you need to type in a ten digit telephone number, which appears as you’re typing your number in. But all in all it feels right, and the engagement numbers seem to indicate that many more users will, too.