Real-time push notification service Boxcar, currently available on both iOS and Mac OS X, has just closed on a $150,000 seed round with Kima Ventures, bringing its total raise to date to $211,000. The additional funding will be used to grow the company’s consumer-facing services, expand to other platforms (Android in 2 months! Windows Phone!) and will aid in the company’s development of B2B products, we’re told.

And yep, that means what you think it means: Boxcar will soon offer push notifications as a backend service for mobile developers’ use.

In other good news: Kima Ventures is shareholder in Sparrow, the hot, new iOS mail client that serves as a worthy replacement to Apple’s own mail app. Not entirely coincidentally, Boxcar says it now works with Sparrow to provide the push notifications feature Sparrow currently lacks. (Well, that’s good enough reason to download the Boxcar right there, if you haven’t already, I’d say. And Sparrow, of course, I heartily recommend. Go read all about it over on Techmeme.) 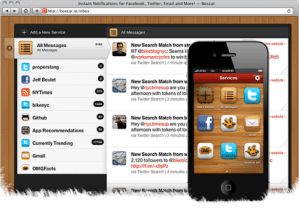 For a little background, Boxcar received a lot of attention prior to the launch of iOS 5. When MG covered the iOS version of Boxcar back in March 2011, for example, he begged Apple to copy its notification system immediately. It was that good. But back then, Boxcar was filling a hole in Apple’s OS by providing support for a notifications center where all your app’s messages could be reviewed at a glance. Remember, this was a time before you could just pull down a drawer from the top of your iPhone’s screen. Instead, your notifications appeared as pop-ups, then disappeared, forever lost in the ether.

Apple, of course, since overhauled its notifications with the launch of iOS 5 in fall 2011, seemingly leaving much of the need for third-party systems like Boxcar in its wake. Except for the rare app like Sparrow, which launches prior to supporting push, the need for an alternative system (albeit a more configurable and more powerful one) is somewhat less pressing.

Then there’s Boxcar for Mac. Even though Boxcar serves as a viable counterpart to the ever-popular Growl, both services are now finding themselves in the position of having to compete with core OS features, thanks to the forthcoming release of Apple’s latest version of OS X (Mountain Lion), which is introducing its own push notifications feature.

So where does that leave something like Boxcar? And why is it getting funding now, of all times?

As it turns out, those “B2B” features in development are the big news here. Boxcar will soon be introducing a cross-platform push notifications service designed for developers’ use. This puts it in the same space as competitors like Urban Airship, Xtify, StackMob, Parse and others.

The idea with the new service is to not only provide push and “heavy lifting” for developers, but also help them create sustainable app businesses. To be clear, this is different from what most of the competition is doing today – instead of simply providing developer tools to power backend services like push, Boxcar will allow developers to offer push as an option to their customers – for a fee. The app’s end users will be able to pay for push notifications for the app on either a 6-month or yearly subscription basis, if they choose.

Already, one flagship implementation of this offering is in the wild: Twitterlator Neue, a Twitter app for iOS, is now delivering push notifications that are powered by Boxcar. The move hasn’t been without some pushback from users, of course. As a review of the app on ZDNet notes, Neue received some negative App Store reviews for its decision to charge $1.99 per year for push notifications. (The horror.)

But developer Andrew Stone explained the decision, saying that the decision was about sustainability. “We have to pay for servers,” he said. “That people expect stuff for free will eventually become a problem for most developers.”

Boxcar CEO Jonathan George tells me that several other Twitter apps are in the works, and the company will soon be doing the same with other apps, too. “Any push that requires a backend, we want to power it,” he says.

Originally, the plan was to announce the service for Twitter app developers next week, but a little funding news got in the way, it seems. Although the business offering isn’t officially live now, though, I’m sure interested developers can find a way to get in touch.