Reconnecting with high school classmates is such a popular social networking feature that schoolFeed has managed to carve a registered user base of 10 million out of Facebook in the year since it launched. Today it opens a new feature where users can mail in their yearbooks, have them scanned and uploaded to schoolFeed, and mailed safely back to them.

Led by former co-founder and CEO of RockYou Lance Tokuda, schoolFeed wants to beat Facebook and competitors like Classmates.com by nailing a single critical use case with a free product.

In Facebook’s early days, its Find Friends feature for discovering high school and college classmates was one its biggest draws. With time, though, Facebook has buried the feature in the cracks of its People Search, and it doesn’t always work properly. For older netizens who might be less savvy, that doesn’t cut it. 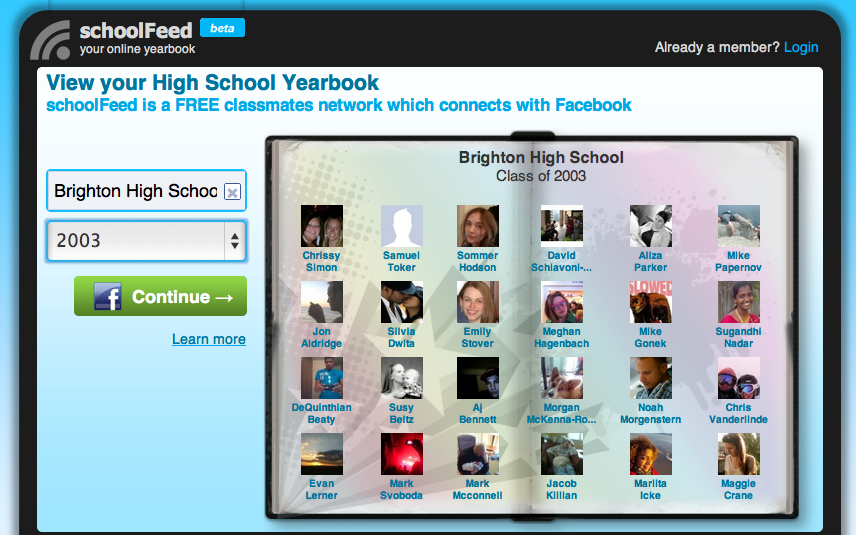 schoolFeed makes finding those classmates as easy as possible. It builds directly off of Facebook Connect with its standalone website and Facebook Canvas app. The first thing users do is enter their high school and class year, and they’re immediately shown names and faces of their old chums. Users can browse a class roster, and follow the activity feeds of anyone they like. Tokuda’s viral chops are evident in features like the schoolFeed Bingo game.

The yearbook scanning feature costs $40, but users technically get their money back in virtual currency to spend on schoolFeed. It’s a clever move for the site. It gets paid, it makes the uploader deeply invested, and it gains valuable content it can dangle in front of the uploader’s classmates. They can view the yearbook — but only if they unlock the pages with in-app activity.