Let’s say you want to use your phone to find interesting new people or reconnect with nearby friends — without revealing your exact location. Glancee is the app for you, particularly if you’re an Android user. And the polished competitor to Highlight is getting a big update today, ahead of South By Southwest. The changes should please the nearly 11,000 users on it already, as well as the people who are going to find out about it at the conference.

The most obvious alteration since I covered the app last month is a nod to location precision. The Radar feature now shows you how many “steps away” somebody is, as measured in number of feet. Before, you’d see people as either “nearby” or as X number of miles away. While subtle, the difference could make it easier for connections to happen. If you only have to walk a few feet to meet someone, you’re more likely to do it than walk half a mile, particularly if you’re in the middle of a giant party in Austin, Texas. 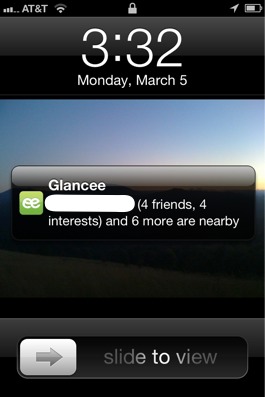 Notifications also include a few more details, in another step to clarify why you might want to talk to a nearby person. They previously just showed the total number of things you have in common with someone, but now they’re broken out by number of friends and interests.

The tighter privacy focus is still there, however. “We still don’t show a map with the exact location of the other person,” says co-founder Andrea Vaccari, an accomplished information scientist. “And we never will, as many of our users have praised us for finding the right balance in making it easy to meet without being too creepy.”

The main interface has been slimmed down to two tabs — in addition to Radar, there’s now Diary. It reveals who was near you before sorted by time. If you’re already using the app, it’ll include people you’ve already been near.

Profile photos are larger. The recommendation engine for nearby users has gotten a few tweaks — it still uses Wikipedia to fine-tune suggestions, but now does so much more quickly. Power users with thousands of friends and interests, like Robert Scoble, should see loading issues resolved.

And, the Android version has been rebuilt from the ground up. The company hadn’t been able to test on every type of device on the OS before, but it has now with the help of its users, says Vaccari. And look for the way it does notifications to continue to improve:

We are testing with different algorithms to send out relevant push notifications. We are working hard towards finding the right balance between being pushy and not being too pushy, and we think we are getting there quickly. This is part of our philosophy of being nice, which seems after all to work well also for our power users. Oh yeah, and we don’t spam your entire address book with sms about Glancee!

And, what sort of serendipitous experiences are users having? Vaccari himself says he is going to SXSW because of it. “I met with Jack Holt, co-founder of whit.li, for a beer at Thirsty Bear, and after I told him I couldn’t find a place to stay in Austin for SX, he invited me to stay with him.” Vaccari will be speaking on social discovery at the conference, which you can find out more about here.

The updated iPhone app and the Android one will both be available tomorrow. 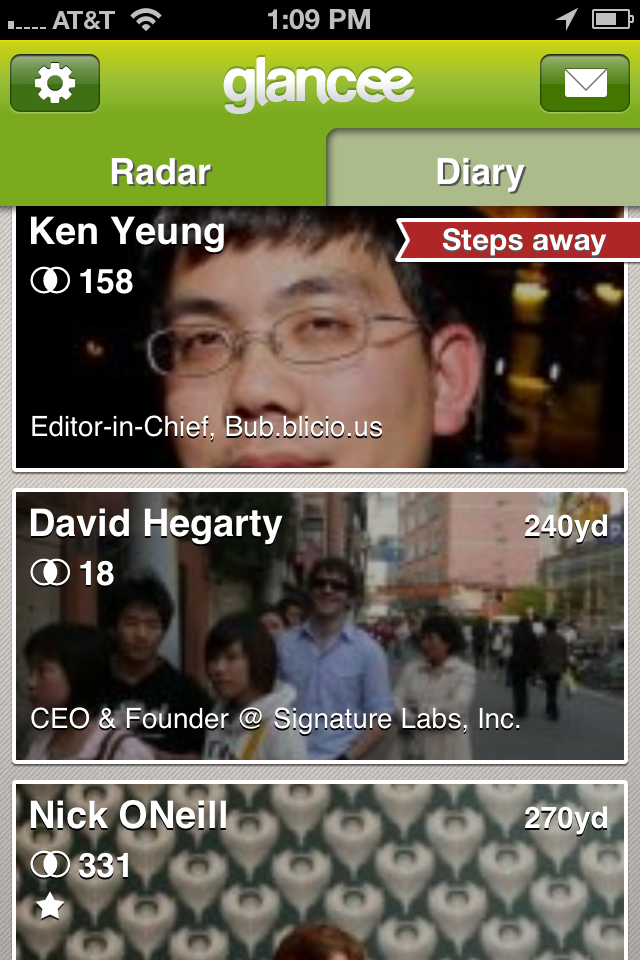