Online and mobile data research company comScore has just released monthly mobile usage data from its MobiLens service, which reports mobile usage stats for the three month average period ending January 2012. One of the notable data points from the report is that over 100 million U.S. mobile subscribers (101.3 million to be exact) are using smartphones, which is up from 97.9 million in the previous period. That’s up 13 percent since October 2011. During the period ending January 2012, 234 million Americans age 13 and older used mobile devices in general. 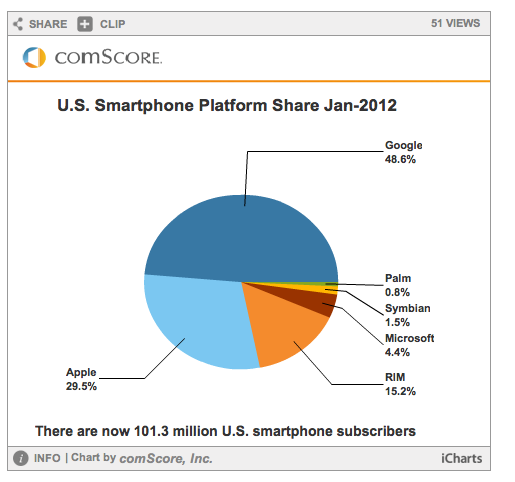 In terms of device manufacturers, Samsung ranked as the top OEM with 25.4 percent of U.S. mobile subscribers, followed by LG with 19.7 percent share and Motorola with 13.2 percent share. Apple’s share was 12.8 percent of total mobile subscribers (which is up 2 percentage points), while RIM rounded out the top five with 6.6 percent. Samsung, LG and Motorola all decreased in their shares for the period, while Apple was the only manufacturer who saw an increase in share.

Clearly smartphone usage is growing by leaps and bounds in the U.S. As we heard last week, Pew reported that smartphone owners outnumber those on lower end devices. And Nielsen revealed that 66 percent of Americans ages 24-35 own a smartphone. 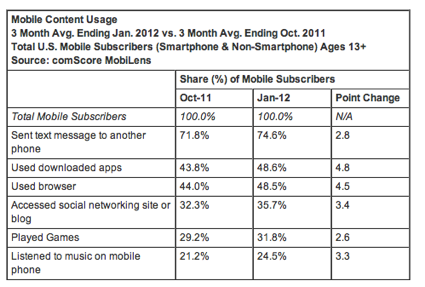