February 24, 2011 was a day that will live in infamy for the team here at Viewpoints. That was the day of the Google Panda update. Up until that point we had enjoyed four years of consistent traffic growth to Viewpoints.com. We managed to double traffic each year and had just reached 2.7 million unique users. We had heard that Google was planning to update its algorithm to penalize content and link farms and were excited about the bump we might get as a result. Turns out we were in for a bit of a surprise.

Viewpoints takes it on the chin

You see, Viewpoints is a consumer reviews and product ranking web site. We have 600,000 reviews of 100,000 products contributed by more than 250,000 members. We have had more than 70 million visits to the site since we launched in late 2007. All of our content is original and we always viewed all of our practices as the “right way” to do things. Apparently Google felt differently because we lost 50% of organic search traffic overnight as a result of the Panda update.

And tries some quick fixes

As the days passed and we sorted out all of the comments from Matt Cutts and industry pundits and watched the Google blog as anxiously as the faithful await the plumes of smoke from the Vatican to figure out what we could do to get back in the good graces of the Google crawler. Was it our ad density? Was it speed of our site? Did we not have the right authoritative back links? Was it that some of our reviews were short and Google was penalizing sites with ”thin content”?

The truth of the matter was that it could have been any and all of these. Although we had hundreds of thousands of great reviews, we had probably let some slip through that did not deserve to be published. And we had not paid enough attention to speed, ad density or other hall marks of a good user experience. So we set out to fix our Google problem but at the same time, we resolved to think bigger and longer term and use this opportunity to create a better user experience, regardless of what Google was looking for.

So now you can judge the results for yourself. We have spent the last 12 months as a team of 25+ professionals reinventing Viewpoints. From March to June we removed 40% of the ads across the site. We improved the speed of the site by 3x. We moderated out 80,000+ reviews that did not meet minimum quality standards. Unfortunately these changes had only a nominal impact on traffic. So we decided it was time for a more radical approach.

After making the changes listed above and 90 days after Google’s Panda update, our team decided to devote six months to a total overhaul of the Viewpoints.com user experience. This was not just a visual redesign but a soup-to-nuts, top-to-bottom overhaul. We ended up making 30 major changes to the user experience. This entire effort was basically a bet the company decision. It had been four years since we first launched and the reality is that the world had changed. It was time to question even some of the most fundamental assumptions.

In addition to eliminating 80,000 reviews that did not meet our new quality standards we also decided to eliminate stand alone review pages for all but the longest reviews. This one decision removed 600,000 pages from the site. We also decided to treat very short reviews differently. A new minimum threshold was established for when a review would become publicly accessible. If you want to review a product and say “It’s awesome!” that’s fine, we just don’t think your two word review helps other consumers enough to warrant publication. We also made the tough decision to exit more than 300 review categories that had more than 90,000 reviews. We decided strategically to focus on product reviews and retire hundreds of non product review categories such as hotels, restaurants and movies. All of these decisions to improve content quality together eliminated 20% of all reviews and completely eliminated short review pages in favor of very comprehensive product pages.

We don’t know if Google will notice, but we do feel that we have addressed the issue of “thin” content the best that we can.

In addition to eliminating “thin content” we also focused on the overall credibility of a site. Google suggested that site owners need to put themselves in the shoes of users and ask the question “Would I trust this site with a health issue or my credit card?”

For Viewpoints, this meant cleaning up the content as outlined above as a first step, but it was also time for a redesign that was cleaner, simpler and better conveyed the credibility, quality and overall helpfulness of the site. In addition to eliminating 40% of the ads on the site, we also stripped out 15+ features that were clouding the core value proposition of consumer reviews and product rankings. For example, we made the decision to stop giving scores to products that did not have enough reviews. And we made it clear when members had connected their account to Facebook to demonstrate an extra layer of authenticity of the reviewer. You can see the following screen shots for some examples of the old design and the new. 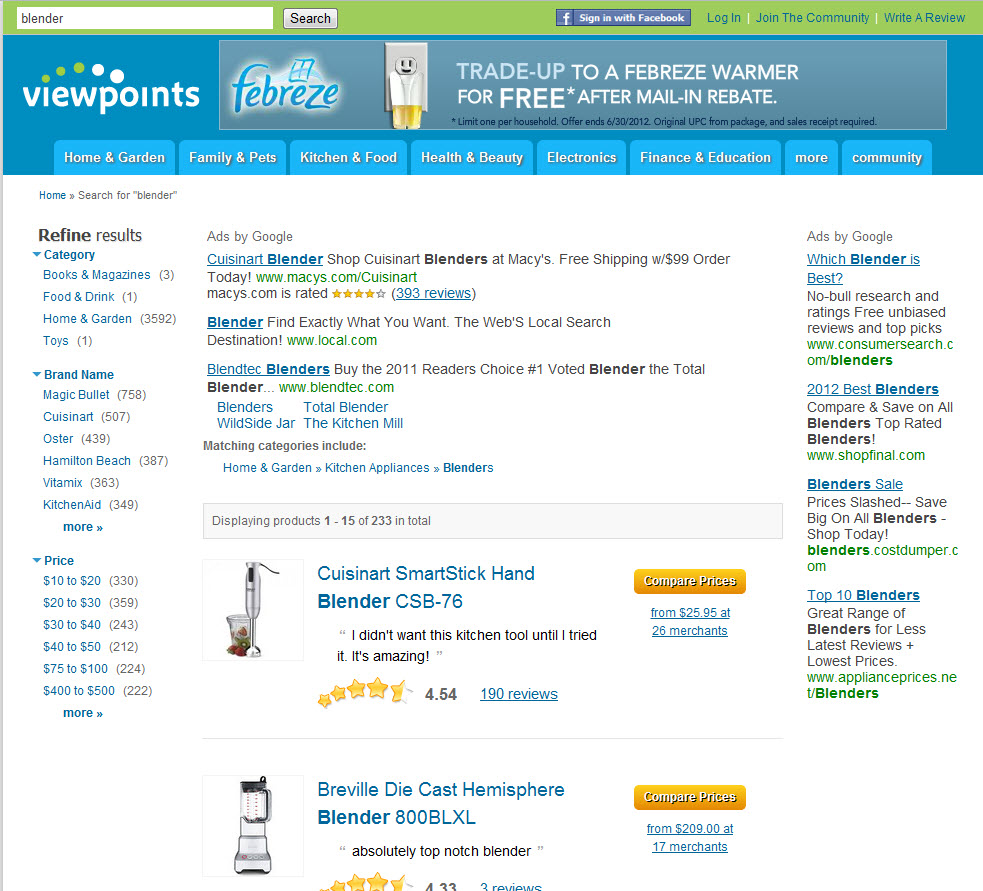 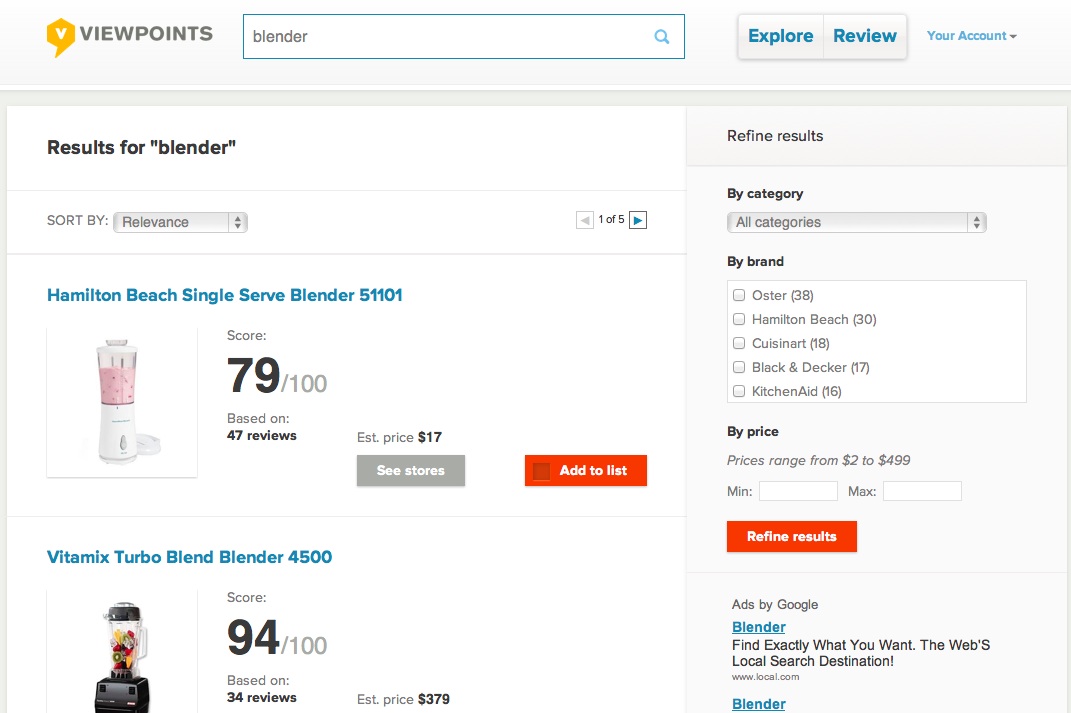 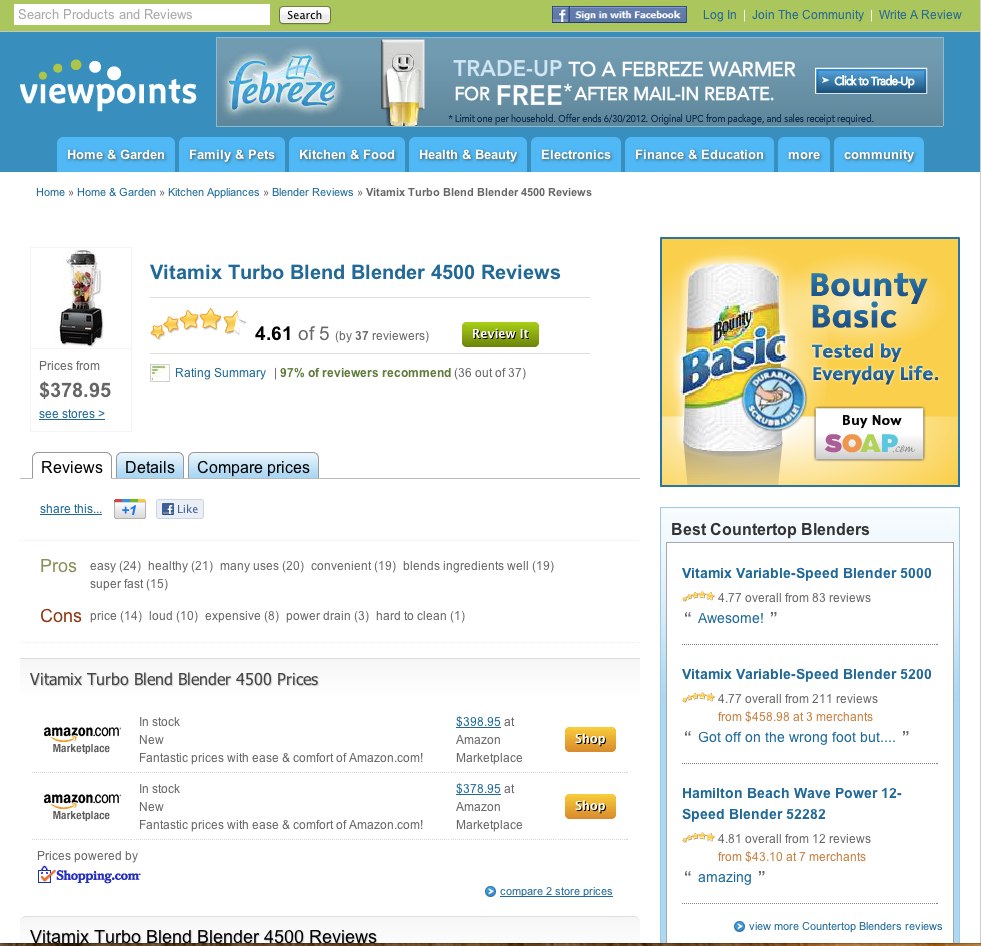 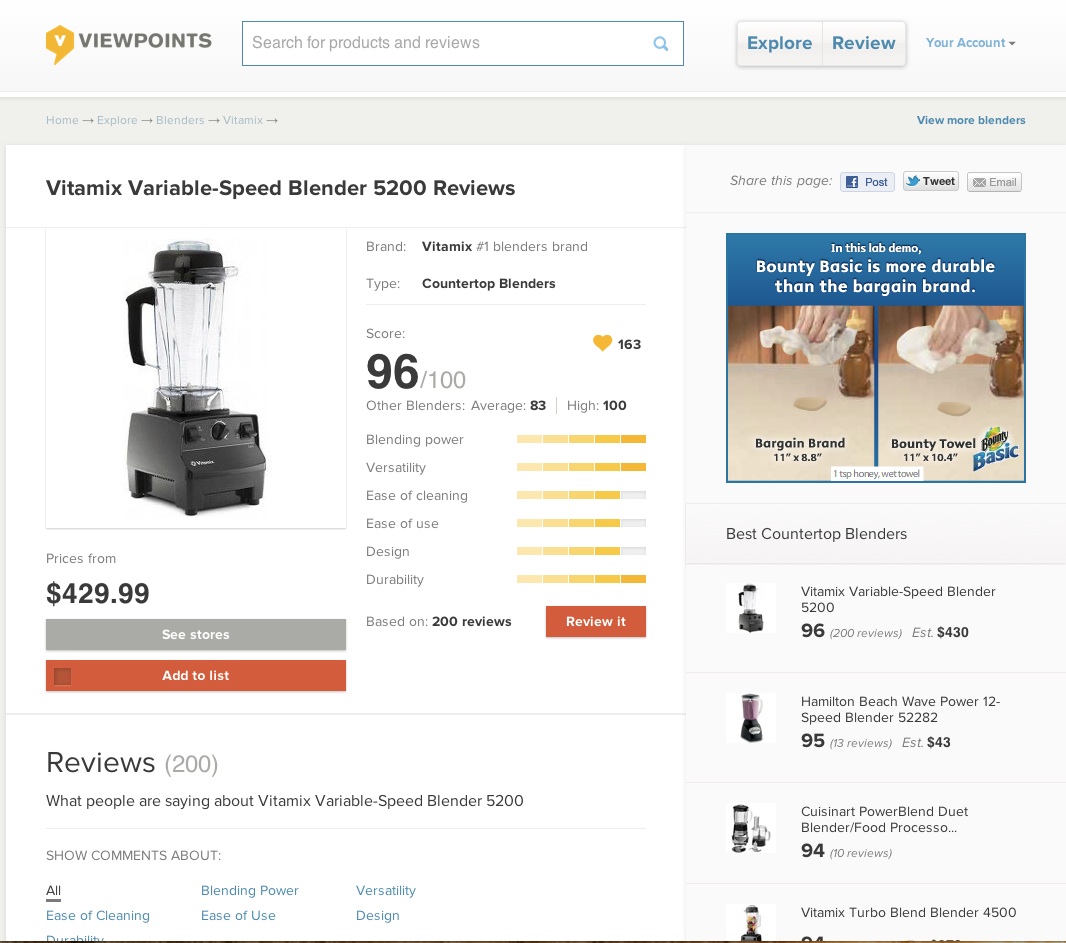 So we have addressed content quality, site architecture and site credibility. But were we adding enough value to distinguish ourselves in a crowded market? Good question! While we firmly believe that getting the basics right (quality, credibility, ease of use etc) is the key to a great consumer reviews user experience, it became clear to us that there was another important way we could distinguish the Viewpoints user experience. We saw an opportunity to occupy the white space between expert reviews that make clear buy recommendations and the mass of consumer reviews which gave great consumer feedback but did not always help give a clear and concise buy recommendation.

We call this “Product Intelligence – for the consumer by the consumer“. We have spent a significant amount of time and resources developing scoring and ranking algorithms to smartly rank products against each other so that shoppers know what product to buy.

As much as these changes were done to improve the user experience and in turn improve our rankings with Google, we also explicitly wanted to optimize mobile and social as two new channels that can be a new source of growing traffic to help us build our audience. The changes we made in these areas were very significant. The specific changes will be detailed in a later post.

So, that is how Google’s Panda update changed our business. It drove us to improve the quality of content, improve the credibility and trust of our experience and invest in Product Intelligence as a distinct point of difference in the market.

We don’t know how Google is going to respond to these changes but the important thing to note is that every change we made improved the experience for the user. So as disappointed as we were with the outcome of Panda, we will admit that it forced us to think harder about our business, about adding more value to the end user, and perhaps most importantly, take our game to another level. Game on.